I wonder why this picture was taken? It's just a street scene of several bikes parked up.  The Vespa in the foreground that the chap is starting has 'Berlin, Turkey, Istanbul' written on to the front mudguard so perhaps he is the intended subject. There's surely an interesting story behind this much travelled scooter.

Also slightly anomolous in the line up is the Harley that's peeking out from under a cover. It has springer forks so would be slightly out of date by the time the photo was taken. Perhaps it is an ex-WD model that has been civilianised and lightly customised?

The street sign in the background is quite blurry but by zooming in one can read Hallam Street W1. Hallam Street is close by to Harley Street and in the West End of London. The second picture is of the building in the photo as it is now from Google Maps. It took a while but was identifiable by the dsitinctive railings which happily still remain in place. 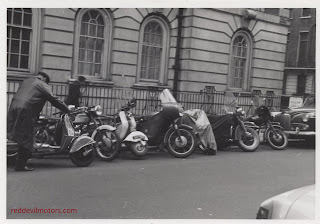 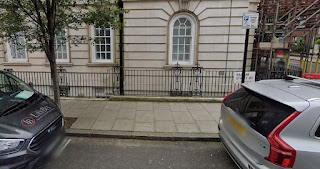 Posted by Richard Miller at 4:17 PM