An old snap of a launch type sidecar as was fashionable in the late twenties and through the thirties. Top marks if you can identify the make of bike or sidecar! Personally I have no idea..

Posted by Richard Miller at 2:41 AM No comments:

I can't remember how or when I got my hands on this magazine but it was a long time ago, it was already old when it came to me. I remember flicking through it as a teenager, it was an exciting window on a whole different world. A world that was completely alien, one I didn't feel any affinity for or want to join but that held a strange fascination.

Definitely a sensationalist rag written by 'citizens' for 'citizens', prurient, glorifying and disdaining all at the same time. The whole thing somehow reminds me of the bit in Fear and Loathing in Las Vegas when the guy at the cop convention is describing the levels of hip of the marijuana user. The main lesson though is that if you have a chopped Panhead and can ride in California with long hair and beard in the wind then you can be pretty cool, if you are from Birmingham, ride a knackered old BSA with apehangers and wear a second world war German helmet then no, sorry, it doesn't work.

Posted by Richard Miller at 12:01 AM No comments:

Here's the brochure for the DDRs finest from 1974, the MZ TS150. Never had an old MZ, or at least one that worked properly and was on the road. Folks speak highly of them, must give one a go some day...

Posted by Richard Miller at 1:34 PM No comments:

This well dressed chap featured in a series of postcards from the late forties / early fifties. Possibly of Dutch origin the series follows a storyboard based on motorcycle fettling, speed and a police stop.

It would be great to know more about this chimp, a bit of investigation has yielded an image of him also riding a bicycle so he was without doubt a talented fellow.

Posted by Richard Miller at 12:16 AM No comments:

These Harris Matchless G80s never used to appeal to me until I had a go on a Rotax-engined bike and realised what a sweet motor it is. Personally I shouldn't like to have one without an electric start and have to use a left hand kicker so the later model with the leccy boot and twin discs would be the one to go for. Transplant a 52 horse 604 motor from a CCM and you'd have a really fun bike.

Posted by Richard Miller at 7:59 AM No comments:

Chap decided to be a bit different and spent his money on a MkIV Douglas. I wonder if he was happy with his purchase?

I'm sure there are folks out there who can correct me if I'm wrong but I reckon this dapper gent is the proud owner of a 250cc sv Raleigh Model 15 from 1930.

Posted by Richard Miller at 11:26 AM No comments:

Thanks Karl for getting in touch to give the correct identity of an old photo of a thirties Norton that I posted up. He restored and rides an example of the exact same year and model. A beautiful bike, many thanks for the pictures. 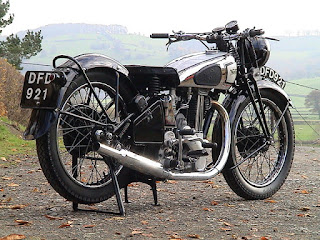 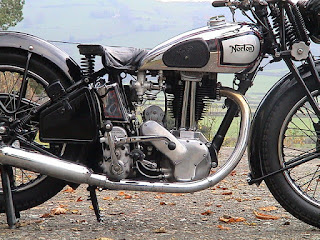 Posted by Richard Miller at 12:35 AM No comments:

A few years back now I imported old British bikes from India to the UK. Mostly ex-WD and pre-war bikes. Back then the supply was fairly plentiful and the prices right. Those were times before the internet was all pervasive so local folks had very little access to pictures of how the bikes looked when new to help restorations and no clear idea of prices in Europe. Nowadays that of course has all changed, few bikes restored in the last ten years don't carry at least on or two parts made by the Indian repro parts industry. Indian restorations are far higher in quality than they used to be and the scene there is so big that prices can be as high as Europe and there is even a small flow of bikes going back over to the sub-continent.

These pictures I dug out recently and are from a buying trip to Delhi back in '99.

Posted by Richard Miller at 12:40 PM No comments:

Single page flyer for the James 1963 competition models. The owners of James, AMC, had introduced their own Piatti designed two-stroke power units in 1957. The AMC motors were largely unloved and by '62 Villiers engines were available again in some of the competition models. In '63 you could only buy a competition bike with a Villiers motor. 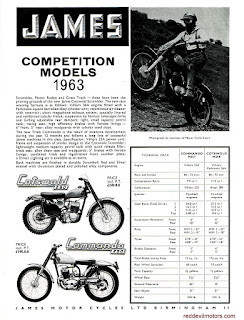 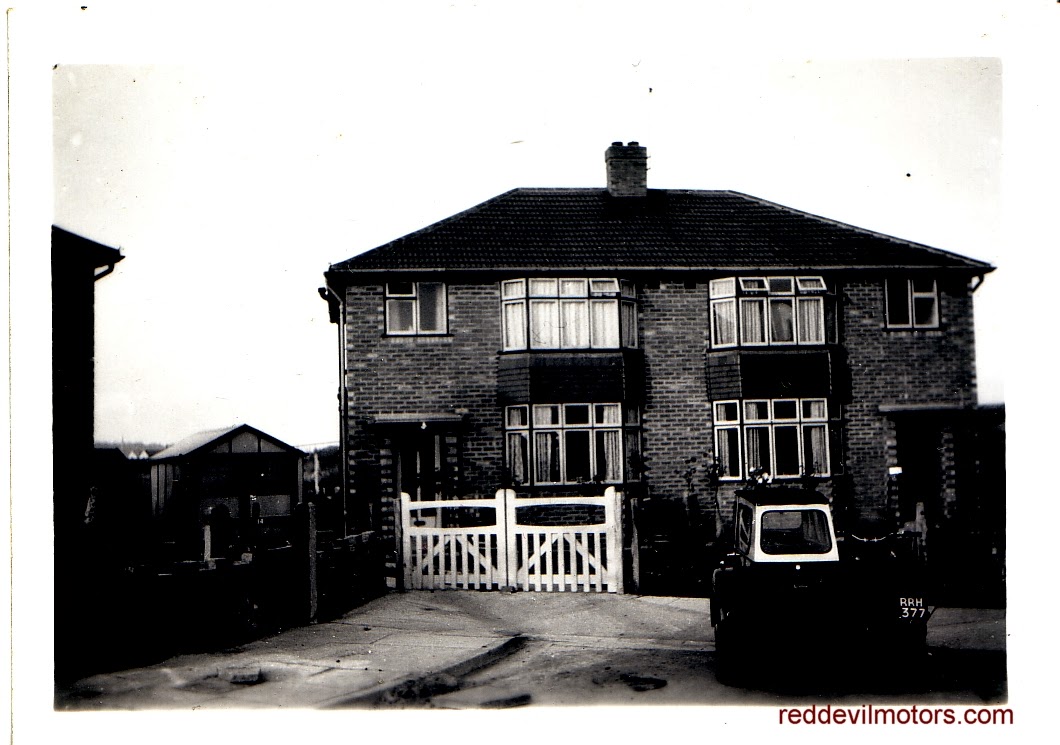 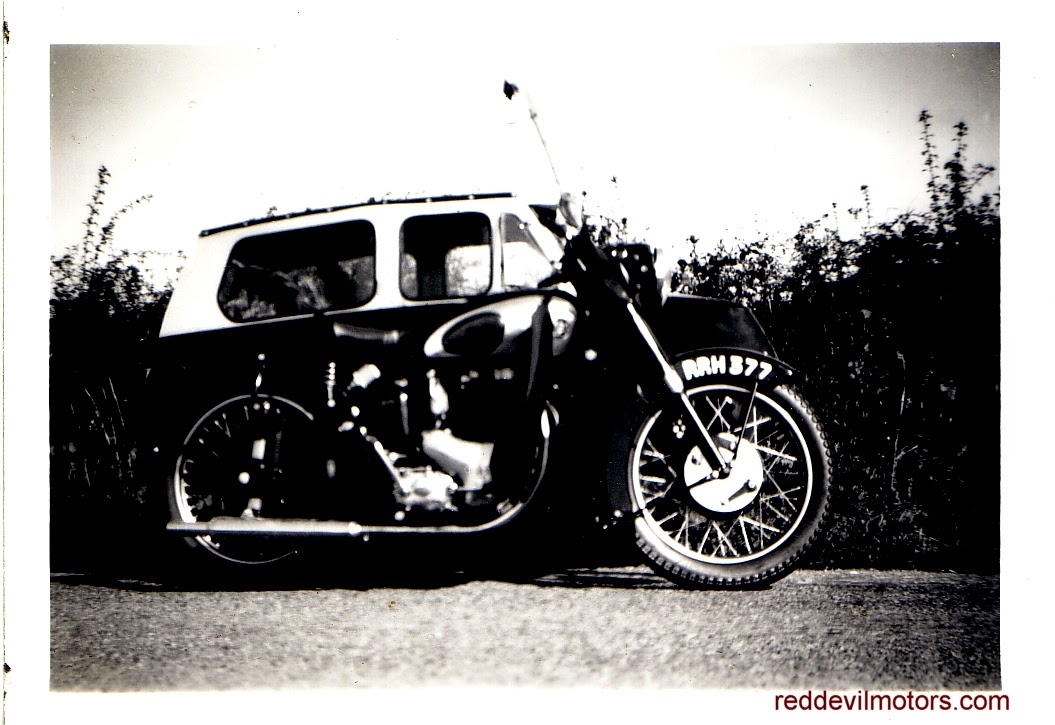 Posted by Richard Miller at 9:48 AM No comments:

The Gilera needed a good test ride to see if it was charging ok and a run over to the Halsey Arms for the Dorset VMCC's evening Pie and Pint Run seemed like a decent excuse. Here's a few pictures from the evening.

Posted by Richard Miller at 8:44 PM No comments:

Set off on Saturday afternoon for the second Back to Basics Summer Camp up in the Malverns, a ride about 125 miles North from home. The rally is strictly pre-75 bikes only, Phil has an array of eighties machinery but lacking anything earlier borrowed the Norton Dommi. I had planned to ride the Enfield J2 but was not 100% confident with the way it was running. My father's trusty Triumph 3HW stepped in at the last minute and doomed Phil to a third gear 40mph cruise on the Dommi with the gentle aroma of burning oil to scent to the air.

The way up was marked by being slightly colder than expected and for the several bum turns I navigated us on to. I blame signposts and ring roads but whatever the case 40mph up the M5 on a 70 year old bike is not cool. Thus we arrived at past seven. Matt and Gary were already there, Matt's now faithful A10 combo providing the wheels. Strangely Gary preferred to ride in the chair rather than on one of his own machines.

The concept of the rally is of an old school event for old bikes, a pub, a field and no caravans or motor homes. The atmosphere was good though the pub emptied earlier than events of days gone by. Maybe Friday was the big night for most folks.

Altogether a recommended event. A good chance to load the bike up, ride, meet friends and catch up with a few familiar faces. Here's a handful of snaps from the weekend.


Posted by Richard Miller at 8:32 PM No comments:

The last mod to the Gilera's 'silencing' system took away perhaps 1db. I had thought that a baffle tacked on to the down pipe would be a surefire way to reduce noise but a plan b was necessary. Ever willing not to spend money a second baffle worked out a lot cheaper than a new complete silencer. This one was bought from the bay of e for a mere eight quid. The tail of the silencer is 50mm (it is basically a megaphone). The best match I could find was a 47mm baffle. This fitted with the addition of some shim and application of persuasion with a big hammer.

Finally the beast is tamed. The Gilera has been muffled down to a slightly angry roar as opposed to a full blown scream from the pits of hell. Still loud enough to annoy the haters but the volume is down enough that it hopefully won't attract unwanted attention from the fuzz... 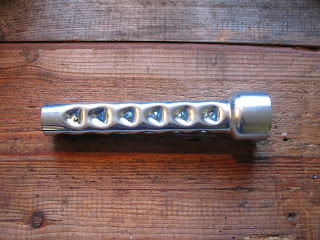 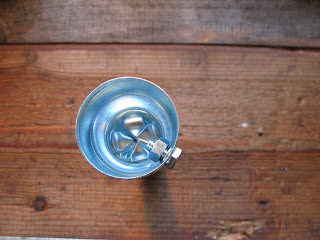 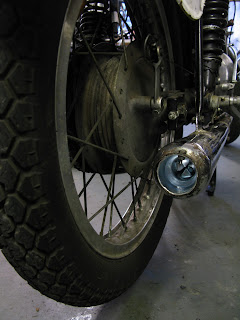 Posted by Richard Miller at 10:30 PM No comments: