The first day of the Picos Tour through the Picos Europas. It took a while to leave the coastal urban sprawl but the effort was worth it passing first fabulous surf beaches and then winding up into the mountains for breathtaking scenery. The day finished up in Potes for an overnight stop with the now customary huge meal!


Posted by Richard Miller at 8:44 PM No comments:

Sunday, I'd thought this was a free day but there was a run organised. A nice bonus. A cracking ride through the mountains, perfectly route marked, that ended up with a paella by the sea. Perfect.

Posted by Richard Miller at 7:36 PM No comments:

Arrived in to Santander for the MC Piston Rally in the early hours after a twelve hour drive down from Cherbourg. A free day so relaxed and took the Bantam for a spin around town. Other folks started to arrive late afternoon.


Posted by Richard Miller at 4:42 PM No comments:

A bit dog-eared but unusual to see a photo of a thirties Panther. This one looks like it is loaded up ready for touring, those upswept exhausts look the part but make luggage carrying a pain...

Posted by Richard Miller at 11:57 AM No comments:

The trusty Bantam, veteran of two Moto Giros and several VMCC sprints, is being prepared for a jaunt down to Spain (not under its own steam, that would be pure masochism) for the MC Piston Santander Rally.

A couple of the special parts on the bike came from Peter Savage, namely the CDI ignition and the MZ conrod conversion. Both have given really excellent service. A while back the clutch started slipping so I got in touch with Peter to buy one of his eight spring clutch conversions. The delivery time was a few weeks so at the same time I bought a set of extra strong springs from Rex Caunt. Life being as it is the stronger springs were fitted, they worked and then the eight spring conversion arrived. The conversion has sat on a shelf in the workshop for a good year. I always knew that I should get around to fitting it though, the stronger springs are an effective but slightly brutal solution, a harder pull at the lever and more stress on the system. The eight spring conversion is certainly the engineer's remedy.

Taking apart a Bantam clutch is simple, putting it back together is not so easy. I had forgotten that it was designed by the Satan Engineering Design Consultancy. There is no way that one normal man can compress the eight springs enough to insert the circlip which holds the whole confounded thing together. There is a special tool but it is designed for dismantling rather than assembling. It's made even more difficult by the fact that the tool is designed to be used without the primary chain fitted but that the new primary chains are endless so you have no choice but to fit it in advance. I found in the end that the procedure could only be accomplished with extravagant swearing and several occurrences of the clutch exploding across the workshop like a grenade. The newly made tools also seem to be very flimsy in comparison with older ones, a good tip is to hold the jaws of it together with a g clamp to avoid them letting go at a vital moment...

Once fitted though the eight spring conversion is a useful piece of kit,. There's no slip and the clutch maintains a nice light action. The same conversion fits all models of Bantams. Thoroughly recommended.

Posted by Richard Miller at 10:41 PM No comments: 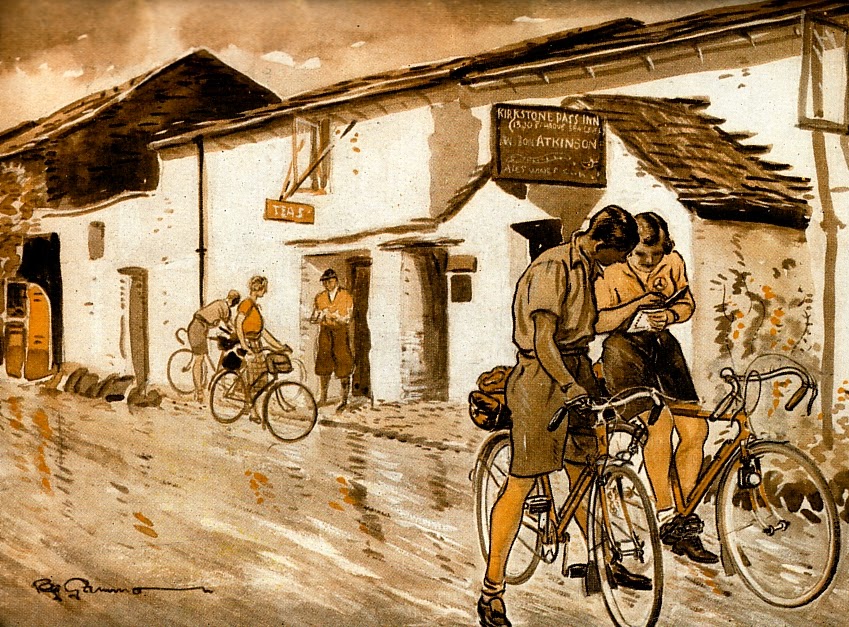 Content on Red Devil Motors has been growing and growing - 308 posts and counting. Navigation around content on a blog is always a bit of a problem but current content is the nature of the beast. There's the tag cloud on the right hand bar but there are only so many tags you can use before confusion reigns. To cut the story short I've decided to henceforth put all bicycle content on to a separate new blog.

Personally I enjoy running a blog that is so eclectic in nature, however I appreciate that there are not so many folks out there deeply in to both vintage bicycles and motorcycle so it seems like the right thing to do now is to go more specialised.

Vintage Bicycling will follow the same formula as Red Devil Motors - vintage photos and brochures, rides and events, mechanical woes and workshop tales. For now the Red Devil Motors Facebook page is going to stay with both pedals and engines.

Please take a look at

Posted by Richard Miller at 10:43 PM No comments:

There are quite a few vintage Norton aficionados out there so hopefully someone will correct me if I'm wrong but I'm saying a Model 18 from 1930.

Posted by Richard Miller at 1:55 AM No comments:

Terrible photo but interesting just to see the field in a late fifties / early sixties 250cc scrambles event. Looks to me like the majority of the runners are Greeves.

The last couple of watercolours from Gie in Belgium. Thanks again Gie. 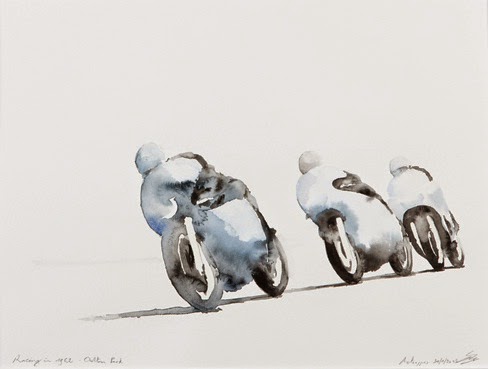 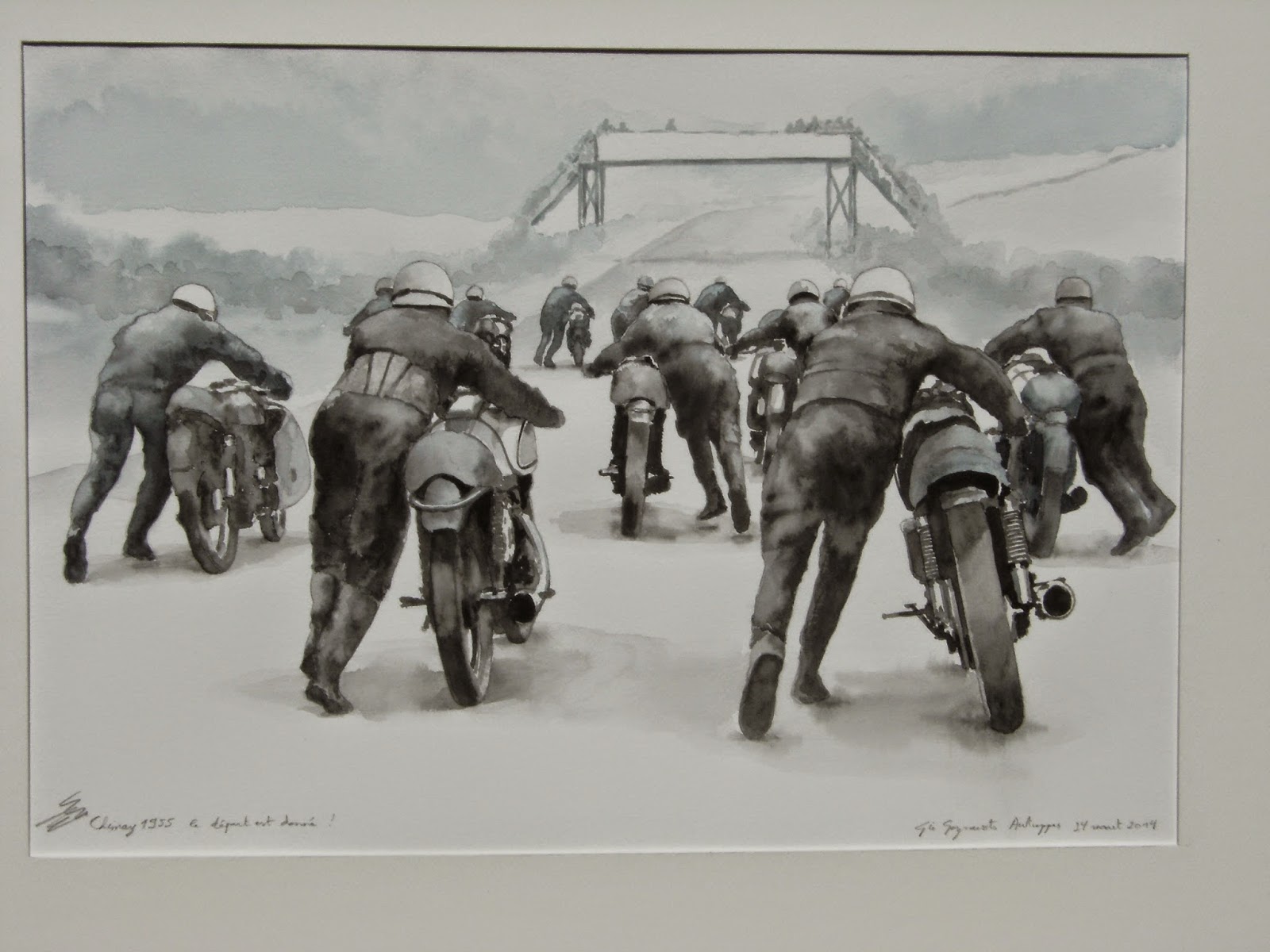 Posted by Richard Miller at 4:00 PM No comments:

How did they both get there with the bike when it has no pillion seat? Period photo of a flat tank Douglas. I would guess the model as an EW and the year as 1927 though if there are any Douglas experts out there who know better please comment. The EW was available as a 350 or 600, both fore and aft horizontally opposed side valve twins.

Posted by Richard Miller at 5:58 AM 2 comments:

One more painting from Gie Goyvaerts in Belgium. This time a Rob North Trident.

Posted by Richard Miller at 5:03 AM No comments:

Many of the well known motorcycle manufacturers began with bicycles and in many cases continued with their cycle range alongside their powered two wheelers. James was one such manufacturer and whilst they were never known for sporting motorcycles their bicycle range always had something for the clubman.

The James has information folder which includes a letter from well known cycle specialist Hilary Stone. The background to the cycle is more in depth than I can give and there seems little point in paraphrasing it so here it is verbatim:
"This c 1923 James racer is a rare and important machine - it is one of the first factory built machines in the new lightweight style after WW1 - brazed up straight tapered chain and seat stays, 26in wheels and lower bottom bracket. This style copied from Bastide by the small lightweight builders immediately after WW1 spread to some of the bigger manufacturers such as James and New Hudson by 1923. The special quick release was the fashion of the early 1920s; the fishtailed lugs were one of the many improvements adopted around the time."

Points I would like to add are that the Resilion cantilever brakes are not an original fitment - they were not introduced until 1929. It is more than likely that the machine had no brakes at all when new, the addition is however a very sensible mod! The lamp bracket is a nice touch but the J on it stands for Jagrose (a cycle accessories brand) rather than James. The hubs are original though the rims have been replaced and respoked when the old ones rotted away and finally the toe straps are copies of originals.

The James is a thoroughly useable bike if you don't mind fixies. The ride is not significantly different from a machine thirty years its junior. All in a fine piece of cycling history.

Posted by Richard Miller at 5:50 AM No comments: