A thoroughbred and no doubt. Vincent Series C Rapide. I'm going to hazard a guess that the lady alongside was not a passenger from her atire. She might just be a passer by wanting to have her picture taken with motorcycling royalty!

It would have been lovely if the bike was still around, after all Vincents have a rather high survival rate which is growing all the time, but alas LLN 708 doesn't feature with DVLA in Swansea. Perhaps it has had a plate change or been exported.

A significant location motoring-wise and one that looked familiar when I first saw the picture. I only recognised it because I was there recently (riding nothing so glamorous as a Vincent, just my humble Enfield Himalayan). The walls are those of the Montagu Estate, home of Lord Montagu and, of course, the Montagu Motor Museum. The view is on Palace Lane looking towards the weir on the Beaulieu River.

Posted by Richard Miller at 5:36 AM No comments:

In my humble opinion the 6, 7 & 8E series engines were Villiers' finest. First came the 6E and then in '53 the 7E (competition version) and 8E. I've experience of all three and have never worked out any particular difference between them apart from the stampings on the crankcases! They are 197cc long stroke two stroke motors and are, quite honesty, significantly more pleasant than a BSA Bantam. The gearboxes are semi unit and bolt on / bolt off and available in three, four or three with reverse options (these motors were popular for microcars). Very flexible, easy to live with and work on with quite a surprising turn of speed a 6E engined bike makes a great classic for bimbling about on back roads.

Posted by Richard Miller at 4:44 AM No comments:

More pictures of the recently acquired 1905 or 6 Peugeot Model A. A basic cycle but light and stylish, I like it rather a lot. It is rusty but certainly not beyond repair or in fact in any way unsound, just a few spokes missing. It looks like perhaps the original colour was a dark green, though it is hard to tell. No brakes are fitted but it seems from the original catalogue spec that they never were - quite scary as it is not fixed wheel.

It's always hard to know when to repaint and restore, I tend to shy away from re-finishing. I quite like rusty two wheelers and for me as long as it works properly a characterful patina is most welcome. That and the fact that I am not much good at painting and a full restoration costs a lot more. Hence this Peugeot shall have the loose rust removed, be preserved with a coat of Renaissance Wax and made rideable. I shall try to find a sympathetic cable operated front brake to give me some stopping capability. Hmmmm.... the bicycle projects are stacking up.

Posted by Richard Miller at 1:00 PM No comments:

Bit of a knackered old photo this one but it's of a cammy Norton so what the heck...

The bike carries a New South Wales reg plate and my best guess as to year and Model is a CS1 from 1935 but stand to be corrected by any of the pre-war Norton afficianados out there. The Norton logo on the petrol tank isn't standard and has been hand painted, I wish the image was sharp enough to read what has been written underneath the logo.

Posted by Richard Miller at 6:48 AM No comments:

This drawing of a magdyno came to me with several other cuttings in an old book. I've no idea of its source but it's a nice thing and worth reproducing here...
It's a pre-war model of magdyno and I think is an MDV which was current mid twenties to early thirties.
Posted by Richard Miller at 4:55 AM No comments:

First time off road impressions of the Himalayan

I bought the Himalayan as a 'do it all' bike so with fine weather beckoning me out a few weeks back taking it off for a day out on the Wessex Ridgeway seemed like a good plan.

I've been riding along the Ridgeway for years now on and off. As a seventeen year old I used to thrash my poor old D1 plunger Bantam along it, more recently the (now departed) Yamaha AG200 was used for the same purpose and accomplished it with somewhat more aplomb. If a standard D1 Bantam can tackle it obviously the Ridgeway is not, for the most part, particularly technically demanding though it can get so in wet conditions. This time I joined the Ridgeway by riding up the cart track from Tollard Royal village. Initial impressions were, as expected, of ease and comfort from the Himalayan. There wasn't really any call at all to stand up on the pegs.

Pleasant is a word I find myself using to refer to the Himalayan quite a lot and so it proved to be on the Ridgeway. Burbling along the undemanding sections was a happy and relaxing experience. Despite the amazing weather the Ridgeway was far from busy and the Himalayan did nothing to disturb the calm. I've got the standard exhaust fitted and have no intention to change it, the bike runs smooth and clean, plus it is quiet. This is a massive bonus when mixing it with walkers and horse riders. A steadily ridden bike with an unobtrusive exhaust note definitely promotes better harmony.

In the few spots where the going got a bit tougher the Himalayan acquitted itself reasonably well. The weight of the bike became quite evident and given this the low seat height was a boon. As with all these things, it's a compromise, slightly lighter might be nice but then the bike would not be so relaxing at 70 on the motorway and of course would cost significantly more... You can't build a bike for all shapes and sizes and, though the Himalayan is generally comfortable for me at six foot two, when it came to standing on the pegs I found the handlebars to be slightly too low. Some risers are on the shopping list.

On a couple of ocassions avoiding the deep water was impossible. We went briefly as deep as the base of the cylinder barrel, there was a fair old bow wave so the air inlet under the saddle was kept well out of it and no problems were experienced at all.

One problem that has been reported elsewhere is the lack of off switch for the ABS. All I can say is I confirm this, it's a bit disconcerting to ride down a slippery slope with the brakes automatically disengaged... 2021 models have a switch and I understand that it's an easy job for the home mechanic to install one on earlier models. Something I'll have to do before the bike does its first long distance trial. 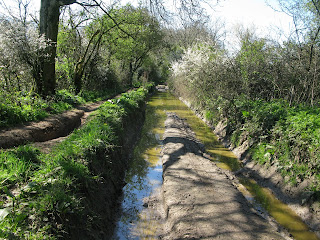 We rode the Ridgeway as far as Salisbury and then took to the road for a short while before joining it again near the Chalke Valley for the ride back home . This is where the Himalayan shines, as a dual purpose bike it is a peach, most capable off-roaders are a bind to ride on the road but Enfield have struck the on / off road balance pretty much spot on with the Himalayan. 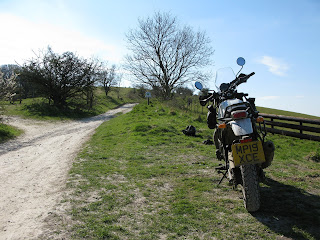 All in a ride of some 70 miles, about half of it off road. The Himalayan acquited itself well and I'm looking forward to our first long distance trial together. In the meantime the Trans Euro Trail beckons this summer.

Posted by Richard Miller at 8:51 AM No comments:

It's in the title. Three old pictures of folks on their bicycles that are probably disconnected and that I can offer no further information than they seem to take their cycling seriously and are dated between the thirties and fifties. 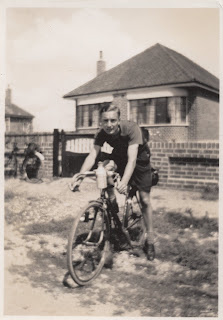 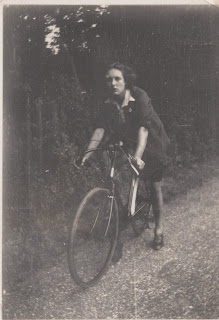 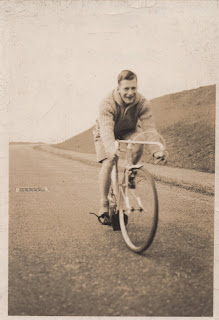 Posted by Richard Miller at 1:54 PM No comments:

Easy to recognise the bike as a BSA, the background looks slightly industrial and the photo is annotated 'Dover April 1926' on the reverse.

The HB prefix number plate is apparently from Merthyr Tydfil in Wales.

Hard to say the year of the bike but it seems more than likely from the mid twenties as it is still in rather nice condition and the model is probably a H. Enlarge the photo and look carefully and you can see a Cowey type klaxon on the top tube.

Posted by Richard Miller at 8:27 PM No comments:

Slow but sure progress on the 'Africa Bullet'.

Essentially the only parts that left the factory together on this bike are the engine, gearbox and swinging arm. As with any mix and match project much time has been sapped in making the various odds and sods match together properly and in making up brackets and spacers.

The bike is going to end up looking like a fairly different machine from the one that I went around Africa with but hopefully its essential character will still be there. As a bike that is going to be used, used hard and used year round I've thrown as much stainless steel at it as I can afford to. Previously all components were red but I've chosen to do the frame, forks and bracketry black, mainly to save money and for ease of home painting. The tool boxes, petrol tank and rear number plate are all at the local powder coaters at the moment for a coat of signal red. Perhaps the fork shrouds would have been nice done in the same colour but they already had a decent coat of black so have stayed that way.

The bike certainly isn't going to be ready for riding this season but hopefully we'll be on the road and out and about in 2022.

Details under each picture. 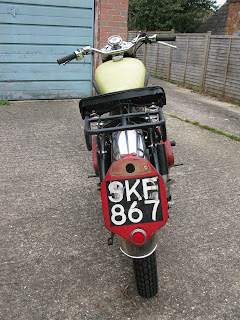 Posted by Richard Miller at 2:16 PM No comments:

All the gear and the machine to match. This German fellow is astride a Zundapp K500, a model introduced in 1933. Already dark times in Germany presumably this photo was taken before the war however. What is going on though with the spiral painted signpost?

Posted by Richard Miller at 1:50 PM No comments: