Up for sale on ebay UK at the mo courtesy of Paul Milner is this rather wonderful and unusual Tynesider pillion seat. The Tynesider is for sidesaddle riding and surely can only really have been intended to use with a combination. The mini chesterfield style is charming and puts Goldwings to shame!

The fitting seems to be on a pillar rather than rack but due to the weight it would seem that more than one mounting point would be wise.. It's not cheap but try an find another: museum piece is a phrase often banded around but here it is certainly true. You've still got a week to bid here at time of writing.

There's nothing out there about the Tynesider but Occhiolungo has an article on veteran era pillions. 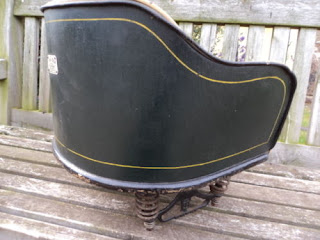 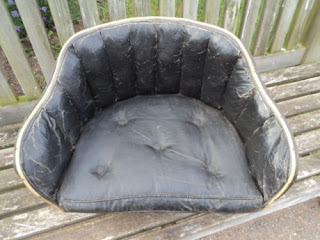 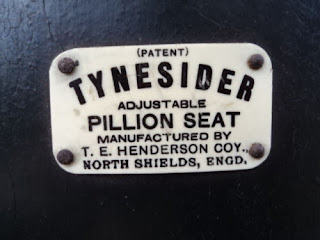 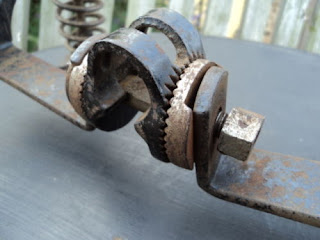 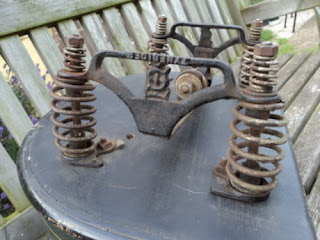 Posted by Richard Miller at 8:36 PM No comments: 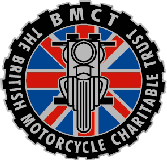 If you read the blog regularly you may have noticed that there have been a few postings of museum visits of late. The reason behind this is that I've recently put hand in pocket and joined the British Motorcycle Charitable Trust. A £20 membership fee opens the doors to a number of the nation's finest motor museums completely free of charge and helps support a worthy organisation helping to preserve British bike heritage.

I'm lucky in having several museums - Beaulieu, Haynes, Sammy Millers & the Tank Museum pretty much on the doorstep but membership is well worthwhile even if you visit just a couple a year. If you are coming over to the UK for a visit, consider joining up and gorging yourself on motorcycle museum loveliness. All that and a quarterly magazine thrown in to the deal.

Email ThisBlogThis!Share to TwitterShare to FacebookShare to Pinterest
Labels: museum

The 1959 James range. 'Money saving motor cycles' isn't really a strap-line to shift a lot of units nowadays but presumably tempted a lot of folks back when motor cycles were everyday transport.


Posted by Richard Miller at 8:46 PM No comments:

This post marks the return of bicycles to the RDM blog. Setting up the Vintage Bicycling blog seemed like a good idea at the time but it's been taking up too much time trying to keep up with content for both blogs. Blog writing is fun but not when it impinges on workshop and riding time...
__________________

Anyways, on to the subject in hand. This little gem is a testing meter provided to mechanics by Raleigh Industries for testing the Sturmey Archer Dynohub. Really just a dressed up voltmeter it tests voltage on the battery, output from the dynohub and continuity of wiring. 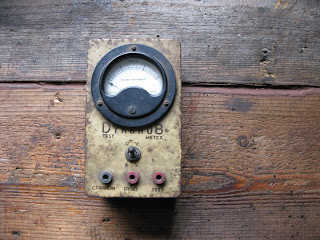 Great photo from the fifties or sixties of a wall of death bike and rider. The guy looks comfortable with the bike so it would be a good guess that he was a wall rider. Anyone out there recognise him?

Rigid framed BSA A7s were the post war British bike of choice for the wall after an Indian. They seem to have been used at several different walls, notably with Tornado Smith at Southend and at Margate. I've seen pictures with the BSA logo painted on to the wall itself so presumably BSA were sponsoring walls at one time.

Any further info on the picture gratefully received.

Posted by Richard Miller at 8:52 PM No comments:

The Clipper model name was used postwar by Royal Enfield for cut price versions of existing models and parts bins specials. The earlier Clippers were essentially Bullets offered with Model G engines or a version of the pre-war 250cc Model S. Both of these bikes were distinguished by having their oil tanks in front of the engine rather than behind as for the newer models, this plus the motors being all iron instead of having alloy heads.

It seems rather like Royal Enfield were trying to use up overstocked parts in creating the first Clippers. They might have expanded their market in producing cheap bikes but did they do damage to their brand in the process?

The later 250cc Clipper, or 'Clipper II' as it is sometimes known was introduced in 1958 and to all intents and purposes is just a Crusader with an iron head instead of alloy, a smaller carb and a single saddle. I've heard that when they were in prototype stage the iron heads had the same carb as the more expensive alloy Crusaders. In this form the Clippers actually ran better than their more expensive brothers, to counter this Royal Enfield made the carb smaller to give the bike a performance deliberately under the Crusader and to make the higher price of the Crusader justified.

Alongside the 250cc Clipper II their was a 350cc Clipper which was the same concept applied to the Bullet, ie a Bullet with an iron head and smaller carb.

Posted by Richard Miller at 9:40 PM No comments:

DKW from 1977. A range of generic two strokes plus the fairly out there Wankel rotary engined W2000.

Over the years I've been a regular visitor to the National Motor Museum at Beaulieu for events but it's very seldom that I've taken the time to take a look around the exhibits. After the Graham Walker Run left the Museum's grounds I had a spare hour so it seemed like a good plan to have a mooch around the motorcycle gallery.

It used to be that the bike exhibits at Beaulieu played a definite second fiddle to the four wheelers but the display nowadays is a lot better and there are some historic, unusual and rare machines to behold.

As always photography in museum surroundings can be difficult due to space and light but here are a selection of exhibits that willingly posed for the lens.

Posted by Richard Miller at 2:02 PM No comments:

More raiding of the photo album. This time a trip to Rimini for the Moto Giro. My good mate Matt and I squeezed four bikes in to a van for the journey down and stopped by at Dijon for Moto Legendes on the way down. My Anglo Indian Bullet hybrid was entered for an outing on the track. Unfortunately I rode it part of the way to Dijon and over exuberance buggered a new and tight piston before it even made it out on to the track. Instead Matt's trusty Crusader Sports got a few laps in. Very quick in his hands and with his slight weight on top of it, not so quick with myself aboard...

On to Rimini and the start of our first Giro. I had wanted to ride the event for a while: though totally geared up to Italian lightweights the rules said purely pre-57 and less than 175cc. I ran by the organisers in advance if a BSA Bantam would be OK, they gave it the thumbs up and I duly went out and found a cheap one. I stripped off all superfluous parts and transplanted a 175 D7 motor that I found at an autojumble. My first experience of long distance racing, it was a steep learning curve. By the end of the first day the flywheel mag was overheating badly and scraping against the casings, just taking the cover off gave it enough ventilation to cool sufficiently for clearance to be restored.

The Bantam required spannering every day of the event. Not a lot of fun to be tinkering a greasy bike in a hotel car park after a hard day's riding whilst other folks were making merry. The sense of camaraderie amongst fellow mechanical woe sufferers was great though and somehow it increased the sense of achievement. Day three and I had a flat tyre overnight. I was on a tight budget but really should have bought new tyres as the ones on the bike were so hardened I had to take them to a professional tyre fitters early the next morning. Towards the end of day four the crank went out of true and was grinding away against the cases in an alarming manner. Power was also down somewhat.. Fellow competitors urged a car park engine strip that night but I declined and felt that they were just after entertainment as they sipped their Peronis. I thought I would chance it for one more day.

Matt's ride was a lovely original Bianchi Mendola 175cc two stroke. A sweet and high quality bike, not fast but one a par with the Bantam and certainly more refined.

We were amongst the slower bikes on the Giro but the key to going quick aboard a tiddler is to not slow down. We followed that maxim, kept stops to a minimum and held pace with the time checks.

The little Bantam proved to be phenomenally resilient to abuse and against all the odds made it to the finish line. The first Bantam to ever ride, let alone finish a Moto Giro and I believe also the first British motorcycle to do so.

Matt's Bianchi also made it to the end, perhaps more comfortably and in a better state than the Bantam. The long distance racing bug had bitten. I developed the Bantam in the light of experience of the Moto G (fresh tyres for a start!) and returned the next year with a very different bike, but that is a another story.... 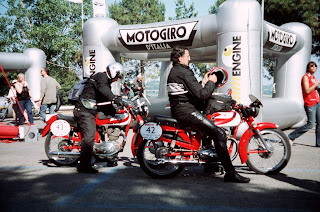 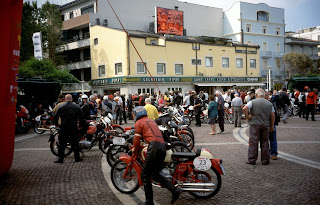 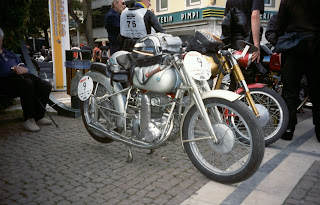 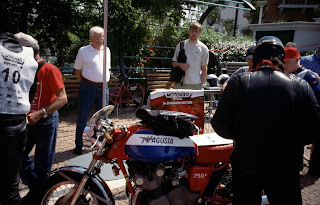 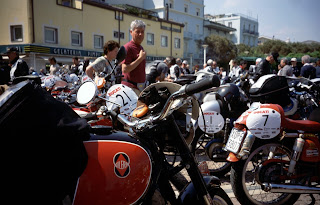 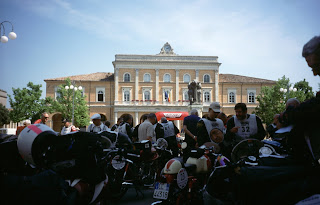 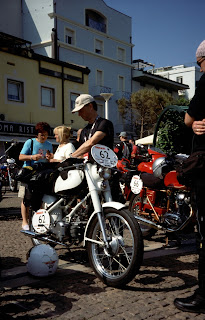 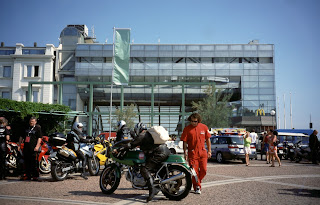 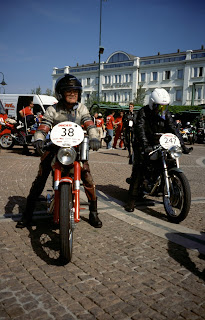 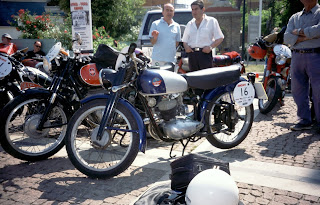