I've just recently had my entry confirmed for the Lundy Flyers beach sprint in North Devon at the beginning of December.

I've entered my 350 ZB Gold Star as it seems to fit the bill. Enough power to be fun but hopefully not enough to hurt myself, the weight on the bike is nice and low down too so that should be a benefit. It doesn't seem to be a hardcore race to win type event but I like to put in a good showing - it's going to be my first time sprinting on sand so any tips gratefully received...

Most importantly it looks like a fun weekend of camping on the beach, hanging out with like minded folks and riding bikes. 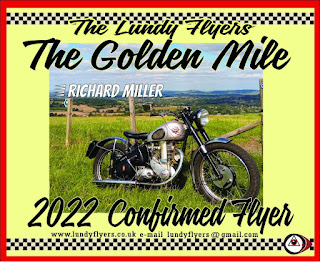 Certainly the most sophisticated European machine of the veteran era, the FN was a grand touring machine par excellence - see Ron Fellowes' ' Old Bloke on a Bike' site detailing his epic travels from India to Belgium on a 1910 FN. Sadly Ron has just recently passed away.

The particular machine pictured below I believe dates from 1913. The image is rather good and scanned in high resolution so if you want to see all the detail right click and open the image in a separate tab and then enlarge away to your heart's content...

Note the top tube mounted klaxon. There is an annotation on the back of the image stating ' April 1919'. 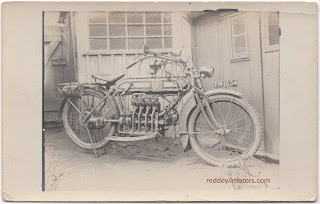 Here's a gorgeous Royal Enfield combination. It's a Model 180 v twin from 1926 or '27. A very impressive machine in either solo or sidecar form, lithe by the standards of many big twins of the time and with Enfield's excellent eight inch brakes front and rear. Really just about the perfect quintessential flat tank v twin and now highly sought after. Personally I'd love one...

What on earth is that over-inflated inner tube about though? 'The Charli Onion', is that what it says? The story behind it is surely lost in the mists of time.

Posted by Richard Miller at 5:33 AM 4 comments:

Here's the current bicycle project on the go. It's a Labor truss frame, the age is currently unknown. Labor made truss frame cycles from c1906 through until the late thirties. Judging from other examples out there I'm guessing this one is early twenties. If there are any Labor experts out there who can enlighten, the frame number is 100133.

The Labor came to me with a small job lot of cycles imported from France, I kept a couple and sold on a couple. I've wanted a Labor truss frame for a good while, apart from looking great they have a connection with a personal hero of mine, Major Taylor. Major Taylor rode in the States for Iver Johnson who pioneered the truss frame design, he came over to France and with him a fashion for truss frames began. At one point Major Taylor rode for Labor too.

As it came to me the Labor was heavily rusted and had been updated sometime in the thirties or forties to a 'porteur' style and then later abandoned in poor storage. The wheel rims were rotted through though they quite likely weren't correct anyway. The frame and forks were thankfully sound though and the cranks and seat pin were original.

The handlebars and stem that came with were likely not original and were fused into the forks. Unfortunately they had to be sacrificed in removing them. The paint is original and I've tried my best to preserve it. I wrapped the frame and forks in cloths sodden in 'evaporust' and then wrapped it all in clingfilm and left for 24 hours. Overally a pretty horrible and messy process but it worked. After de-rusting I've treated it with beeswax. Not a bad finish overall, I would have liked to have gotten a bit tougher on the remaining rust but was worried about losing paint.

The wheels (700B or 28 x 1 1/2 in British parlance) I had from another project and should suit nicely. The handlebars shown are temporary, they are appropriate but I'm getting used to them visually, drops would probably be more in keeping.

Hopefully before too long another post with the finished article pictured.