Generally this blog does not feature scans of magazine articles. This however is information that won't be seen anywhere else and is such an obscurity that it deserves publishing.

In the early post-WWII years rear springing conversions were a burgeoning business. The McCandless (from the same folks that brought you the Norton Featherbed frame) one was the best known and possibly the best designed and made. There were numerous others around, this being one. The conversion was made by Monty Lockwood of Ipswich and was billed as being half the price of a McCandless conversion. In all honesty so it should be as the McCandless job was a conversion to a full swinging arm and the Lockwood is a pair of plungers cut and shut on to the existing rear triangle.

Time was you would see quite a lot of restoration project bikes come up for sale with rear spring conversions. These bike were generally unloved and a lot cheaper than factory spec bikes. Most of them got restored back to factory spec. It is nowadays rare to see a machine with period aftermarket rear springing and they are beginning to be appreciated for what they are and retained when a bike is restored. Good job too as they are an interesting avenue of motorcycle history.

The below is copied from the Motor Cyclist's National News vol 1 number 2 March 1949.

Early to mid-twenties Sunbeam combination. The picture was taken in Bournemouth, UK, and for those nerdy enough to care the EL pre-fix on the reg plate is a Bournemouth designation. Check here for a listing of British number plate area codes.

The note on the back of the picture reads, "On bike Reg Bullen, pillion Wilf, sidecar Dena's grandfather."

These old pictures invite the mind to imagine the lives of others. Given the period it's more than likely that these guys were all First World War veterans. Reg Bullen is dressed slightly unusually and less formally than the norm for the period, he wears a roll-neck mariners jumper and a navy pea jacket with a carnation in the button hole. Perhaps he was a navy lad based out of Portsmouth or nearby Portland?

Posted by Richard Miller at 5:40 AM No comments:

There's been a slight shed re-alignment of late. My Wall Autowheel / Raleigh x-frame combo found a new home with fellow Sunbeam MCC member John Joseph. The Wall had an entry in the Pioneer Run but work dictated that I was unable to ride. I was genuinely chuffed that I was able to pass stewardship of the machine on to John in time for the run. John now has a pair of Autowheels and lent his new one to a friend who successfully piloted it all the way down to Brighton. That's four Pioneers completed in as many attempts, never fully without issue but not a bad record for a tiny atmospheric inlet motor that is over one hundred years old.

A wonderful facet of our hobby is the folks you get to meet. The vintage world is inhabited by a range of interesting and individualistic characters: you have after all got to be of a different cut to the norm to take pleasure in riding and fettling obsolete machinery. John is an artist and vintage enthusiast. It is well worth taking a look at his website for a sample of his work - http://jnjart.co.uk/

Posted by Richard Miller at 5:56 PM No comments:

Spring has well and truly sprung down in Southern England. Enjoying getting out on the Dominator, can't believe now I was considering selling it. Here's to a glorious riding season. 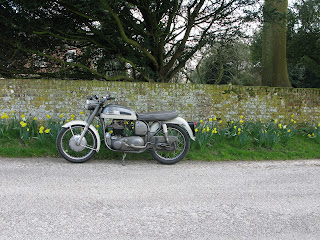 Posted by Richard Miller at 5:36 PM No comments:

Ambassador's brochure for their new Super S model for the 1959 season.

Posted by Richard Miller at 4:51 AM No comments:

A steep old hill for a veteran and no doubt, the postcard claims it is however a genuine image. I'd have a guess at the bike being a Rover c1914 fitted with an Armstrong hub gear. Here's the text from the card:

on rear:
This card is an actual photograph by G. P. Abraham, Ltd.
Keswick (Copyright)

postscript: I've heard from Pete of Occhio Lungo that he reckons the bike is a Premier. Rover was an educated guess on my part so I'm happy to go with a positive identification on Premier. Thanks for the contact Pete.
Posted by Richard Miller at 8:33 PM 2 comments:

The VMCC Shepton Mallet Autojumble is one of the best parts fairs going at the moment and has been for some time. Stalls are fairly priced so plenty of enthusiasts come along to have a clearout, that means interesting parts for sale and that brings the punters in. Combine that with the fact that you always know you are going to see plenty of folks you know to have a natter with it's a good day out, so good that you can forgive the drafty agricultural showground that it is held in. At least the halls don't stink any more of sheep turd like they used to. Here's a small mish-mash of gems that caught the eye from a few hours of wandering...

Posted by Richard Miller at 4:23 PM No comments:

Stepping closer to getting the CB32 fully roadworthy. Took it out for a road test, not the greatest ride - the bike needs bedding in and with the tall gearing and hilly local terrain it was pretty tiring. Good news is that everything seems to work ok. Bad news is that it started misfiring after about 10 miles. I thought it was dirt in the fuel and it would ride through but it got worse and worse until it cut out just before getting home. Cleaned the carb and checked sparks, all good but it just wouldn't start. After an hour or so I gave up and called for help. Of course on loading it out of the van at home when I gave it a test kick it sparked up straight away. Looks like the magneto is bad so off it will come for a rebuild....

Tis a small machine hiding under this intrepid pair, probably a Velocette GTP from the early thirties. Looks like they are off on a journey considering that knapsack she is carrying and his small suitcase. I would say that she's a keeper if she tolerated the discomfort of being perched on a pad on the tail of a small rigid framed two stroke machine carrying a heavy knapsack on a long journey...

A great pair of spats she is wearing as weather protection for the legs.

Posted by Richard Miller at 8:24 PM No comments:

Getting there with the ongoing (taking forever...) CB32 Gold Star project. I was having problems with compression but stripping down the top end and re-assembling seems to have cured it, though the cause remains a mystery.

I had been struggling to get my head around how to time the ignition and the breather together but a chat with Gary, the former owner, cleared it up for me. Obvious really but just time up the breather on the magneto pinion at top dead centre without tightening it on to the mag and then clock back the engine to 39 degrees btdc and set the ignition timing and then tighten up the pinion. Simple when you know but none of my manuals gave any enlightenment.

The petrol taps were rather leaky and I'm fed with drippy and stinky bikes so I followed a now tried and tested formula to leak proof the fuel system. I've found the key is BAP type taps as these seem to be the most leak free and resistant to ethanol (plus they have the bonus of being quite reasonably priced). The downside is that the BAP type taps are not quite period correct, better though than a fire risk in the shed. So: 1. BAP taps 2. Dowty sealing washers in correct BSP size 3. A liberal application of Loctite 565 on threads 4. Quality fuel line 4. Crimped on ferrules. Job done.

I bought the parts needed from local shop Feked. Highly recommended. They also had in stock a hard plastic fuel line snap connector in 1/4 bore size. As it seems likely that the Goldie tank will be on and off rather a lot I decided to try them out. Results are good.

Next up was quieting down the beast. Last it was run complaints from neighbours were elicited. Times change and excessively noisy vehicles are no longer so widely tolerated. Shame to lose the twitter on a Goldie but a baffle in the silencer makes for happier neighbours and more opportunity for trial runs and fettling. Again Feked came up trumps with the part, easy to fit and it does take the bite off the exhaust quite nicely. A Goldie track silencer is more of an amplifier. I did notice as well that the baffle has largely cured the megaphonitis the bike was suffering from and limited the blow back through the carb.


Final small job was to try and introduce some comfort to the whole plot. I picked up a set of riser clip ons at an autojumble a while back so decided to give them a go. Overall a small improvement but not as great as hoped for. The big win is that they have increased the steering lock considerably. It is easier to balance and start the bike. Downside though is that they are not much more comfortable....

Posted by Richard Miller at 8:19 PM No comments:

This gem has been sitting in a box in the shed for a long time. What possessed me to buy it in the first place I do not rightly know. It is unquestionably an item of great rarity; and with due cause many would say.

The astounding thing about this crash hat, for it is indeed that, is that it ever passed official safety standards for UK roads. OK, it was from a time when the wearing of helmets was not mandatory on British roads, but there was still a British Standard (BS!!) 'Kitemark' of quality for items that were sold as protective headgear.

What makes this 'helmet' yet more awesome, or scarey depending on your viewpoint is that it is still legal to wear to this day. Helmets have to meet the standards of the day, wearing a vintage helmet is perfectly legal, perhaps foolhardy, but none-the-less legal as long as it carries the Kitemark.

The genius of the Elkan Crook 'Hedtector' is in its one size fits all technology, that is to say that it is elasticated around the back of the head. The saving grace safety-wise is that it is unlikely that it would stay on your head above twenty five miles an hour given its lack of chin strap.

I cannot find any reference to Elkan Crook across the web other than they were based up in Gateshead near Newcastle and they dissolved as a company fairly recently. Before dissolving they were fabricating parts for the Ministry of Defense so it seems. Two parts are listed for them, a 'nuclear light' and a 'bushing sleeve'. Mysterious.


Postscript: Thanks to Matt who points out that the Hedtector may indeed be an industrial bump cap. If so I am hugely disappointed but in the interests of historical accuracy I must mention it...
Posted by Richard Miller at 7:47 PM 1 comment: