Google DMW motorcycles and the presumption is you've made a typo but wind back 50 or years and 'Smoky' Dawsons products were every bit as well known by the British motorcycling public as those from Bavaria. As with many of the smaller manufacturers the story of DMW is a fascinating tale of personalities and perseverance. The story is well told by on the Wolverhampton Local History and Heritage Website so there is little point repeating it here. Instead I'm going to concentrate on my 1955 DMW 225cc Cortina which has just been fettled to roadworthyness once more. 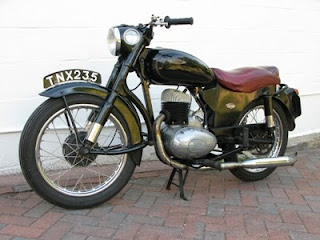 The bike came my way via a friend of a friend some 18 months ago as a nearly runner. To my shame it has taken me most of this time to get round to working on it and then several long and fruitless fettling sessions before discovering the root of the problem. The bike would start but get no further than managing to fire once in every 10 or so strokes. Enough to keep running but way off being rideable. The most likely fault mooted on sale was an engine seal 'gone'. My experience of old Brit strokers has been that they will be a bit 'iffy' starting with worn seals but they've got to be really shot to not run at all and sudden onset of the symptoms is very unlikely. Besides, I believe you should always start with the most simple solution and work through from there. This was very convenient as the very last thing I wanted to bother to do was strip the motor down completely....

The obvious was to check for sparks and fuel coming through. Sparks good, plug wet-ish. Still running badly. Strip carb. No change. Strip it again. Still no change. Give up and let it mature for another few weeks. Return to problem and repeat the process. Repeat again. By now I was getting quite tired of it. Then suddenly it stopped sparking. In a certain zen like way less was more. It gave me hope that a full strip was not the cure. I took the points apart, cleaned and reassembled. It sparked. It didn't run properly. I checked the plug. It didn't spark at all. I repeated the process, you get the picture... Following another few weeks maturation it occurs that the problem could be the coil, that might well give intermitment issues. The coil is a rather eccentrically moulded Villiers own brand item. I start to take it off and the connector on the cable going to the points broke. I crimp a new one on and all is hunky dory in Villiers land. Seems like the old one passed just enough current for the odd spark but cried foul when asked to work harder. 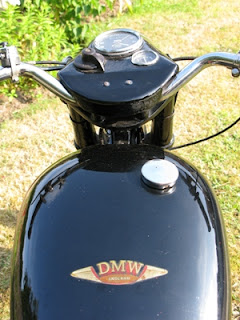 So, it's time to prep for MOT. All is sound, but the horn and brake light won't play ball. Of course I should at this point carefully look at the remainder of the wiring and fault find the whole lot. Instead as I have functioning lights I decide that the best course of action is to pretend it has none, tape some newspaper over them, stick on a squeaky bicycle horn and put it through a daylight MOT. Which it passes with flying colours!
This Cortina has the optional 'Earles' forks. They are beautifully curvy and nicely made though when trying to pogo them up and down stationary to test they have a remarkable complete lack of rebound damping and top out with a metallic clunk. As they seem otherwise fine I assume this is by design and find out that on the road this is of no issue, the design means they don't top out just as they don't dive under braking. An unusual sensation at first but it causes no worries. And the brakes, the brakes are rather nice. They are efficient and of way better quality than the average Villiers engined bike of the era, down to the cute pre-war sports style underslung air scoop on the front brake. In fact the whole bike is a cut above the average of the time, as it should be really as it was a fair bit more costly than most. It is the only Villiers bike I've seen of the era that even has a proper grown up Smith chronometric speedo instead of the dinky d type ones as fitted on Bantams. 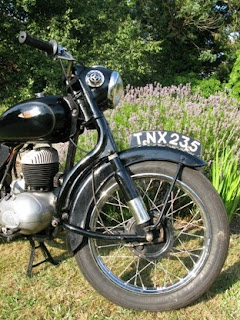 The frame is an unusual feature. Not really a true monocoque but square section front triangle and sheet centre section. The seat folds up from the rear to reveal battery and toolbox and the rear shocker mounts are incorporated into the sheet. There has been some remedial welding work around the upper suspension mounts and I assume this is par for the course as it certainly looks like a weak point. The same frame was used on racing and scrambling models and without being unfair one can only assume that lifespan was short and it was rather woeful for the task in hand! On the road though it is all quite pleasant.

The Villiers 1H 225cc hums away in a solid and unhurried manner. I did try to hurry but it's not really interested. Settle down to a 45mph cruise and this is a very nice bike. Hopefully it'll see some action over the next few weeks and then perhaps on to a new home. Somehow a number of new machines have crept in to the garage of late and great as they all are sometimes one just needs to take a step back...
Posted by Richard Miller at 2:47 PM 2 comments:

Email ThisBlogThis!Share to TwitterShare to FacebookShare to Pinterest
Labels: dmw

What is Red Devil Motors?

Red Devil Motors has become the cover name for my two wheeled activities. Since being able to walk I've been fascinated (read mildly obsessed) with all things two wheeled. Mostly motorcycles and mostly vintage but bicycles too and in all reality I am not discerning. I'm as into a fifties Raleigh Roadster as a seventies Mobylette as a veteran Zenith.

Sometime in my twenties I started buying and selling vintage motorcycles and spares and getting parts made. Many of the bikes were imported from India, until recently prices there were a lot lower than the UK and many shops were a treasure trove for new old stock gems. Three or four years back the business became more serious and a name and logo was needed. I did a nice line in reproduction cock-a-snoot vintage motorcycle mascots. From that the name Red Devil Motors was born and a graphics designer friend in Brighton drew up the logo (thanks Stu I still love it!).

The business didn't quite make wage enough to survive but the logo was great and the name stayed on. Perhaps one day it will be resurrected as a 'money maker' but for now it's a pseudonym for my two wheeled ramblings.

Posted by Richard Miller at 12:53 PM No comments: