Brochure for the ultimate (as in final) Bantam, the B175. Last of a long line and thought of by many as the best of the bunch. A very basic bike compared to contemporaries from the Far East but none-the-less a willing, reliable and charming bike. The beach and bikini scene on the cover is a far cry from the Bantam experience of most owners but as a first bike maybe folks look back and agree that the best days were indeed Bantam days 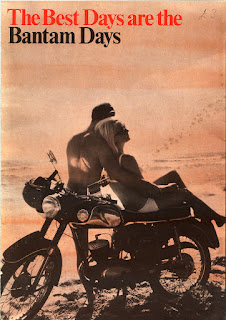 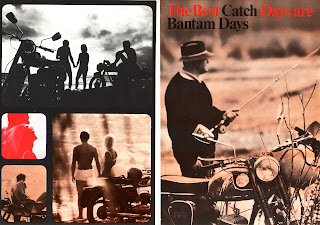 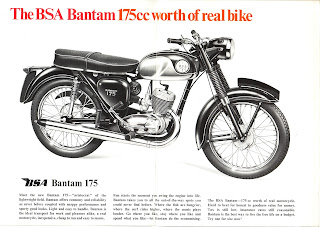 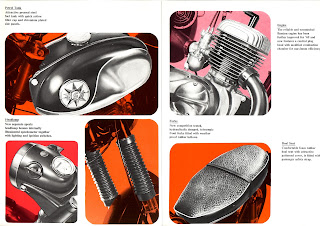 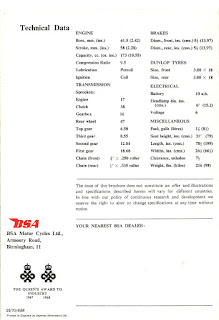 Tired of fettling an old Royal Enfield Bullet before and after every off-road excursion I parted with it and decided to go Japanese. This was going to be a bike to get on and use that required a minimum of maintenance. So, perhaps unwisely, I saw a 35 year old farm bike for sale and somehow thought that it would be a good option.

I put in an offer, it was accepted. The bike arrived, I liked it.

There was a small wiring job to do that I was warned about. Turned out it was small in scope but massive in consumption of workshop time. Then after getting an MOT on the machine I found that it would only run sweetly with the choke full on.

An initial examination showed a perished and cracked inlet rubber as the likely culprit. This was duly replaced (not expensive but it had to be sent over from China). Job not done. One problem was solved but it still ran like a pig. The beauty of a British bike is that they were designed with maintenance in mind, the manufacturers were wise to the fact that they were making machines that required regular fettling: that means that there is plenty of space and everything comes apart fairly easily. Not so on the AG200. The carb is an absolute pig to remove.

After twenty or so times removing the carb and replacing it you would think that I might have worked out an easy way to do it, not so. I believe an easy way does not exist. Each time it came off I made a small tweak to the settings, the first obvious problem was a missing pilot screw. It was a frustrating process and not helped much by the Yamaha workshop manual which really only tells you that the carb is a carefully set up precision instrument and there is no reason to mess with it. Too late, someone else already had.

AG200 spares are not so easy to find in the UK but I did some investigation and discovered that most mechanical parts are shared with the TW200 and BW200, both slightly more common over here.

With no guidance on settings in the workshop manual I turned to a TW200 forum and found out that a suitable main jet size is a 120. My bike was fitted with a 102.5. In the only stroke of luck in the whole project I happened to have a good stock of different sizes for the Mikarb - an Indian Mikuni copy that was used on 350 and 500 Bullets. I popped a 120 in and finally sweet running was the result.

A couple of days later I hit the local green lanes. The AG200 is an ideal mount for the job, nice and quiet, fairly gently in power and very comfortable. On the road it will hum along at 55mph or so. It should be ideal for my intended use for it - long distance trials. I had forgotten what a hoot green laning is, note to self to do it more often.

Posted by Richard Miller at 5:24 AM No comments:

Swedish flyer for the Zenith 500cc 'Club' model. I can't find reference to this model anywhere, it might just be a special for the Swedish market. The cross brace on the rear triangle of the frame is very unusual and it could be that the frame is from the dirt track / speedway model. Either way, it is a cracking looking bike, maybe there is someone out there can throw more light on to it? 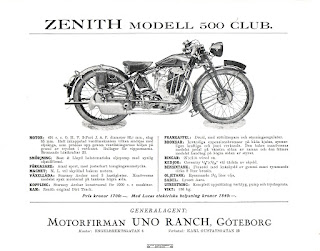 Posted by Richard Miller at 5:32 AM 2 comments:

There's a two stroke Cleveland sitting in my garage that's somewhere in the queue for attention. Progress on restoring the bike has been null but in the meantime I've been slowly accumulating pictures, manuals and articles. There are a surprising number of Cleveland survivors out there but not much information to be had on them so hopefully this post will be useful to fellow owners.

Some of the images are scanned from magazines, both from the period and more recent, and the photos are lifted from the web. If I've missed out any attributions, apologies and I'm more than happy to add. 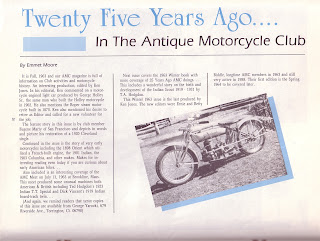 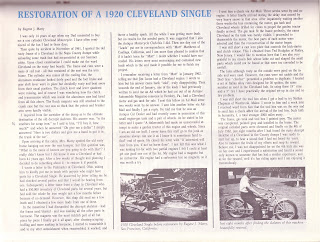 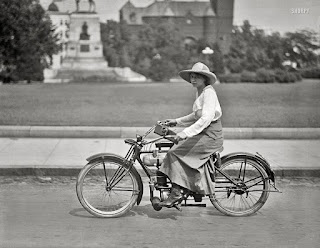 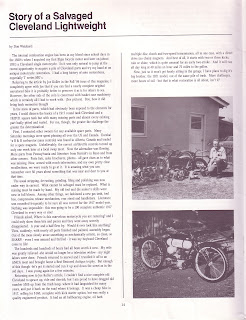 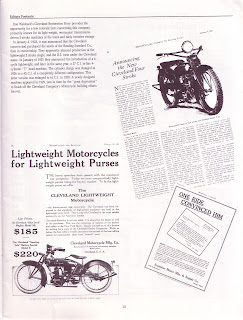 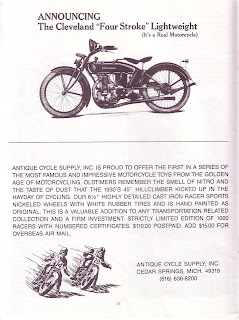 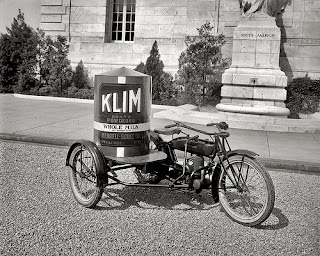 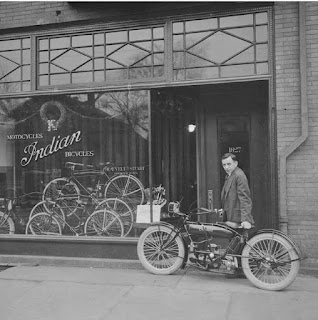 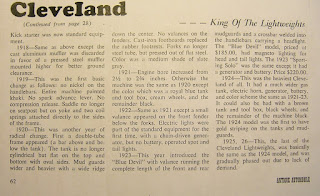 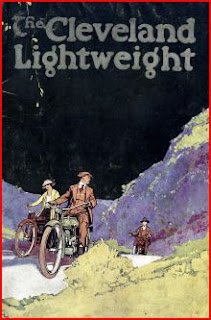 Posted by Richard Miller at 3:56 PM No comments:

Last Sunday was the VMCC Stonehenge Section's Autumn Nifty Run for sub 250cc machines. Now a regular fixture in the calendar the Run is a chance to get out on smaller less powerful bikes often left behind on regular runs for a spin around the New Forest. A bit of a lower turnout than previous years, there's a lot of other events going on the same day, but the weather was kind. Several of the machines on the run are the once common ride to work machines of the fifties and sixties that you seldom see on the road nowadays, it was great to see them out and about getting some exercise.


Posted by Richard Miller at 1:54 PM No comments:

I've got a bit of a soft spot for Douglas motorcycles, particularly the post war machines. Maybe it is because they were the West Country's biggest bike company or maybe because they so resolutely plowed their own furrow. The company's swansong was the Dragonfly which continued Douglas' proud tradition of practical, if sometimes eccentric engineering and styling.


Posted by Richard Miller at 1:53 PM No comments:

Sweet posed wartime photo with a Triumph in the background. Looks like the model is a Tiger 80 350cc single from the late thirties. Note the wartime black-out headlight mask.

The final post on the Moto Piston International rally in Santander. The weather was looking ominous first thing for Sunday's ride but in the end the rain held off and the event for the day was a shortish jaunt out to a Moto Cafe for a big paella lunch followed by a visit to the impressive Moto Piston club house.

This was the day to give my '27 Triumph some exercise. We set off late and then made it about half a mile along the Sardinero sea front road before I came to a halt with some terrible binding noises coming from the Triumph's front wheel. Returning to the hotel initially seemed like an option but then spinning the wheel on the stand it locked up all together so there was no choice but to take it apart. Big thanks to Matt for hanging around and helping out with the job. The Triumph has an expanding band front brake and turns out the band is held in place by two bolts, one had fallen off and was rattling around getting caught up inside the drum. It looked like one bolt should still do the job well enough so with the stray bolt cleared out of the way and the whole lot back together on we went.

The woes weren't totally over for the Triumph as two cables went on to break, luckily though it was the air and decompressor so not show stoppers. Other than that the Triumph went well and hussled through the bends as well as much later bikes. In fact overall, despite the 40mph cruising speed, we kept up with everyone pretty well.

So, it's all over for another year. Had a fantastic time and here's to hoping I can make the next one... If you enjoy properly using your old bike and getting plenty of quality miles in this is definitely your kind of event. Do yourself a favour and enter next year.

Final thing to say is another big thank you to the organisers. Excellent rally. 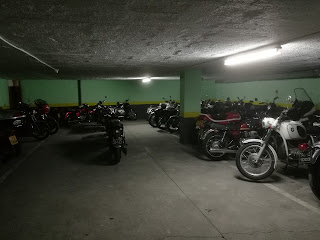 Posted by Richard Miller at 9:16 PM No comments:

The third day of riding for Matt and I. Got to confess that last time I did the rally it was sunny all the time so I hadn't really entertained the thought that it might be rainy. Pretty daft really what with the Atlantic Ocean, mountains and it all being so lush and green....

A bit achy from the 5000 Curves, both in body from the ride and mind from the post-ride celebrations, so got up late. It was rainy. Waited a while for it to clear up. It did, a bit. I wheeled James' little 175 Gilera out from the Santemar Hotel's underground garage and off we set. The rain returned and then returned some more. Another mistake was not to change the Gilera's rear tyre before leaving home: it is of uncertain vintage but definitely more than fifteen years old and of Chinese origin. After the bike stepped out a couple of times I began to lose my nerve with it. That combined with the rain and the extreme riding position of the Gilera causing lower back pain right around where I slipped a disc nine months back I ended up wimping out after about ten miles and sitting in a cafe supping coffee watching folks ride by before trundling back to Santander. 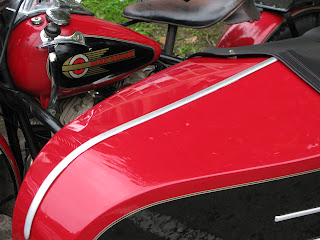 Posted by Richard Miller at 8:07 PM No comments: