The days of the Coupes Moto Legendes event at Montlhery hold happy memories. Manic frenchmen hyped up on the atmosphere and red wine hooning their vintage machinery around, campfires harvested from the circuit's woodland and of course the sight and sound of hundreds of bikes circulating the banked track. Sadly though those days are long gone and it's been around a decade since the event moved to the more sanitised surroundings of Dijon-Prennois.

So when we got wind of the Vintage Revival event attendance seemed very necessary. A joint car and bike bash, the promotional literature made clear that it would be a different kettle of fish from Moto Legendes but it still held great promise. The very un-french prohibition on picnics, booze and camping appeared to be a stipulation by the circuit's owners wary of memories of alcohol fuelled lunacy, pillage of their woodland and the frenchman's perception that any mildly secluded bit of nature is fair game as a toilet (though given past time's facilities at Montlhery any option was preferable to the official one). As it turned out, though it would have been good to camp on site, the lack of picnics and alcohol didn't put any damper on affairs.

Our gang of four met up at Portsmouth Ferry Terminal for the crossing to Le Havre. Dan on his tweaked 625cc Bullet, Matt on his Velo, Rob astride a Ural and myself with Norton Dominator. We were in good company with, amongst many others, several brace of Morgan trikes, an Edwardian aero-engined four-wheeled special and a large group of Frazer Nash BMWs on their way down to Sicily.


Normandy is my usual entry point into France so I was sceptical that we would find a scenic route down to Montlhery from Le Havre but it turned out to be a corker, following the Seine down for a good few miles, cutting across around Paris and then traversing the forests to the capital's South. Rob's Ural dictated a cruising speed of around 50mph, an ideal speed to enjoy the countryside. The '68 Ural had been the subject of considerable scoffing until we saw it in action and despite leaving a light smoky trail in its wake its performance was a pleasant surprise to all until it started to tighten up with about 50 miles to go. We stopped to find a motor that was volcanically hot. One side was considerably hotter than the other. Dan, also Ural afflicted, suggested it was running too weak on one side. Raising the carb needle didn't really seem to improve things. We all sat down and had a picnic waiting for the bike to cool down. In grief at his bike's woeful showing Rob slashed his hand with a knife whilst pretending to cut a baguette.

﻿﻿﻿﻿﻿﻿On returning to the Ural we made the startling discovery that without oil an engine will seize. Rob's performance modification of an extra large sump giving nearly one more litre of oil had apparently increased the bike's non-seize range by some 20 or so miles. However in testament to the slack tolerances of Soviet engineering the Ural was filled up with fresh oil and ran fine. At the end of the day this performance won Rob the innaugural presentation of the 'Pink Spanner Award for Least Meritous Performance of the Day'. A new and self-explanatory addition to our two wheeled touring adventures.

With a new, lower, more sick Ural friendly, cruising speed we arrived at the munipal campsite at Dourdan in good time to put up tents and wander in to town for a meal.
﻿


﻿﻿Day broke and action in the camp was slow. Sausages were cooked, camp stoves misbehaved and Matt took ages in the shower block with his daily beauty regime. Engines were kicked into life and off we went. The Dourdan camp site is the closest municipal one to the circuit but still about half an hour away. We had expected other vintage enthusiasts to be staying there but more than likely they had found accommodation of greater luxury. Halfway there the solitary bungee attaching Matt's circuit clothing to the Velo's carrier gave way and ejected a shower of shoes and cut off jeans across the highway. A strong contender for the Pink Spanner had been identified!

﻿﻿﻿﻿﻿﻿ It's always a great feeling arriving at Montlhery. From the outside you can't make out much of what is within. You show your ticket, ride through the tunnel under the banking revving with bravado to hear the note reverberate and then emerge the other side to enter a vintage petrol head's wonderland.

﻿﻿﻿﻿﻿﻿And the machinery on show was indeed wonderful. The event was certainly more car orientated than bike and not huge in size but it was all about quality over quantity. There was a strong UK contingent from the Vintage Sports Car Club and the Brooklands museum had brought along a selection of motorcycles and the awesome Napier Railton. Sadly the Railton didn't seem to get above a tickover out on the circuit and it was a pity to see the Wickstead blown Triumph replica misbehave in the holding area, overheat and tighten up. Generally though machines were being driven with some verve out on the track and it was great to see so many Bugattis and other exotica being thrashed.
Part two to follow......

Posted by Richard Miller at 11:48 PM No comments:

A sunny day on a May Bank Holiday is always a fine reason to ride over to Sammy's autojumble. I'm not alone in the sentiment as there's always a great line up of old bikes in the car park. The jumble is organised on the fine principle of being free for vendors, pay a deposit, turn up and you get it back, don't turn up and lose it.


There's a healthy number of stalls and one or two interesting bits and pieces on sale but for me the pleasure is in riding over, scuffing around stalls and having a natter with aquaintances old and new. A couple of machines for sale caught the eye, a lovely original trials D1 BSA Bantam for a very reasonable £860 and on Sammy's stall an unusual Parilla Slughi. The little Parilla was missing its side panels though was otherwise complete and would make someone an interesting if probably disproportinately expensive project. The lines of the bike are late fifties futuristic and fairly easy on the eye though it is hard to see how they sold any in the UK market back in the day. I guess the answer is that they didn't shift many making it the rare oddity it is today. Parillas seem to attract a strong following though this is certainly down to their beautiful high cam singles rather than the Dan Dare strange Slughi.﻿﻿

For those enthused by the Slughi picture (!!) here're some useful Parilla links:

As an interesting compare and contrast in the car park was a lovingly restored Francis Barnett Fulmar. Seems like the boys at FB had a look at the Slughi and wanted in on the action.
﻿ ﻿


Other assorted lovelies parked up were a pair of used and parrently unrestored Norton Internationals, a Featherbed as above and a Garden Gate as below. On the theme of unrestored and original a Honda CB72 rolled in later in very authentic condition. Nice to see as early Japanese bikes seem to, all too often, get given the catalogue perfect shinier than thou going over. 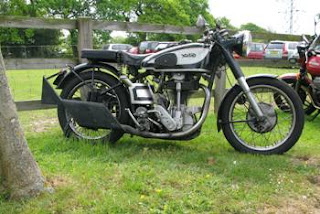 Posted by Richard Miller at 10:19 AM No comments: