Round the World Royal Enfields back in 1972

It's not often you'll find a post on this site giving no more than a link but I've got to share this one.

Subhash Sharma has written the story of his round the world trip with three buddies and two Royal Enfield Bullets back in 1972. It's a great, warm hearted story of adventure and is well worth reading.

Posted by Richard Miller at 6:42 AM No comments:

A bit of a mystery this photo - on the reverse is written, 'arrived May 1924 japan'. The registration number is certainly British and not Japanese though and the backdrop, hard to say, it looks fairly British but then again it's just a fence and gate and could easily be Japanese....

The bike itself is evidently a Raleigh, it looks rather like a 2 3/4hp model (350cc) from c1924. A charming and high quality bike that one seldom sees original photos of. Note the klaxon above the petrol tank.

Posted by Richard Miller at 4:54 AM No comments:

I spotted this sweet looking hybrid on a recent trip down to West Bay in West Dorset. West Bay is a local riding destination being a cute fishing village with a couple of good cafes at the end of several fun roads. Bike or no bike it's just a good place to visit.

The petrol tank logo states 'Harumph' which is as good a homebrew bike name as you will ever find and reason enough in itself to pop a Harley engine into a Triumph frame. Let's forget that neither were Triumph's fifties frames noted for their fine handling, nor Harley WL flatheads for their great performance. This machine is the anti-Triton! These things matter not these days for what is created is a great looking bike that would undoubtedly be a lot of fun to ride.

Posted by Richard Miller at 5:09 AM No comments:

A couple of snaps from a forgotten family album of a 1950 Panther Model 65 De Luxe. Though best known for their big long stroke singles Panther for many years produced a lightweight range too. Post war they had a range of 250 and 350 pre unit singles. Though favourably priced when new they were never great sellers compared to their competition. In the early years of classic biking the lightweight Panthers were derided as 'grey porridge' but are now more cherished as charming and rare machines with possibly more than a little of their big brothers' desirability rubbed off onto them.

Posted by Richard Miller at 5:33 AM No comments:

I was digging through some old pictures recently and came across these two. From memory it was back in 1999 when the Moto Legendes event was still being held at the Montlhery Autodrome near Paris, before it moved to Dijon Prennois.

My father and I rode down from Cherbourg, stayed at the circuit for a couple of days and then rode home again, all in glorious weather. I was riding my '58 350cc Bullet that I had ridden back home from India a year or so previously and my father his '56 Velocette Venom. We both still have both bikes, the Venom is on the road, though, to my shame, the Bullet has been garage bound for quite a few years. I rebuilt the motor after a big end fail but got the crank alignment slightly out and it vibrated slightly too much. I lost heart with it and tucked it away and forgot about it for too long. Hopefully it's going to be resurrected soon.

Posted by Richard Miller at 5:54 AM No comments:

The bike looks to be circa 1923 just when Rudge were moving away from their famous 'Multi' models with variable belt drive to conventional gearboxes. The bike appears to have a drum front brake but in fact it had dummy rim brakes front and rear. The front hub 'brake' is actually just a large flange on the hub and could be used to semi enclose the speedo drive when this was fitted as an option.

Ivy Duke and Guy Newall appeared together in several films and were married for seven years. Both were most prolific in the silent film era.

Posted by Richard Miller at 4:23 AM No comments: 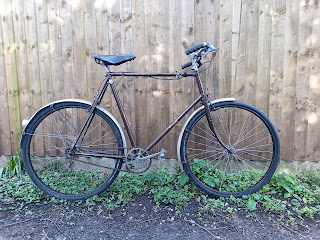 Another minor victory in finishing off projects. This 1930s F.W. Evans was one of those late night 'damn I didn't expect to win that' eBay purchases. The temptation was that it was very cheap, the right frame size and it came with a nice Chater Lea headset - worth the price of the whole frame alone.

When I first got the Evans I was just going to rob it of the headset for another project and then pass it on but in a weak moment I realised that I had loads of suitable parts lying around and that I should build it up as a vintage bike to ride.

Evans were the first British builder of specialist touring cycles and their pre-war cycles are of satisfyingly high quality with a number of unique features and be-fitting their touring function are designed for longevity. Evans himself passed away in 1944 and his business was sold on, it grew to become one of the largest chains of bicycle stores in the UK but was recently in financial difficulty and absorbed by the Sports Direct group. Happily though Evans have retained their identity and continue on. For more on the history of Evans take a look at the Classic Lightweights site.

I'm not totally sure of the year of this particular example, the frame number is 4430 (could it be the fourty fourth bike built in 1930? - it is very unlikely that >4000 Evans were built by the end of the thirties).

Initially I had considered selling the Evans once complete but now built up it is a very pleasant bike to ride and has become the weapon of choice for gentle pottering.

Posted by Richard Miller at 3:29 AM No comments:

This photo is very dear to me as it is of my paternal Grandfather. I can recall tales of this bike from when I was very young, the most memorable of which was him getting stopped by a Policeman on account of the bike being too noisy. The Officer questioned the silencing on the New Gerrard and tested it by poking a stick up the exhaust - when the stick met no resistance proving the lack of silencing my Grandfather got reprimanded!

The New Gerrard was a rare bike back in the day as it is now and essentially a racer on the road. The engine is a Blackburne and I believe would have been a 350.

New Gerrards were made in Scotland by Jock Porter - the first Scottish TT winner in 1923 on one of his own built machines.

Jock Porter was by all accounts quite the character and built of stern stuff. He was partially deaf but none-the-less travelled solo from Edinburgh to compete in GP races across Europe - imagine that in pre-motorway, pre-passenger flight days. Even today most Brits consider a road trip to Monza a big undetaking. Picture going there all the way from Edinburgh in the mid-twenties. There's a good biog of Jock Porter here.

New Gerrard motorcycles were built from 1922 to 1940. There was also a line of New Gerrard bicycles.

Posted by Richard Miller at 7:26 AM 2 comments:

A magnificent motorcycle from one of the pioneer manufacturers. It's a BAT v-twin from approx 1920.

BATs had several distinctive features, amongst which is the leading link fork and round petrol tank held on with nickeled straps (a design also used by NUT and Martynside).

There seems to be confusion as to whether the correct name is 'Bat' or 'BAT'. The company was founded in 1901 by a gentleman by the name of  Samuel Batson. The first model was introduced in 1902 and following its success (in competition rather than sales) the slogan 'Best After Test' was adopted in 1903. Early adverts feature cricket bats and the flying rodents of same name. The petrol tank transfers gave the name as 'Bat' but in advertising the company name was capitalised.

BAT were never a volume manufacturer and eventually folded in 1926.

Posted by Richard Miller at 5:18 AM No comments:

'When tired of Cycling, try Spooning!'

As you may have guessed 'spooning' had a different and more innocent meaning back in the veteran era when it referred to flirtatious behaviour. All the same this probably would have been considered a risqué postcard back in the day. Apparently the phrase spooning has its roots in seventeenth century Wales where a young man would present an intricately carved wooden love spoon to the object of his affections. The spoon signalled his intent to both his amor and her family that he was a skilled man able to provide.

Of course of equal, or perhaps more, interest to us moto nerds is the bike. It's a very unusual v-twin Premier from roughly 1909. There's one in the Yesterday's archive of sold machines to compare:
https://www.yesterdays.nl/product/premier-1909-model-2-600cc-2-cyl-sv/