A few evocative shots of a vintage BSA combo. I believe it is a S29-18 from 1929 though am happy for any experts out there to correct me!
BSA Models numbers of the late vintage / early post vintage era are slightly confusing as they are alpha numeric and the same model number prefix applies to multiple different models - ie S29 designates that it is a 500cc model from 1929 (in 1930 it was the S30). Bikes usually get identified with the prefix only but it is the suffix that gives the true id. So, for example an S29 could be any bike in the 1929 range that was 500cc, the '-18' suffix means that it was the upright-engined side-valve model (also known at the 4.93hp Light).
For more details on 1930s Beesas take a look at this site: https://www.bsa1930s.nl/ 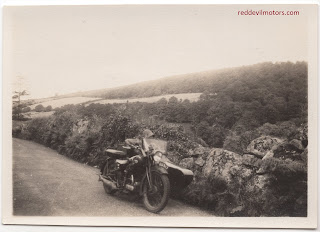 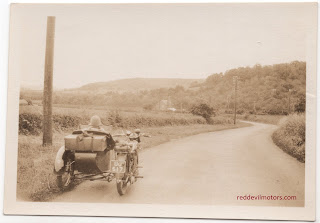 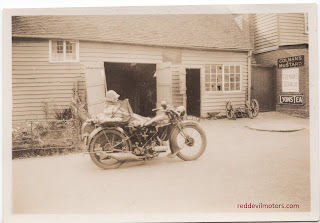 Posted by Richard Miller at 1:29 PM No comments:

Wow! Never even knew of the existence of this one until I scored this brochure. One can only guess that the lads at Sprite had seen the Fantic Chopper and thought, 'we can do that too'. As far as I can work out it's just the motocross model modded with a banana seat, ape hanger bars and an elevated headlight, wild! The motor was the buzz saw-like Sachs 125cc two stroke.

Definitely a machine of its time. I wonder how many, if any, were made and if there is a survivor out there?

Posted by Richard Miller at 9:53 PM No comments:

It's a 'trusty' Triumph Model H, favourite of First World War despatch riders and as dependable a machine as there was in the era. Note the leather belt wrapped around the fork, an essential accessory for the Triumph rider of the period as with the Triumph swinging fork design a broken spring could wreak disastrous results.

The time has come to part with an old friend. Not sure it is the right move, I've owned BMW airheads for the last twenty years or so and every time I sell one I just buy another, and this one is a good one...

Anyway, too many bikes, not enough space or money and the urge for a change drive me to offer the old faithful Bimmer for sale after 9 years of adventures.

All details are on the fleabay listing except for the emptiness I will feel when it has gone!! There's even a very poor quality walk around video. 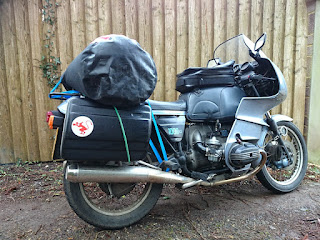 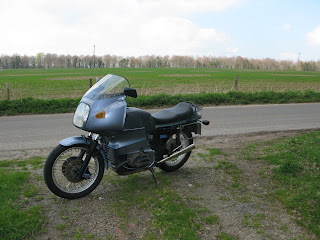 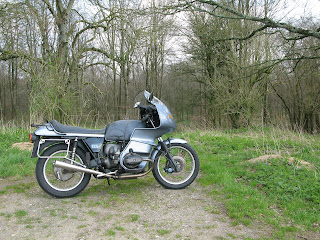 Posted by Richard Miller at 8:43 PM No comments:

Email ThisBlogThis!Share to TwitterShare to FacebookShare to Pinterest
Labels: bmw, for sale

After a year's hiatus it was hard to know what to expect from this year's Beaulieu. What with Corona Virus and Brexit it was hardly going to be the international affair that it has always been up until now. Scaled back with one entire field less (something like a third down on stall numbers) the good news was that the atmosphere was still there. There were still wonderful things to see and possibly buy, great people watching to be had and the vibe that comes with a large gathering of enthusiasts.
There were a few European visitors, not many at all, but none that I saw were selling. After all who really could be bothered to go through the paperwork currently necessary and the risk of a big tax bill? A small number of hardcore were there but only buying small items, nothing that was obviously of great value and would have to be declared on return home...
Personally I didn't find so much to buy this year, but that is not a bad thing; I bought a couple of trinkets and sold a lot more than I bought. So, I left with a net outward flow of junk and money in pocket. At the moment with my crowded garage space that's a great result.
Following below a small selection of nice things that caught my eye. Here's to hoping that next year the event will be back to full strength.

Posted by Richard Miller at 9:57 PM No comments:

Not a great photo but hey, it's an Excelsior Manxman! One of the all time classic British singles.

Posted by Richard Miller at 11:22 AM No comments: