A new toy. Yes, the saving up to buy a pioneer motorcycle fund is not going so well. However a redistribution of motorcycles within the shed is being plotted so perhaps I will be riding a veteran in events next season.... In the meantime here is a machine I have lusted after for a good long while. I decided to make the jump as Buells seem to be going up in value at the moment, that's not because I've bought it as an 'inv***ment' rather that there is no way I could be persuaded to part with hard earned cash if they cost much more than they do now....

Firstly I will say that I haven't had many opportunities yet to ride this fine machine but I already love it. It delivers absolute, raw motorcycling thrills. Think about it, there are not many traditional in line v twin pushrod engined sports motorcycles out there. What else, Moto Morinis? or hush... Vincents.

The feel of the Buell is in fact very much like a development of a British classic. That is to say, it vibrates a lot, has very pronounced character and delivers power with definite pulses. And it does have quite a lot of power, some 95 horses of them, not massive by sportsbike standards but they are of the shire horse variety. Most importantly it is a wildly fun machine to ride and can deliver a lot of thrills at speeds that don't risk an instant ban on the license.

Like any limited production machine developed on a low budget the Cyclone has quirks. Firstly the engine is solid. It's a Harley Sportster so is, you can say, very well proven. Of course it is pushing out considerably more power than a standard Sportster but it is still fairly Bullet proof. The frame is simple and good. Buells are known to be good handlers, to give this one the benefit of the doubt I would say that it needs new tyres. It is a short, high bike with a sharp steering angle so the handling is not immediately familiar but undoubtedly it can hustle through the bends. The trademark Buell suspension unit under the engine does really seem like obstinate engineering for the sake of it: it raises the, already heavy, engine slightly too high up when a set of twin shocks would have done the job equally well and kept mass low down.

Some of the fittings are of lovely quality and some are frankly awful. The front brake is excellent. Apparently Eric Buell is not a believer in using a rear brake and subsequently the rear is pretty feeble.

The gear change lever is an absolute abomination of pressed steel. Admittedly the design is led by the location of the Sportster gear shaft but surely cast alloy and rose joints should have been considered. On the subject of gripes, what were they ever thinking of putting the ignition key between the cylinder heads where it slowly cooks for that Sportster motor does indeed run pretty hot.

Buells tend to come with a very definite image. Maybe it is because they have a Harley motor and were sold through Harley dealers. As a consequence you do see a number of them around with dodgy flame paint schemes. That is why I like this example, it is black - the colour a motorcycle should be. There is not a lot of baggage that comes with a plain black motorcycle. It has a certain menace and danger as a motorcycle should but it is not aligning with any particular tribe.

Overall I feel like I shall be boring friends and acquaintances extolling the virtues of Buell motorcycles for a while to come. I'm looking forward to putting some decent miles in on the bike and already thinking about how I can get it to haul some luggage for long trips abroad. More to come...

Posted by Richard Miller at 9:42 PM No comments:

Email ThisBlogThis!Share to TwitterShare to FacebookShare to Pinterest
Labels: buell

I had been looking for a decent wheel truing jig for a while when this one turned up in the autojumble area of the Dorset Steam Fair. You see a few for sale but they are heavy old things and no-one really wants to post them. I had to carry this one from one side of the rally field to another and that ten minute hike seemed quite gruelling..

I'm a sucker for vintage tools and workshop equipment, more so if they are in cast iron and the Millenium is a doozy. All the fittings are there and the patina is nice, better still is that it is actually a solid decent and useful tool. I've got a couple of wheels to build up and true and with any luck this Brown Brothers product will serve me well. The cherry on top is the cardboard tag with a little bit of the personal history of the jig noted in ink in fine handwriting and dating from 1958. At a best guess the jig dates from the twenties. 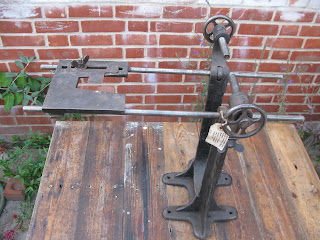 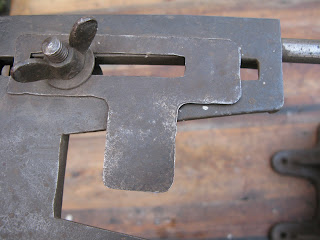 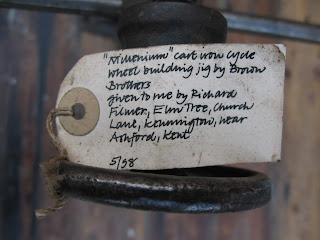 The BMW motorcycle range brochure for 1964. Despite being 54 years old this brochure still looks fresh to modern eyes, the font used is clean and modern looking and the graphic style with simple colour panels helps too.

Yes, it is a fairly rotten photo but it is of a chap riding a Sunbeam S7 across a muddy field...

Posted by Richard Miller at 5:05 PM No comments:


Posted by Richard Miller at 5:46 PM No comments:

Some photos for posterity of a rather nice Raleigh x frame ladies machine that came my way recently. I bought it at auction in a moment of weakness before the dawning hit me that I really don't have the need for another Ladies bicycle, so it was passed on to a well known cycle dealer fairly quickly and has now no doubt been mildly renovated and probably is with a new keeper too...

All the same I thought I would put some pictures up as it is such a lovely original and un-molested thing. Ladies cross frame Raleighs are significantly rarer than the gents ones and this one doubly so as it is the 'Superbe' Model produced for a very short period. The Superbe model is identifiable by the Lea Francis type handlebars with concealed rollers.

Posted by Richard Miller at 4:46 PM No comments:

Pictures from the start of the Motorcycle Cannonball at Portland, Maine yesterday courtesy of my good buddy James aka Moto Patois over in Boston, Mass. Many thanks James, wish I could have been there, perhaps the next one.... 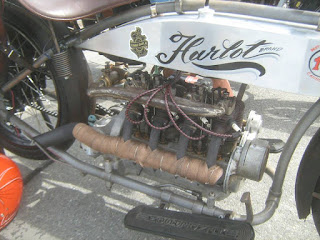 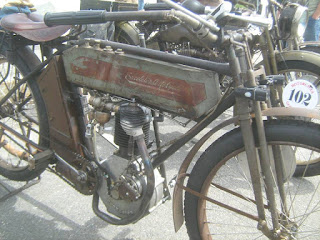 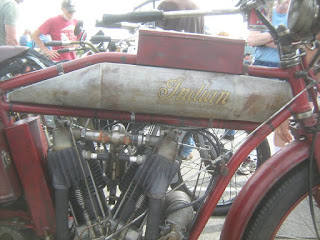 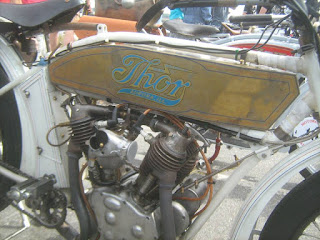 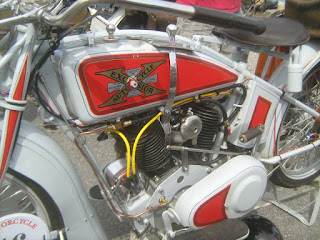 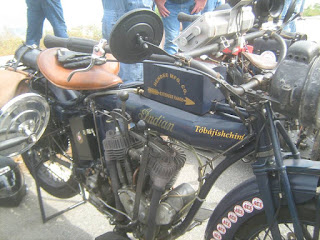 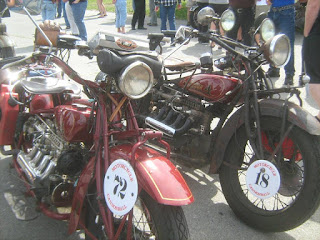 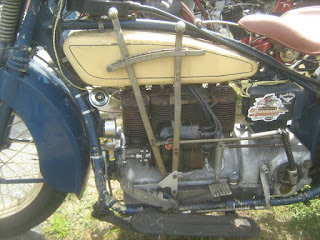 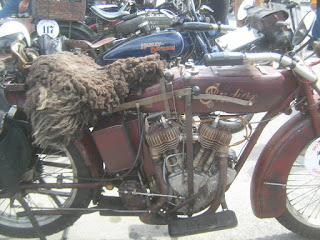 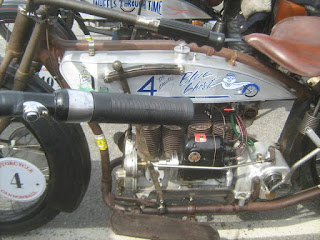 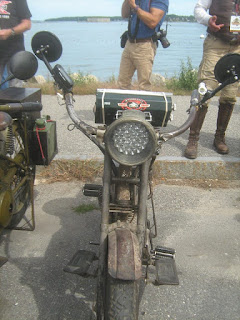 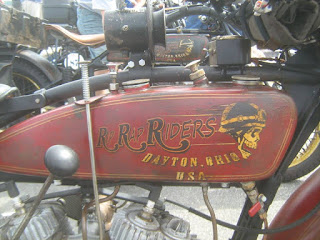 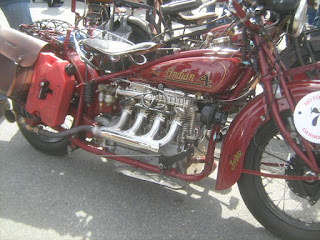 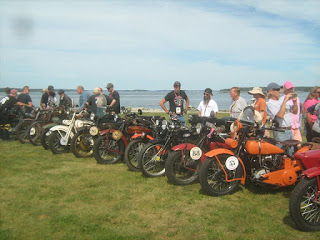 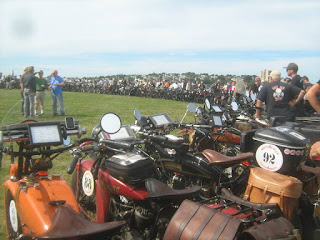 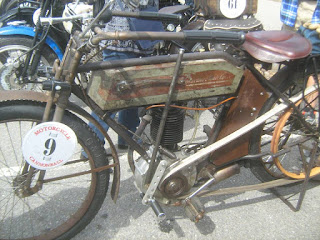 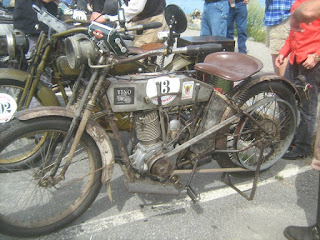 Posted by Richard Miller at 4:31 PM No comments: