A snap from back in the day of Royal Enfield's Constellation model. The picture is marked on the reverse '1958'. This was the first year of the Constellation and at this time it was the biggest and most powerful Brit bike you could buy. The 692cc engine was bigger than rival marque's 650cc offerings and the 52bhp on tap was a significant amount of power for the time - to put in to context this was 7 horses more than the Rapide from now defunct Vincent but 3 less than a Black Shadow.

Note the remote float chamber of the TT carb fitted to the bike, early Constellations were fitted with racing carbs, later replaced by twin monoblocs.

Last weekend was spent up in Stafford standing on an autojumble stall endeavoring to have a bit of a clear out. Overall the exercise was a success, cash was raised and unwanted parts disposed of.

With the concentration on autojumbling I didn't get much of a chance to wander around the show and when I did it was crowded to the detriment of photography but here are a few images taken during quieter moments...


Posted by Richard Miller at 9:51 PM No comments:

Motorcycles and Motorcycling in the USSR from 1939 book review 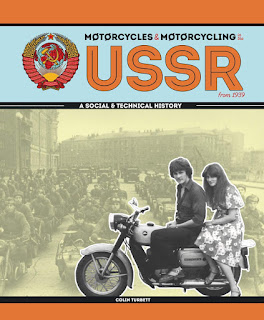 Back in my university days I was a student of Russian politics. I can't say that I've gone on to practically apply those studies very much but it has left within me an enduring interest in all things Russian. That interest combined with a fascination for motorcycling obscurities meant that I had to get a copy of Colin Turbett's book just as soon as it came out.

As far as I know this is the only work of any size about Soviet motorcycles in the English language; thankfully Colin has made a decent job of it and done the subject justice. There are 128 pages and the various brands and models are covered along with social history, politics, sport and The Great Patriotic War. What I found particularly delightful is the number of period photos reproduced in the book, these are images seldom seen over here. Equally the reproductions of Soviet advertising material.

What makes the book a success is certainly the background and social aspects more than the machines themselves. The Soviet Union was not noted for the great choice it gave it citizens in either personal freedoms or consumer products and motorcycling was no different. There are only a handful of manufacturers and due to the nature of the planned economy products were of a standard design and many of these were developments of overseas designs such as the DKW R125 and BMW R71.

Colin's interest, expertise and passion for the subject matter is very much in evidence in the book and it comes strongly recommended. Even to those with just a passing interest in Soviet history and motorcycling the book is an enlightening and entertaining read.
Posted by Richard Miller at 9:54 AM No comments:

Email ThisBlogThis!Share to TwitterShare to FacebookShare to Pinterest
Labels: books

A slightly blurry photo of a Norton Model 18 from, at a best guess, 1936 - though it could easily be a year either side.


errata: Thanks to John de Kruif of the excellent Vintage Norton site for pointing out that the cradle frame (the connecting pieces of frame under the engine) on this bike makes it an ES2 rather than the open loop framed Model 18 that I identified it as.

Posted by Richard Miller at 5:52 PM No comments:

A willfully obscure post this one, but really aren't they all? I'm in the process of a bit of a clearout and the time has come to pass these new old stock Royal Enfield legshields on. They're going to be up on eBay within a couple of days but I thought it was worth sharing the pictures here for posterity as they are rather nice.

First of all they are rather rare items and more so to find them new old stock in their original packaging but also they are quite lovely in themselves. The design goes way beyond the utility function required of a pair of legshields and a lot of flare and thought has gone in to the styling.

Look carefully and there is a lot of careful detailing in the pressings, the central rib of course gives rigidity as well as style but the indented v shapes top and bottom are really just pure styling. The overall shape is wonderfully curvy too.

I just hope they end up with someone who has an Ensign and will fit them.


Posted by Richard Miller at 11:10 AM No comments:

A tricky identify this one. Certainly late twenties and without doubt rather a glamorous machine. The bike is quite distinctive but I've failed to find a good match. The tank to me looks most like Montgomery, or perhaps a Zenith? Can anyone out there elaborate?