A Triumph NSD combo at an intriguing location, not too sure what is going on in the background there, perhaps a seaside hotel? The NSD was Triumph's replacement for their upmarket sidevalve model, the SD. In reality the new NSD didn't owe a lot to the SD apart from a shared engine capacity of 550cc and the single cylinder side-valve format. The NSD was introduced mid term in 1928 and dropped in 1930.

Great list of official accessories for your mid to late fifties Douglas Vespa. Scooter accessories really haven't changed much in the last 60 years....


Posted by Richard Miller at 12:15 PM No comments:

Sometimes a project is 99% finished and then somehow just gets left for a while. I got that far with my Alan a couple of years ago and then stopped for a while and just hung it up on the wall as an ornament. Truth is the reason that it stalled was that I wanted to finish off the full Campagnolo spec but was a bit bowled away by the price of a decent set of aero pedals.

After a good while of sitting looking at it all forlorn and pedal-less I resumed the search with adjusted expectations of how much I would have to pay. After a while adrift on the bay of e a pair floated my way, they're not perfect but they're not half bad either. Seemed like a good opportunity for the Alan to see some metal polish and daylight. So here it is in all its completed glory, shiny and be-pedalled.


Posted by Richard Miller at 10:48 AM No comments:

Excelsior's line up was always an interesting one from pre-war days right up until the end. Someone in the company obviously had a penchant for the unusual as they weren't scared to throw a few surprises in to the line up alongside the bread and butter. Pre-war, for such a small company, the range was impressive: from depression era cheapies through to the uber glamorous Manxman models.

1958 was in the twilight for the Excelsior company but they were still managing to produce their own motor in the form of the Talisman twin. The same motor they managed to sell to Berkeley for use in their microcars. There was a three cylinder 500cc two stroke Excelsior that was made for the four wheeler sporting Berkeleys, what a massive pity that it was never offered in their motorcycle range. There have been several special builders over the years who have put together their idea of what Excelsior should have done so it was certainly possible and seems like an opportunity lost. Imagine, a two stroke air cooled triple offered twenty years before the Kawasaki H1.


Posted by Richard Miller at 12:47 PM No comments:

Sorry for the post title, couldn't stop myself. Nowt much to say other than a charming snap from probably the mid thirties of a pair of ladies with their light roadster cycles and a lovely coastal view in the background. 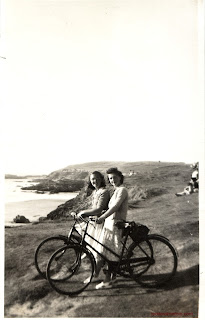 Posted by Richard Miller at 12:28 PM No comments:

My R80 combo was suffering from continuing rough running despite a carb rebuild. It felt as if it was running partly on the choke and with the tank off and a look at the woeful state of the choke cables it probably was. The bike only needs choke for initial start up on a cold day so I did consider dispensing with a choke altogether but thought better of it. The choke cable routing is pretty torturous and the cables are pricey. Luckily I remembered browsing through the Motorworks website and seeing their choke conversion a few weeks earlier. The conversion is only a bit more expensive than a new set of cables and simplifies set up and cabling. Of course there is the disadvantage that you have to bend down to the carbs to operate the choke but I found that a small price to pay.

The kit is nicely made in stainless and comes with a neat aluminium blanking cover for the choke lever on the clutch cluster. Fitting is straightforward though a little bit fiddly getting the pinch bolts in place and at first it seems like the operating angle for the plunger is all wrong. In practice the new levers work fine and setting them up is a doddle. Smooth running was restored to the bike. Now, if I could only sort out the ferocious thirst of the dreaded Bings!

Easy enough to recognise the bikes, a brace of Douglas. They are presumably from the First World War era, the bikes, riders and uniforms all look authentic enough so the studio pose is rather incongruous. I believe the uniforms are British. Wouldn't it be wonderful to know the full story..

Posted by Richard Miller at 12:31 PM No comments:

Easy to identify this flat tanker as a New Imperial as it's written prominently on the tank, further than that I am not sure. NI had a rather bafflingly wide model range through the twenties, all with numerical codes. This could be a Model 1, 2 or 3 with perhaps an A, B or C suffix. I'm guessing at a 293 or 346cc motor and a year of arounbd 1925. Any NI experts out there please do chip in. 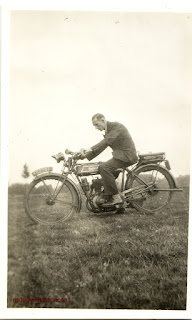 Posted by Richard Miller at 10:38 AM No comments:

I first got to know these Yamaga AG bikes when riding around Africa on my '55 Bullet 10 years back. I remember seeing them in showrooms and out and about. They were cheap to buy and look like they are made to take a beating. In Africa they are popularly used by charities as ways of getting out in to remote areas. They are even used with sidecars as ambulances in some countries. Over in Australia and New Zealand they are widely used on farms and sheep stations.

The AG stands for Agricultural and they first appeared in 1982 and are still made today in pretty much the same spec. They are rare bikes in the UK and this one came up for sale just as I had some money in my pocket from selling another bike and was looking for something to use to compete in long distance trials. I was riding an Enfield Bullet in trials, I had developed it to a point where it was fairly competitive and a good ride. Of course I then sold it. My new brief was for something light, cheap, reliable and low maintenance. In buying a 30 odd year old farm bike I pretty much failed failed on all these counts. I didn't pay a lot of money for it but probably plenty for a slightly knackered small Yamaha. It is fairly light but not compared to other small trail bikes and as for reliability, well it hasn't gone wrong much but then again I haven't attempted many miles on it as it is still running rather badly....

On the plus side the bike is beautifully balanced and should, when sorted, be a really excellent bike for long distance trials. Plus it has a bit more character than just another Serrow.

The AG 200 is based squarely on the XT200, the smaller brother of the cult XT500 off-roader. The engine is a sweet little 200cc ohc unit that is used in a number of other Yamahas notably the BW200 and TW200 and is very similar to the 225 Serrow. The rear wheel is 18 inch and the front 19. Essentially the bike is XT200 with added weight: it has a cute front rack above the headlight, a huge rear rack that could carry a sheep, enormous engine protection bars, a fully enclosed chain case and as catalogue spec it came with a large tubular handlebar 'fender'

This particular bike came to me with an electrical problem - a new indicator cluster had been fitted but the owner hadn't been able to wire it in. After working at it with a meter for a few hours he had my every sympathy. There are a lot of wires inside that headlight, perhaps they've been muddled up a bit over the years but they don't all work together as they should.... Took a while but sorted in the end. A test ride exposed some carburation glitches. First look showed a knackered rubber intake manifold. This replaced it was slightly better but not great. The carb is a Mikuni diaphragm type, spares are not easy to come by and a new diaphragm to replace the old and tired one is a bit pricey. In the end I've bought a regular traditional Mikuni VM slide type carb (though a generic Chinese one) that is for a BW200. The carb only cost twenty quid and to be honest it looks pretty good, how do they make and sell them for that price?

The carb swap is still pending but in the meantime the bike runs fine with just a touch of choke. It's had a brief green lane run at which it acquitted itself excellently and has low enough first two gears that it can virtually climb a cliff. The little AG 200 is indeed so far shaping up to be an excellent long distance trials contender. It doesn't have a great deal of oomph on the highway but it will cruise along 55mph-ish. The bike was perhaps imported from Japan as it has a very irritating red light that appears on the speedo as soon as you top 50. That had me fooled for a while, I thought it was an oil light and the thing was getting starvation when revved hard.... had to look it up on t' web when I got home from the test run!

There we go. Should be sorted soon and hopefully that'll be the last of the maintenance on it for a while. I'm not going to give it anything like the punishment that would be meted out to it on an outback sheep station. It's different, some might say ugly but I would say it has a certian rugged charm.

A veteran Triumph poses for the camera. I had originally listed this down as a Model H but thanks Nick Smith for correcting me and pointing out that the bike is a veteran. I didn't look closely enough and the hub clutch / gear dates it as an earlier bike, looking at Peter Cornelius' pre-war Triumph site I would go for a 1913 model: a Type A Roadster Free Engine Model or a Type C Roadster Three-Speed Model though I am certainly happy to be corrected by the more knowledgeable.

The final batch of pictures from the Vintage Revival. Happy memories from a month ago.


Posted by Richard Miller at 12:25 PM No comments: