Here's something for the hardcore Enfield nerds out there. Recently I managed to pick up a spare gearbox for my Enfield twin race bike (the early postwar type with the clutch operating on a scroll mechanism) in order to rob the kick start mechanism from it. The 500 twin racer is bump start only: I have it registered on the road and, quite honestly, having to run and jump on to it to start the beast is an absolute pain in the a***. I live on a hill and the very last thing you want to have to do after spending some workshop time on a bike is to find it is not running after having gotten to the bottom of aforementioned incline.

On dismantling the box fitted to the bike I got something of a surprise. Whereas I had expected just the kick start shaft to be missing (obvious as it is blanked off) I found that there is no provision for a kicker at all - the gear on the layshaft is not cut for a kickstart pawl. What's more it is a close ratio set that raises first, second and third. I've swapped the close ratios out for a pair of gears with kickstart pawl but time will tell if I miss the close ratios and regret the change....


Posted by Richard Miller at 9:33 PM No comments:

The third in an occasional series of self indulgent nostalgia trips...

In my enduring quest to find the perfect airhead BMW I decided upon trying the very last one, the R100R. I had until then owned an R65 (an excellent bike that I bought with an RS fairing fitted, I later removed the fairing and the bike looked a lot nicer but performance in every aspect was worst..) Then an unfaired R80, pretty good but not one to greatly inspire. Next up to come my way was the R100R.

The R100R was introduced to mollify the hardcore of old school beardy BMW riders who had been mightily upset when the airheads were dropped in favour of the new K Series flying bricks. The 100R was in essence a GS in roadster clothing. Overall the package was excellent, an old school engine in up to date running gear. Brembo brakes, Showa suspension and paralever swinging arm.

Nowadays the 100R is seen as being ahead of its time in the retro market. Not only that it was something of a pre-cursor to the super moto scene - in being a big torquey motor in a naked bike with nimble frame geometry borrowed from an off-roader and excellent brakes.

The 100R pushed out 60bhp, 10 less than an RS but considerably better on torque and it had great fun point and squirt characteristics. In fact on a twisty road it was as fast as anything out there. Now I remember the bike and write about it I kinda want another one...

Personally I found the downfall of the 100R to be its low gearing. As the bike was a parts bin model with most borrowed from the GS range BMW did not bother to go to the expense of changing the gearing to be more suitable for a purely road orientated machine. This was the reason I sold it in the end - I had wanted a motorway cruiser to back up my classic bikes but the 100R was way too buzzy for a big bike when pushed along at motorway speeds.

Definitely fond memories of this machine though and one I would recommend to anyone (unless motorway stonking is your thing..)

Posted by Richard Miller at 10:36 PM No comments:

A rather lovely late vintage Scott. I'm not familiar with the nuances of specs between different models of Scotts of the period. I feel fairly certain though that this particular machine is a three speed model from 1929 or 1930. Perhaps there is a Scott guru out there who can enlighten?

Posted by Richard Miller at 9:48 PM No comments:

It was now well over a month ago but here are the last few pictures from this year's GDSF. Here's to hoping I am at home for it again next year...

Posted by Richard Miller at 7:24 PM No comments:

Watsonian's brochure from 1990. They might be undergoing something of a renaissance at the moment but 30 odd years ago sidecar sales were very much in a trough and to all intents and purposes Watsonian was the last man standing of the once illustrious British sidecar manufacturing industry. 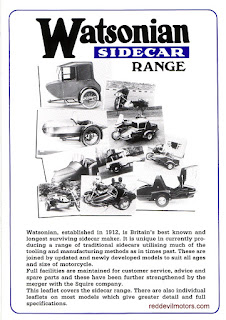 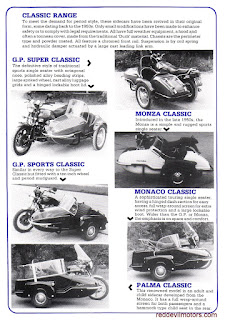 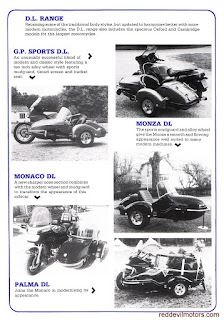 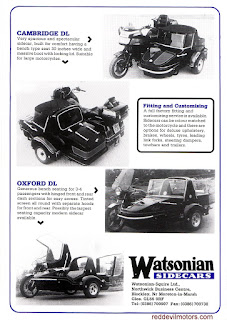 Posted by Richard Miller at 8:03 PM No comments: