Third Wednesday eve each month through the summer there is the chance to have a hare down Henstridge airstrip. There's no timer, but then again there are no rules apart from wear a legal helmet, pay two quid and sign a disclaimer. A good chance to race a mate, give your bike its head or make practice runs with a pukka drag bike / sprinter.

A few classics turn up, I haven't seen anyone else run their oldie down the strip which is a pity given that there's no bar on what bike you ride. I was hoping to give the Gilera a run but it was off colour on the way over so I decided to skip it. There were a few monkey bikes and chinese 125s running so I might have given them decent competition! 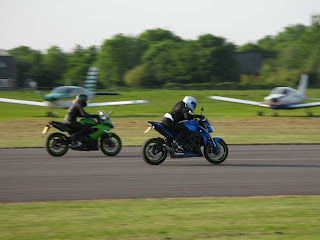 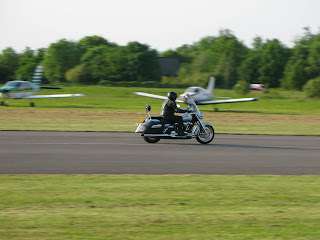 Always nice to take the family along to a local show and the Three Okefords Preservation Society's Rally is one of the better ones. Great weather helped but there were plenty of interesting exhibits of all kinds.

Posted by Richard Miller at 8:59 PM No comments:

A free Saturday to go out and play and several events to choose from. As the weather was so hot, I didn't want to get up early and Beaulieu is just down the road, I decided on the Spring Autojumble. The added bonus was that my British Motorcycle Charitable Trust membership got me in for free.

The Spring jumble feels like somewhere between a quarter and a third of the size of the Autumn one, that said it is still reasonably large. The atmosphere is good and there are interesting things to see though the two wheeled content is small. Most of the stalls are regular traders rather than garage clear out types, I only found one bicycle light to buy but there was plenty to gawp at and just wandering around and having a natter and banter with folk along the way makes for a pleasant day. Below a few pictures of odd and sods that caught my eye...

From the family album of the Powell family of 45 High Street, Pensnett, Brierly Hill, Dudley. The father Fred was a keen photographer. The bike is evidently early to mid twenties but I cannot recognise the marque, please get in touch / comment if you know. The rider looks to be rather a character!

The Best Days are Bantam Days

At least that is what BSA reckoned in their advertising blurb. Can't totally disagree as I've had some great fun with Bantams over the years. With the sun out it seemed like a good excuse to give the newly rebuilt D1 engine a go and see if the new Electrex World ignition has made much difference to the performance.

First stop was the petrol station. Having not run a two stroke for a couple of years I made the rookie mistake of filling it up, only just leaving enough room for the oil and then when the cap goes back in the extra displacement of the oil measure causes the petrol to slosh out everywhere. Luckily with it being a hot day the overspill evaporated off pretty quick and I gave the bike a kick with fingers crossed that we wouldn't go up in a big fireball. Then I noticed that the float had jammed and more petrol was flooding out.

Switching the petrol tap off was enough to sort that one. But first big test of the new ignition was would it have enough juice to fire up a flooded bike? Nope to that so bump start time. With petrol sloshing out of the cap we sputtered in to life. 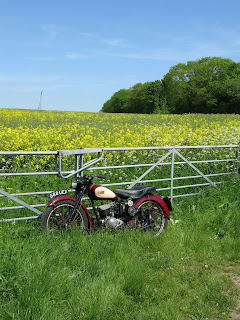 My next mistake was to pick a route with a lot of hills. The rose tinted glasses hadn't warned me just how awful the Bantam's gear ratios are. Screaming uphill in second at 30mph, change up to third, bog down and slow to 25mph, change back to second and then repeat. I guess I carry about three stone more than teenage me though so that's not going to do the little bike many favours. 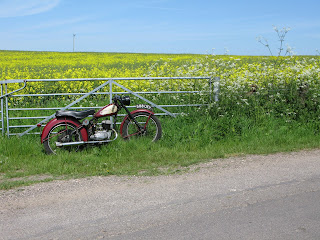 So, did the new ignition improve performance at all? Frankly no. Starting is however way way better as is tickover. The bike is certainly a lot better mannered.

On the flat the Bantam is actually quite pleasant. Handling is fun, brakes adequate and it will buzz along at about 45mph. Give it the sniff of a hill though and all is lost. Not ideal living in a hilly area as I do. Next question then is do I keep a hold of it and develop the bike a little? Or do I find a new owner for it? I've got a 150cc D3 barrel which I hear can help iron out the frustrations with hill climbing. Perhaps give it one more go with that fitted and if that doesn't work I should get less sentimental and pass it on. 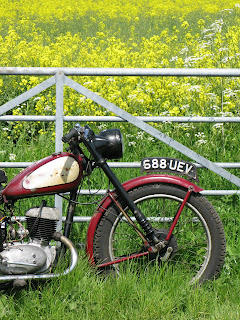 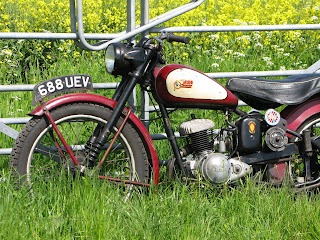 If you go down to the woods..

Sometimes for short moments where you are can be the most beautiful place in the world for that one snapshot in time. Today the sun shone brightly, the skies were blue and out we ventured on the trusty Velocette to admire the splendor of local woodland in late spring.

The light was perfect, the woodland vividly green with moss and lichen and the ground thickly carpeted with bluebells. Wonderful! 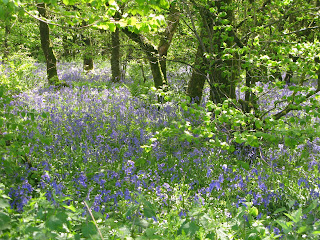 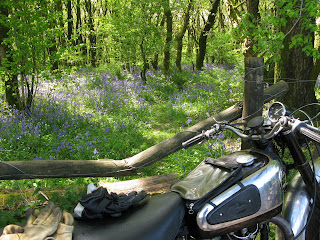 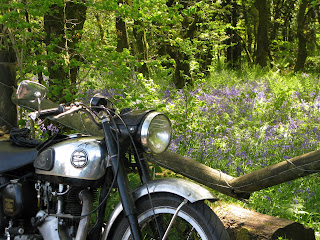 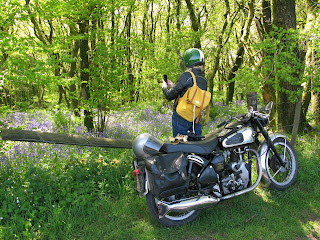 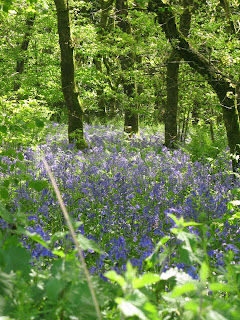 Posted by Richard Miller at 7:19 PM No comments:

Email ThisBlogThis!Share to TwitterShare to FacebookShare to Pinterest
Labels: velocette

UK applicable only this post, so if you are not using an old vehicle in Britain skip on to the next post!

It is by now common knowledge among the old vehicle fraternity that from May 20 the MOT testing exemption will be extended from pre 1960 vehicles to any that come in under the historic vehicle taxation class - ie essentially any that are more than 40 years old.

The grey area had been with vehicles that were 'substantially changed' - these would still be required to take an MOT test. There was a fair bit of concern about what substantially changed meant and to which vehicles it would apply. You could of course say, well just MOT it anyway to make sure. But what if for example you ran a BSA Bantam and it had a 175 motor fitted in place of the original 125? All well running it with no MOT until you have an accident and then it is all suddenly up for debate if you have 'substantially changed' it or not and will your insurance be valid?

Finally DVLA have produced a document that clears a lot of the confusion up. Quite honestly the guidelines are all fairly sensible and real world. Capacity changes are allowed as long as the motor corresponds to 'alternative original equipment'. Putting in more cylinders or non-period engines are not. I wouldn't like to test it in court but I read the document as even giving Tritons and other period specials the green light for skipping the MOT. Importantly and sensibly modernisation of running gear is acceptable when it improves performance / efficiency, so no problems with fitting a Hyabusa disc and monoshock rear end on your veteran Triumph...

There are still grey areas, it is quite honestly impossible for there not to be unless they were to insist on only OEM parts to be fitted to a vintage vehicle and that is not real world practical. The best bet is to have a read of the document for yourself:
https://assets.publishing.service.gov.uk/government/uploads/system/uploads/attachment_data/file/670431/vehicles-of-historical-interest-substantial-change-guidance.pdf
And if you have any doubts left about the status of your machine then it probably is slightly sketchy so MOT it anyway!
Posted by Richard Miller at 8:45 PM 1 comment:

The bicycles in my workshop have gotten a bit out of hand of late so I've decided that perhaps several of them need new homes. I could consider posting them but would far rather they were collected. Any enquiries just email - address to the right.