A day of old photos finishing off with this side valve BSA Sloper from circa 1930.

Posted by Richard Miller at 8:11 PM No comments:

Thanks to James Kelly for this image of his grandfather's cycle. Not a great photo of course but the details are evocative down to the ubiquitous saddle bag and style of paving on the sidewalk. 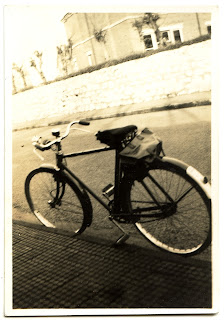 Kudos to you if you can identify the bike this lady is pictured astride. Looks to be 1930s, that is the best I can come up with.

Family transport of the early fifties for the well-healed motorcycle enthusiast. A Sunbeam S7 fitted with a Swallow child-adult sidecar. Note the giant screen fitted to the Sunbeam.

Posted by Richard Miller at 2:18 PM No comments:

This series of sketches was a lucky find in a small box of pre-war literature that I picked up recently. Sadly the condition is a little poor, looks like the proverbial book worm has had a good old nibble at some of the sheets. 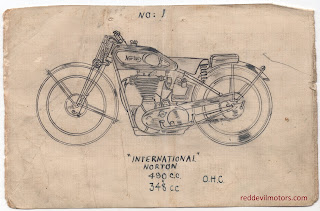 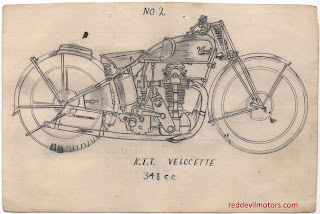 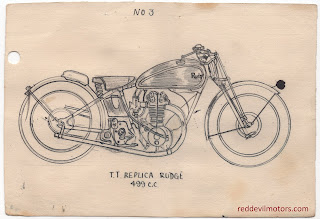 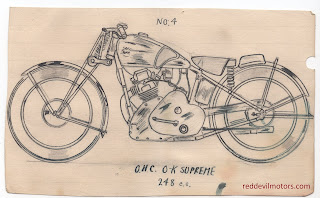 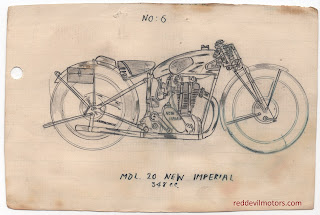 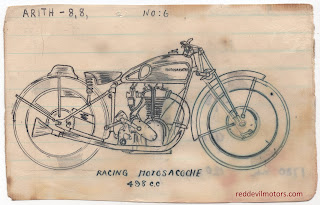 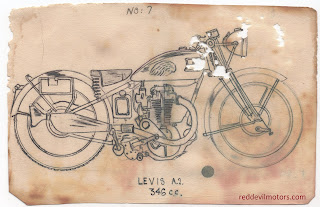 Posted by Richard Miller at 10:15 PM No comments:

Amazonas and Kahena motorcycles from Brazil

A big thanks to Shalon Melo from Brazil for providing this little snippet of his homeland's motorcycling history in the form of the below Kahena brochure.

Information out there on the Kahena is very thin on the ground but from what I can see the brand was introduced in 1990. I have not managed to find out when production ceased but, for sure, the volume of machines to leave the factory was small.

As background the Kahena was a development of the Amazonas, a VW Beetle engined all Brazilian (the Beetle was made under license in Brazil) bike that was made from 1977 up until 1989.

Necessity, as they say, is the mother of all invention. Importation taxes to Brazil were prohibitively high through the seventies and eighties (and are still high to this day) so the concept of the Amazonas was as a locally made machine envisaged to replace the long-in-tooth Harleys in use by Brazilian police forces at the time.

The Amazonas was, to say the least, an unusual looking motorcycle and was hugely proportioned and heavy. The Beetle engine fitted gave a moderate amount of power but reliability was excellent. The version of the Beetle fitted to the Kahena was 1600cc and as standard provided 65 horse power. Tuned version were available which gave up to 90. Amazonas and Kahena machines enjoy a bit of a cult following in their homeland and would make a decent, unusual classic anywhere in the world. The beauty of old motorcycles is that you can nowadays value them for charm and riding experience and without direct comparison to their contemporaries. Car engined motorcycles have long been favourites of special builders and there are several VW engined BMWs, Sunbeam S7s and Douglas Dragonflys out there, think of the Amazonas or Kahena as an off the shelf version of one of these. If the subject interests you, check out for comparison the French BFG and MF Citroen engined machines of the same era as the Amazonas and Kahena.

Rather than attempt to re-write what is already out there here are some links for those interested to find out more about Amazonas and Kahena bikes:

The Amazonas in Australian Motorcycle News

Motoplanete article in the Kahena (in French)

Posted by Richard Miller at 8:05 PM No comments:

Here's another in the ongoing series of challenges for all of you keen-eyed vintage bike enthusiasts out there. Another nineteen twenty something wotsit. The bike is fairly distinctive with its angular petrol tank and sweeping legshields but I can't for the life of me place it. Is there anyone out there recognises the make / model - if so please do get in touch be mail or just comment at the bottom of the page. Thanks. 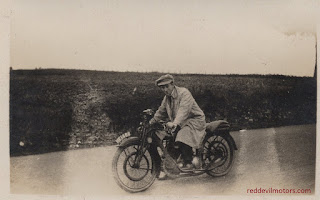 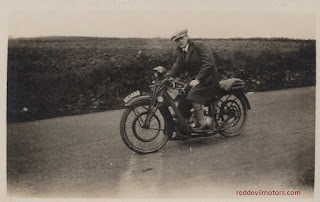 Posted by Richard Miller at 9:51 PM No comments: 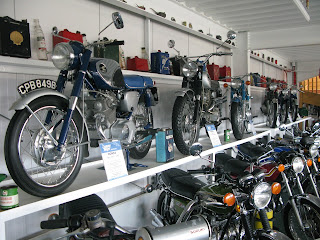 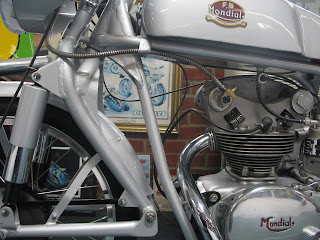 Posted by Richard Miller at 7:35 PM No comments:

The Morgan 3 Wheeler brochure for 1946. Morgan had a production hiatus for the war and re-introduced their three and four wheelers in 1946. The Ford-engined F Type continued until 1952 by which time it was distincly old-fashioned and the company concentrated production on their four wheelers.

Posted by Richard Miller at 8:24 AM No comments:

I wonder if anyone out there can recognise the location? Doncaster is a fair bet given that The Earl Doncaster Arms is next door offering 'Hotel, Motor Garage, Cyclists Retreat, Good Stabling and Loose Boxes'. There is an Earl of Doncaster Hotel still extant but it looks nothing like the building in the picture. Could just be though that it is just an advert on the side of a house... Also, of course, Doncaster does have a racecourse so it figures that Racecourse Garage next to The Earl Doncaster might be in Doncaster!
It looks rather like an event is taking place, the Motor Cycling Club's London Edinburgh trial went through Doncaster so that is a fair bet as to what is happening.

Taking a close look at the bikes round about 1912 is a good guess for the year and marques to be seen include Douglas, Rex, CCR and Triumph.

Interesting to note that the most prominent service of the garage is tyre repairs. 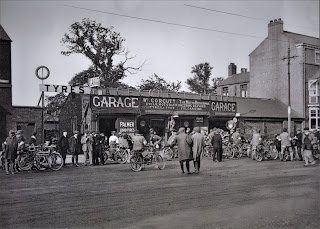 Posted by Richard Miller at 8:21 AM No comments:

Here's the second lot of snaps from last Autumn's visit to Sammy's to eyeball the newly opened extension. No theme to the photos, just some interesting machines that tickled my fancy. 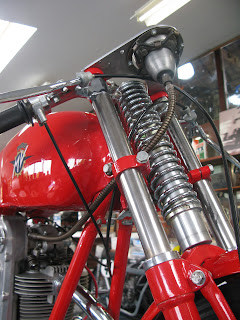 Posted by Richard Miller at 9:07 AM No comments: