Another mystery bike photo. All I can say is that it is Japanese and looks to be from the fifties.

Is there anyone knowledgable on early Japanese bikes that can identify the marque? I'm guessing from the chap's uniform and the way the bike is accessorised he is probably a policeman and this is his work mount. The bike looks to be quite American flavoured but is too small to be a Rikuo.

Personally I'm fascinated by early Japanese machines from the days before the big four. They are a whole parallel universe of motorcycling, so many styling cues and engine formats borrowed from European models but mashed up together and subtly changed and in many cases improved.
Posted by Richard Miller at 3:22 AM 2 comments: 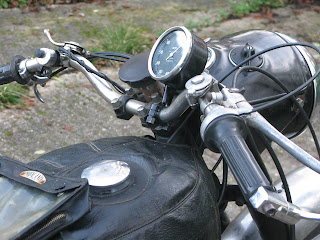 Here's something to sort out the true rivet counters from the wannabees.

Personally I'm not massively bothered if something is exactly correct on a bike or not, as long as it looks right then it is good as far as I am concerned. If it is a massively rare or highly original piece of machinery then it would be a shame if it was wrong, but if it is one of many hundreds of examples out there in my mind it is good if it has a bit of individual character.

In the case of my '55 Venom I felt that in the case of one particular part what is actually original gives character as you won't see many of them out there. And the part in question? The rev counter mount..

The earlier Venoms were not offered in specific Clubmans spec as a separate model but there were a number of sporting options that could be chosen. A rev counter was one of these options. When a Smiths tacho was supplied as an option it came with a bracket that was made from the handlebar clamp from a set of Webb girder forks. The handlebar end of the clamp goes on to the bars and the smaller diameter side holds on to a short length of tube onto which is welded a flat plate drilled for the tacho to mount onto it. It is a slightly cumbersome arrangement that was correct through to (I believe) 1959. I have seen the same arrangement on Norton Dominators of the era and undoubtedly several other marques used the same fitting.

I am guessing that the early tacho fitting is so rare nowadays partly on account of it being rather ungainly and easy to upgrade to a later Thruxton style mount. I presume too that many bikes did not actually leave the factory with a rev counter and enthusiast owners upgraded machines later in life with parts that were current at the time.

When I became aware that this esoteric early bracket was correct for my bike I felt a yearning to find one. It has taken quite a long while (a couple of ebay near misses on the way stymied by too shallow pockets, or perhaps an unwillingness to go three figures for a little doodad) but whilst at the Stafford Show last October I found a chap who was making replica ones for Mk VIII Velos - actually the same part. And now several months later I have gotten round to fitting it, and very chuffed I am too. Behold..... 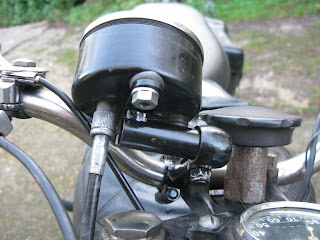 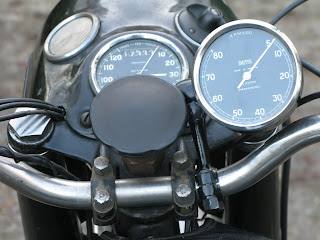 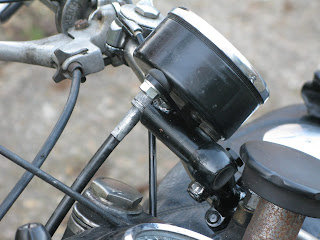 Email ThisBlogThis!Share to TwitterShare to FacebookShare to Pinterest
Labels: velocette

Another brochure for Surrey Sidecars, this one from around 1960 and very kindly provided by Richard Barnes, grandson of Edward Ford - the chap behind the company.

More on Surrey Sidecars to come...

As an aside to two wheelers, Edward Ford joined the Merchant Navy after leaving school and there is a fascinating account of his adventures here: http://www.pwsts.org.uk/edwardford.htm His maritime career began coinciding with the beginning of the Second World War. The account gives an amazing insight in to the rigours of life at sea at the time and encompasses travel across the globe as well as the rigours of the Atlantic convoys. Well worth a read. 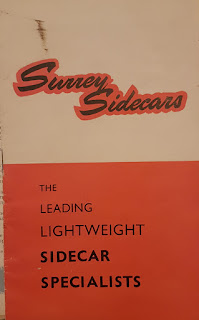 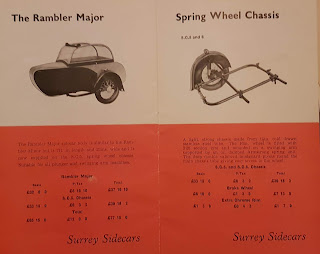 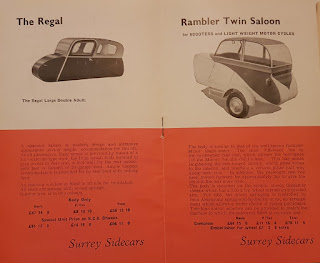 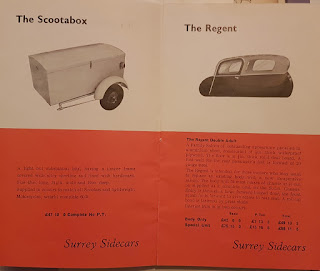 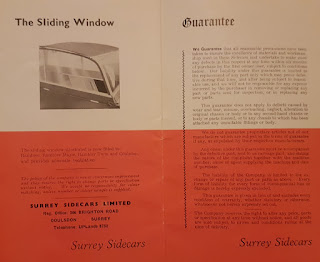 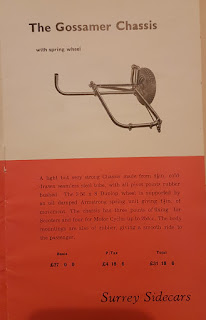 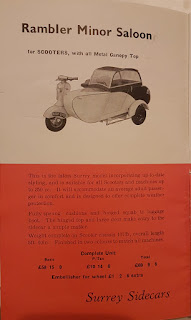 Posted by Richard Miller at 4:56 AM 2 comments: 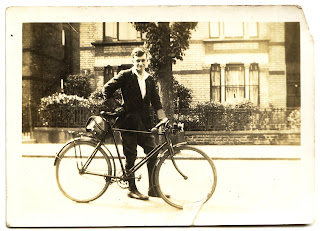 Thanks to James Kelly for this pic of a chap with his sporting cycle. Really not the first idea as to the marque but there are a few interesting details to pick up.

From the style of the cycle it is from the twenties or early thirties: current with, but outdated by, the 'Bastide' generation of lightweights. Most manufacturers offered a sloping top tube drop bars model like this, lighter than a standard roadster and definitely racier but still with rod brakes. Most were catalogued as 'road racer' models or something similar.

From the clothing style I would say the picture is taken in the thirties. Look at his heavyweight gauntlet gloves which are rather incongruous. On the cycle itself note the steep gearing, heavy rear rack (possibly a Brooks) and acetylene front light. I find interesting the position of the bell on the top tube, not something you see on old cycles nowadays, I think I'm going to replicate that on my own road racer.
Posted by Richard Miller at 10:52 AM 2 comments:

A big thanks to Geert from the Netherlands for getting in touch about the mystery flat tanker picture published a week or so back.

It is a MAG engined Ariel, a model that I was completely unaware of, and Geert sent the below picture to confirm. 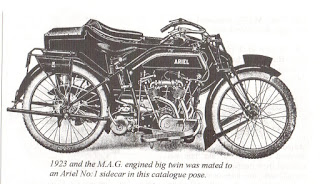 Posted by Richard Miller at 10:24 AM No comments:

Always keep one in reserve

A dry day has been a rare thing this winter down my neck of the woods. I needed to run an errand so it seemed like a good excuse to use a bike and of course I was running late. First choice for some exercise was the Velocette. Stuck carb float and petrol all over the floor. Next up Yamaha AG, low on oil. So out came the trusty Bantam and it did the job perfectly.

Somehow this experience justifies keeping multiple bikes in the garage. Don't even think of suggesting that just one reliable one would be a better bet....

Here's a challenge for the New Year. A rather tasty v twin flat tank combo from the early twenties, but what is it?

The engine looks like a MAG to me, but beyond that I'm not too sure. At first I thought Matchless but the forks don't match Matchless pattern.

The outfit is nicely accessorised with an electric lighting kit, legshields and handlebar muffs. The gentleman behind is dressed the part too.

If you can identify the bike please do comment or email. Tip - to see a higher quality larger copy of the image right click and open in a new tab.

After an involuntary break from long distance trials (due to work - boo!) I was scheduled to be at home for the 2020 Exeter.

The entry form duly went in and plans were made to prep the Yamaha to pop its trials cherry. As they say to fail to prepare is to prepare to fail and I really did set myself up for a no start. I thought I would have plenty of time to sort the bike out over Christmas but I had underestimated the time that would be taken up with familial duties. The Yamaha AG has some wiring peculiarities introduced by owners over the years, I thought that a couple of evenings would be enough to sort them out. Very much not so. I ended up getting the bike mot'd the day before the trial and the best I could do was to get the horn and stop light working so it scraped through a daylight mot.

Normally a daylight mot would spell disaster for a long distance trial but our merry band had entered the day trial with a start at the Crealy breakfast stop and missing out the night sections. Fortuitous as it turned out.

Somehow it felt a bit of a cop out turning up to start the trial whilst the majority of competitors had been on the road all night and were taking the opportunity of the enforced hour break at Crealy for a power nap. However the difference for me in doing the day trial is one day away from home versus three so it really does make it a lot more accessible for those with families and or a busy work life.


The first section on the day trial was Tillerton Steep and I was surprised how easily the little Yamaha rode up it. Mind, up until now I have been used to competing on a road going Enfield Bullet.

All went well up until Simms. Weighed down by two portions of cake prepared by the wonderful ladies at Islington village Parish Hall I approached with too much confidence and too little speed. The re-start was easy, I cleared the slippery slabs but by then had lost line and rode it up the bank on the steep muddy section after the slabs and came a cropper.

Confidence knocked I then fluffed the next section, Tipley Hill, and footed. Back on form after that though and the last section , Slippery Sam, was a clean.

We made it to the end point in Torquay roughly on time. Sadly though no time for victory celebrations as I needed to get back to the van at Crealy before sun set.

All in a great day's sport. The AG bike proved its mettle and didn't let me down. A big thanks to all the Marshals, helpers and organisers and I just hope it isn't such a big gap as last time until I enter the next trial. 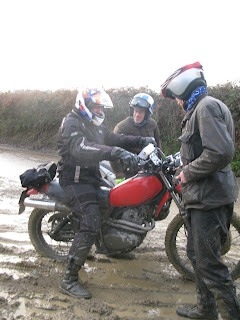 Posted by Richard Miller at 8:58 PM No comments:

Sturminster Newton New Year's Day Run is in its 25th year now and has become the local institution for nearby enthusiasts to greet in the New Year.

As ever there was a marvelous selection of old time machinery to view, from tractors to Lamborghinis.

Having stayed up later than intended and feeling slightly sorry for myself setting off from home at 9am I decided that the little Beesa Bantam would be a suitably gentle ride. The run was pleasant but the weather not kind, we moved through varying degrees of dampness from mist to mizzle and beyond.


Posted by Richard Miller at 8:50 PM No comments: