Here's an early post-war (c1950) rigid Triumph Speed Twin. The optional sprung hub is not fitted on this one but as far as I know the chromed tank was an extra.

This particular Triumph seems to have been quite well-used and the home made pillion looks well padded! I've no idea where the bike is registered, that's certainly not a British number plate on the front mudguard.

Posted by Richard Miller at 2:55 AM 2 comments:

A very Merry Christmas to all! 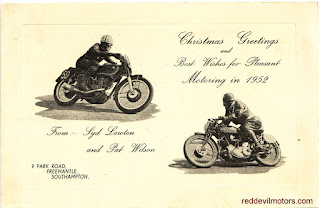 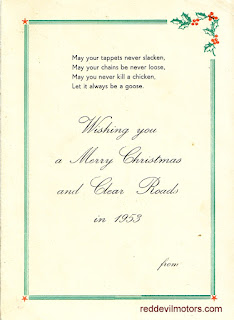 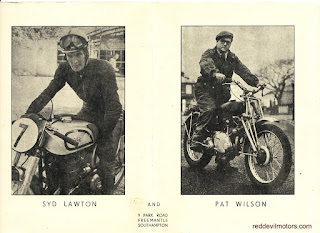 Posted by Richard Miller at 4:08 PM No comments:

There's not been an earlier motorcycle on the blog for a short while so to make that right here's a few snaps of a Triumph Model H combo. The bike was registered in Smethwick, near Birmingham, and one of the pictures is annotated with '1923' on the reverse.


Now I look at pictures of this R80 I think maybe I should have held on to it. I can't remember now but I'm sure the money was needed at the time for something or other... I sold it to a young Italian guy in London, I really hope the bike has survived the cafe racer / new wave custom fad intact as it was a really good, genuine bike. I checked and it has not been on the road in ten years, maybe it went over to Italy with him.


As a 1980 model this R80 was, in my mind, the best of the series. It's still got the classic looks that were lost with the later monoshocks but has decent Brembo brakes as opposed to the rather diabolical old ATE swinging caliper jobs. Though it hasn't got a fairing it is still a very useful daily rider bike and with 50hp is quick enough to cut it with modern traffic. In perspective those 50 horses are more than a new Royal Enfield Interceptor offers and nearly match an older model new Bonneville.

This particular example was low mileage and had been well looked after and pampered. It came to me with the high and wide RT touring handlebars which I swapped for a set of Velocette ones I had kicking around, in my mind the Velo bars suited the Beemer nicely. All round an excellent bike.

Here's a great image of a bygone era. A town centre petrol station and garage advertising 'Used Car Bargains'. Note the lack of traffic, there are not even any parked cars around. Halcyon days...

It seems highly unlikely that the garage is still in existence, I wonder though if anyone can recognise the location?

I bought this BSA Lady's machine a while back on a whim. I had done nothing with it since and it seemed like a good idea to pass it on, particularly as I was getting to the point that I was beginning to feel I couldn't move for old cycles. Very wonderfully the BSA went to a museum in Italy who plan to sympathetically renovate it, keeping the original finish. The museum is the Azzini collection in Soresina. There is no website but they do have a facebook feed - take a look: https://www.facebook.com/velobiciantiche

The BSA is from around 1912 and is rather a rare bird, being the All Weather Model which was offered with heavily valanced mudguards and an all painted finish. In the Edwardian period through to the twenties there was a vogue for All Weather cycles along the same lines as the 'Colonial Model' motorcycles - slightly sturdier machines based on a standard model with large mudguards, a heavier duty finish and less plating as the distinguishing features.

The BSA Lady's all weather was originally fitted with a back pedal 'coaster' brake. This particular example came with a rare Sturmey Archer Tricoaster three speed coaster hub and it looks like it was supplied that way from new.

The green finish appears to be original and, like the All Weather models, was a fashion of the period. Some of the green parts are overpainted on black. I wonder if bought in parts came to BSA in a black finish and were then overpainted or that the green finish was a special order and parts were taken off the production line and re-finished as required?

Roberto in Argentina has gotten in touch with pictures of his newly acquired Parilla Levriere scooter (or Greyhound as the model was known in the UK and States). It looks to be in really sound condition and is a rare and unusual machine.

It is always good to hear from readers of the blog, to see their rides, and better still to help out a fellow enthusiast. Roberto was after a workshop manual so I was able to put him in touch with Philip in France who sent in pictures of his Parilla six months or so ago.