When I started up this blog I had the hope that folks from all around might send in pictures of their bikes from times past and today and the stories to go with them. Just recently it has actually started to pick up and I am getting a steady stream of images arrive in the inbox to publish. I'm totally stoked about it, it's just way more interesting when there is a personal connection to an image rather than just some bike or some guy on a bike. So, big thanks people, keep 'em coming.

After publishing Michael Silvius' picture of himself with Bultaco in Caracas back in the seventies a couple of weeks back he has sent in more pictures and the story behind the bike, as below in his own words... 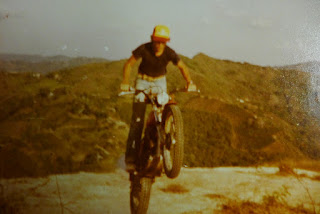 "Here are a few blurry photos of the old Bultaco. Yea that's me, the skinny awkward looking kid with the goofy looking overalls. A couple with my friend Pol Frendin with his Jack Piner Penton KTM 175 in our back yard. As well as a trailer I built with an axle salvaged from a stolen/abandoned Hilman Arrow, to transport the bikes. A few of us playing in the dirt. One of mom posing with my bike. I might have just been fifteen or sixteen then so that would have been about 1977 or 78? 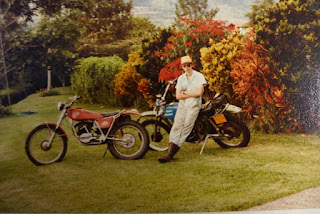 I had pestered my dad for a couple years to allow me to buy a motorbike. He finally relented provided I earn the money  myself. I guess he figured he might as well make a lesson out of it. I bought the Bultaco from a shop that had raced it and it was all beat to snot. Rode hard and put away wet. I patched the holes in the tank where the triple clamp fork bolts had punched through from having shortened the steering stops and repainted it.  Taught myself how to do body work on it and painted a dozen other bikes and a couple cars for others in the neighborhood. Its probably all the Imron paint I sucked up back then that's slowly doing me in today. Got in a lot of trouble with the bike too. I can say I rode in the country with the highest motorcycle mortality rate in the world and survived not without a few scrapes. Wound up under a Jeep CJ5 looking up at the bumper from underneath with my long hair pinched under the left front tire and the bike seat on the right front tire. When the dust settled the ashen young driver came to look at what he had run over and was shocked to find me alive. Had ABS brakes existed back then I'd have become worm food long ago. Also had a demented taxi driver in a Dodge Dart run me off the road in to a seven strand barbed wire fence once. We were immortal back then." 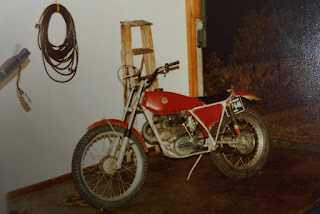 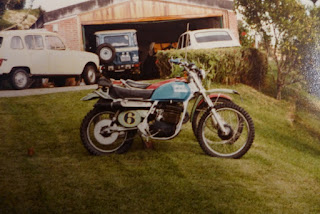 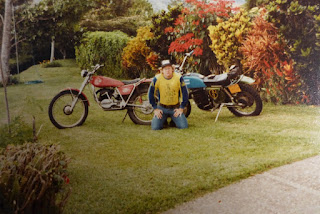 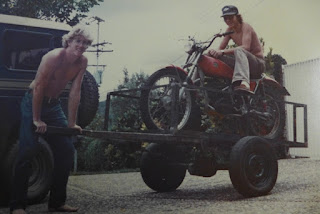 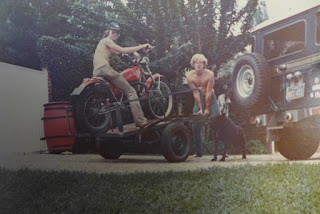 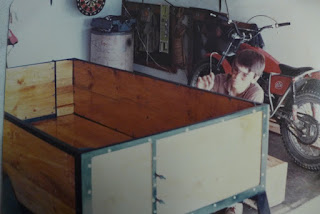 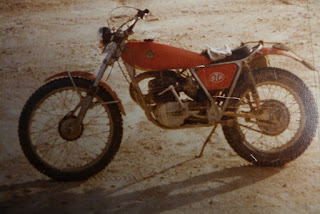 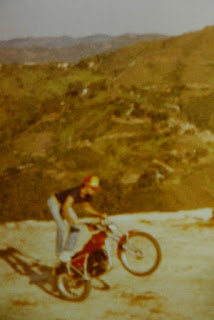 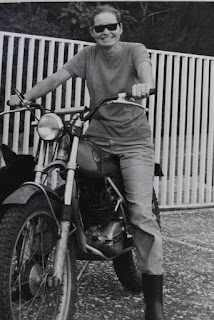 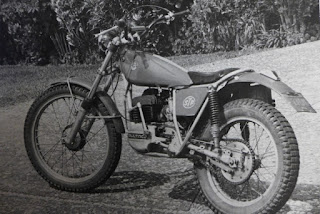 Thanks to David Kenny for forwarding these images taken at the Wooler premises (either Alperton or Wembley) circa 1925. The images were given to David by a former Wooler employee and the ladies on the bike were apparently also Wooler employees.

Please note that I have put a blog logo on the images in order to limit reproduction of them and track. This does not imply any ownership of the images which remains with David and I am grateful for his permission to post.

Sheldon's EMU has posted the archive of George Cohen's Norton pages for all to see once more.

A glorious mess of a website, buried within the jumble there is a great resource of vintage Norton info and wandering through the fluff to get there is entertaining in itself. Access the site here.

Whilst I certainly didn't know George well I always used to enjoy a chat with him whenever I bumped in to him at events, usually the VMCC Somerset autojumble or on the ferry en-route to Montlhery. I would find out about his latest completed projects and he would lament the glacial progress I had made on my Model 19 project... Much missed.

This postcard was published by Douglas to publicise the reliability of their bikes as demonstrated in the theatre of war. This particular postcard has actually been posted and the postmark is from 1922.

The caption on the card reads, 'Artificer Corp. J. Aked, Signals, Cavalry Corps, B. E. F.-"All the Douglas machines under my care have done good work" '

Personally I had to do some quick research to find out what that all means, so for others also unfamiliar with World War One military parlance here is a quick explanation... An artificer is a skilled mechanic in the armed forces. So Mr J Aked was a Corporal in the Signals Squadron of the Cavalry Corps with a responsibility for mechanics (ie the Signals Squadron was the home of the Despatch Riders and Mr Aked was more than likely responsible for maintaining their bikes). The B E F was the British Expeditionary Force and refers to the British Army sent to fight on the Western Front.

More of this please

I was in Chepstow, South Wales recently and passed the local sports centre whilst negotiating my way to the Wye Valley Path (walk it if you get the opportunity - very stunning). Outside the main entrance they've got this excellent free to use outdoor bicycle workshop. The first time I've seen one and such a brilliant idea for encouraging people to use and look after their cycles.

Posted by Richard Miller at 9:00 AM 2 comments:

Thanks to Michael Silvius up in Maine, US for getting in touch after seeing the post on the Montesa 348 that I used to ride around on stirred up a few of his own memories. He forwarded a link to this image taken in his native Caracas circa 1978 when he was 16. I never knew this but trials were apparently very popular in Venezuela back then.

After seeing this photo I just had to ask permission to reproduce it on the blog as it is just brilliantly evocative of an era and straight up cool too. So, thanks Michael for making contact and thanks for letting me post up your picture.

Michael keeps his own blog: http://isserfiq.blogspot.com/ - it's a good read so if you've got some spare time take a look.

Not a lot to add to this snap from a family album other than the bike is a BSA C12 and on reverse is written 'Grandad'.

Here's yet another Edwardian ladies bicycle that I parted with recently, this one an Ariel dating from shortly before the First World War.

A fine cycle in very original condition it is noteworthy for the 'figure of eight' tubing used on the forks and chainstays. Also fitted with a very wonderful saddle. A shame that the fabric chain guard is slightly torn and that the celluloid panels have rotted away on it but otherwise the Ariel should come up very nicely in its original livery for the new owner.

Posted by Richard Miller at 9:00 AM No comments:

Here's another machine that I was custodian of for a while, quite a short while in this case. Notable for being the first Montesa featured on the blog, this machine I owned for a few months around fifteen years ago.

The Cota came my way largely on the merit of it being offered for sale very close to my home and at a reasonable price. The bike needed a small bit of fettling but after that it was a very good example.

Bizarre as it seems with hindsight I never used the Montesa off-road, rather as a runabout around Bournemouth where I used to live. For town riding it was good fun, with such low gearing and plenty of power it shot away from the lights but you had to be ready for some rapid fire gear changing. Once underway it would hold a slightly buzzy 50mph easy enough. Though surprisingly adept at being an urban hooligan the Montesa was quite brutally uncomfortable to ride in the seated position as obviously enough it was designed to be ridden standing up at low speed off road..

Email ThisBlogThis!Share to TwitterShare to FacebookShare to Pinterest
Labels: montesa

A hearty thank you to David Kenny for sending in this c1920 advert for a Wooler bicycle for publication.

I had never heard that Wooler had any bicycle interests before and this is apparently the only reference to the cycle that David has ever seen. As with many Wooler designs it could well be that it never reached production, or even existed in more than drawing form. John Wooler was an enthusiastic promoter of his designs and was never shy of publicising machines that were only at drawing board stage. I know little about him but it seems that he had a creative mind for two wheel design; many of his designs were mechanically ambitious and expensive to produce and I suppose he derived pleasure from showing the world ideas he had come up with.

I do hope that the Wooler bicycle design was made metal as it is a lovely looking thing. Very characteristically a Wooler with its sliding pillar front and rear suspension. If anyone knows any more of the story of Wooler bicycles please do get in touch.


Posted by Richard Miller at 5:12 PM No comments: