Here's a rarity bicycle-wise. I've only ever heard of one other of these surviving though there are probably a few more hiding about here and there... It's mid thirties Royal Enfield Bullet model cycle. Enfield used the Bullet model name pre-war for their top of the range sports models both for motor and pedal cycles. The Bullet cycle, though not as long lived as its motorcycle brother, continued in production right through from the thirties to the sixties. The twin top tube frame however only featured between 1934 and 1937.

Various bicycle frame builders experimented with small diameter twin tube designs through the thirties and forties, the Enfield frame bears more than a passing resemblance to the Moorson which appeared first in 1926.

Interestingly (or perhaps not depending on your point of view!) the Bullet's top tubes do not appear to be one length of tube going from headstock to rear drop outs. If you look carefully the top tubes appear to be separate from the rear triangle uprights and both are straight lengths butted on to a lug which incorporates the apparent bend on the tubes.

The Enfield Bullet came my way quite recently as a rather sad bare frame. I've got to confess to having taken a perfectly good and original ladies cycle from the thirties to break down and donate parts to building up the Bullet. I felt a bit bad about sacrificing it but in the end I think it went to a good cause....

The current spec is a bit more touring utility than the super sports machine it originally left the factory as. The plan is to slowly accumulate parts to put it back to close to original spec.

Posted by Richard Miller at 9:37 PM No comments:

From the Arabic numerals on the number plate and the palm trees in the background this snap was certainly taken somewhere in the Middle East. The bike is a mid thirties BSA, possibly a Blue Star and given that these were the days of Empire the most likely location is Egypt or Palestine. 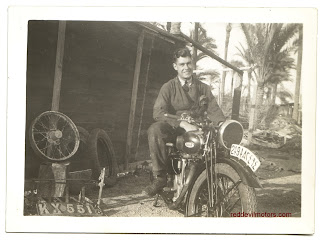 Posted by Richard Miller at 4:13 PM No comments:

Our chap looks very happy with his Sunbeam S8. An occasionally maligned bike due to early teething troubles but a radical and exciting design for the post war brave new world. The Poppe designed Sunbeams went through a long period of disinterest from the wider classic motorcycling community but have enjoyed a surge in popularity of late. Trying one at some point is certainly on my motorcycling 'bucket list'...

Posted by Richard Miller at 4:35 AM No comments:

Yes, the picture is in rather terrible condition but it is of a Zenith Gradua so can be excused... 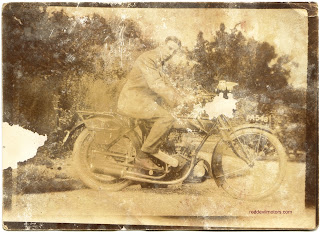 Announced, the dates for one of the very best vintage vehicle events going. Do yourself a favour and go along. Really hoping that my work schedule lets me attend. I love the ride down to Montlhéry but perhaps this time I shall seek an entry and get involved. 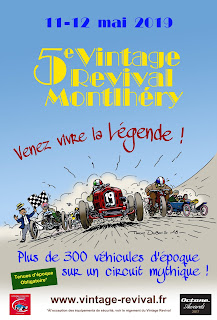 A couple of pictures from the early days of the vintage movement. Taken at least fifty years ago: the 'modern' vehicles in the background are collectors items in their own right today...

I don't know the location but it could just be an early Banbury Run?

Happy news is that both of these machines still exist and happier still is that the Sunbeam is still out and about being used.

Posted by Richard Miller at 4:08 AM 3 comments:

Here's a combo for Zach who recently mailed on the subject of Cleveland motorcycles and said by the by that more sidecar content would be nice. This is the best I can do for now chap but more sidecar stuff will come soon for sure.

The bike is a Sunbeam S8, not easy to identify (at first I thought it was a BSA) but I often run a quick check on the registration number to see if the bike in the picture featured is still around. In this case the answer is yes it is and it dates from 1951 It was re-registered in 2000 and is not currently taxed for the road... Period legshields and voluminous screen to be noted and the chap is well protected in his riding mac. Any vintage lorry nerds out there who can identify the hgv in the background?

Posted by Richard Miller at 4:18 AM No comments:

I dithered for a fair while before coughing up for these Velo Orange mudguards. Why? Well, they are not cheap (though not exactly hugely expensive at around £60 either) and I generally like to use second hand parts on my bicycle projects.

However these 'guards were exactly the right style I was looking for for my Bob Jackson 'Randonneur' / 'Porteur' build so after deciding that nothing else would do I reluctantly put my hand in my pocket.

First thing to say is that I am delighted with the visual result of these mudguards, I was worried that they would be slightly too showy but in fact they set off the rest of the cycle perfectly. They very much are the icing on the cake and yet stand out in their own right too. I have never before had so many compliments about the attractive mudguards on my bicycle! Even to the extend of pedalling past a couple of middle aged ladies and overhearing one exclaim to the other, 'ooh what lovely mudguards', yes really, it did happen!

So, we've established that they look good, now on to the fitting. The 'guards' are available in two different widths. I went for the wider as I'm running 35mm tyres on the Bob J. Partly my fault as the frame is really made for 32mm or less but the clearances on the guards were absolutely minimal. It took a lot of careful setting up to get the lines right and no rubbing on the tyres.

The fitting kit is of good quality but a couple of grumbles here. The instructions state that quality cycles have a threaded hole underneath the fork crown to mount mudguards. I'll call BS on that one, hardly any do. A clip is provided to mount on to the brake hole on the fork crown but there's some bending to do to get it to sit right. Furthermore, and I know I am being petty here, but, the clip should always mount behind the fork crown and the bracket be hidden underneath. The Velo Orange clip is designed to go forward of the crown and looks just a little less neat than it should as a result.

As for the rear mounting...why is there no mudguard bridge provided? Luckily I had one spare but really it should come with the kit..

Otherwise all was good, they are a slightly trickier than usual mudguard to mount and take some time but the end result is well worth it.


Posted by Richard Miller at 4:01 AM No comments:

It's not so often you come across photos from back in the day of mopeds. Perhaps folks just weren't as proud of them or as enthusiastic about them as they were of their motorbikes. So, for me, it was nice to find this snap of a chap with his Norman Lido.

Posted by Richard Miller at 4:00 AM No comments:

The photo looks like it was taken in the sixties and I would say that the bike is an early post war Model 18, probably 1946/ 7 as it still has girder forks. Pre and post war Model 18s are distinguished by the cradle frame of the post war machines. The bike is well cared for, possibly even restored and the owner looks pleased with it: he should be as well - it is a class machine.

The True Spirit of Classic Motorcycling

For me this is pretty much what it is all about, an encapsulation of the enjoyment to be had in running a vintage / classic machine. Riding with friends, keeping old machinery working, seeing places and, most importantly, having fun.

A long weekend point to point checkpoint event circumnavigating Belgium with sub 125cc machines. You may not understand the Flemish text but there are a lot of pictures along with the write up to get the gist of it...