This mini-adventure was long in conception, short on planning and sweet in execution. We had talked about it for a long time, I bought a Himalayan partly with this ride and similar in mind and in the end our preparations amounted to looking at a low res image of the British section of the TET a couple of days before setting off and then checking out some Ordnance Survey maps over a beer or two on the eve of setting off...
So, learn from our mistakes, there are a few tips below.
In many ways I had little idea of what to expect from the British TET, we had three days spare in late July and my green-laning experience is largely limited to lanes around my locality of Dorset and the Fosse Way. I had expected to encounter tracks that would occasionally be challenging, mostly easy going and all would be navigable by car so couldn't be too bad on a bike.
In the end, of the possible interested parties, just Matt and I set off from Dorset at the height of a heatwave and had vague notions of making it up to North Wales. We weren't going to be too fussed about following the TET with complete rigidity, but would follow the rough route taking in as many of the green lane sections in as possible and would be wild camping and self sufficient en-route.
We started off in familiar territory at Tollard Royal and rode up to Win Green to join the Ridgeway droves there and rode through to Salisbury racecourse. After a ride through Salisbury city centre we joined the track North of the city that is off the A360 (just by the camper van centre) that crosses the A303 and goes straight past Stonehenge. Crossing the A303 is frankly quite petrifying at midday in the holiday season but worth it for the magnificent close up view of the stones. We found a shady tree and ate our lunchtime pasty with the stones as backdrop. 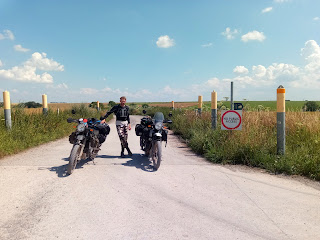 From Stonehenge it's straight on to Salisbury Plain. Easy riding at a Plain-wide limit of 40mph. We didn't quite hit the spot with navigation but didn't do too badly. 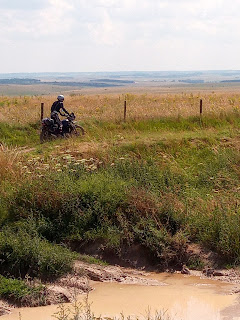 On the Plain we found a fun little tank training area that we played in for a short time. After a couple of minor spills it was time to move on before it all went South on day one....
From Salisbury Plain we crossed the downs at Pewsey Down by road and joined another lane just North of West Kennet Long Barrow. Here the lanes changed somewhat from what I was used to and became significantly narrower and more overgrown. Granted we were riding at the peak of foliage growth but all the same there wasn't a whole load of space to ride a bike without getting constantly whipped by undergrowth. 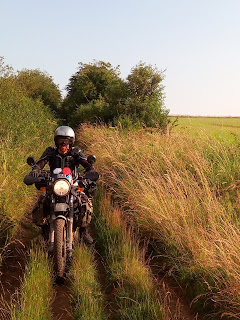 After riding a number of North Wiltshire / Cotswold lanes (some of them more appeared to be footpaths) we hit the tarmac for a while to head to the Forrest of Dean where we reasoned that there would be good camping opportunities. We weren't 100% correct in that assumption as we had to prowl around for a good while to find a spot that was quiet and unobtrusive but in the end landed a peach next to a deserted barn and with a cracking view. 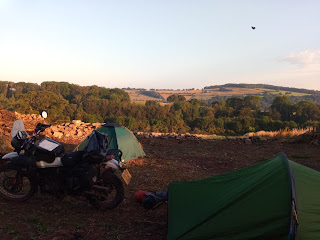 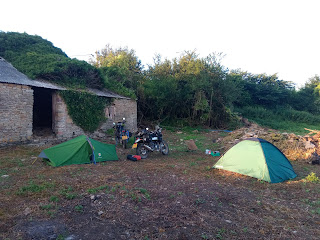 The Himalayans acquitted themselves pretty well on day 1, taking everything in their stride. For sure a lighter more off-road oriented bike would have been significantly easier for a few of the lanes but we were carrying full camping and cooking equipment: personally I wouldn't have carried much more if I had been away for three months as opposed to three days. More dedicated off road tyres might have helped but then again the road sections would have been less enjoyable. We covered around 150 miles in the day with about half of them being off road. Hard work in the heat.
Main learning from today was that there is a fairly decent TET app for Android (we downloaded it towards the end of the day). It makes route finding a lot easier but is not 100% - but don't forget it's all free and all set up by volunteers. Very sensible would be to set up a phone holder and charger on your handlebars and use the app to follow the route.
We were surprised by how few fellow travellers we encountered on the TET, we had expected it to be almost busy but we only saw four other motorcyclists in the day and they were on day rides with no luggage.
The reception we got from walkers, cyclists and horse riders was good, both Himalayans are on standard silencers and are unobtrusive, that combined with steady and considerate riding, open face helmets and a cheery greeting goes a long way.
Finally, brush guards - these are essential. We did a lot of plowing through brambles. Don't even think of riding some of the trails without eye protection...
Posted by Richard Miller at 10:14 PM No comments:

A fantastic day of vintage motorcycling today with big thanks to the Dorset Section of the VMCC. Coming at the end of a heatwave rain was threatened but the weather for the ride remained fine. A great turn out of girder forked machines from across the country came along and a gentle ride in the company of gentle folk around the scenic lanes of North Dorset ensued with the obligatory stop to say hello to that chalk fellow with the large todger, after whom the run is named.

Below nothing more than a series of snaps of some of the wonderful machinery present...

As any enthusiast for vintage bicycles, motorcycles and cars will tell you, a Wolverhampton made Sunbeam is an extremely finely made machine. The design, manufacture and quality of finish is second to none.

Sunbeam bicycles were top end machines in price and quality and the top sporting model was known as the 'R.R.' aka Road Racer. It featured in the catalogue from early days up until 1934. The second model of the RR was introduced in 1928 when the design became a true lightweight in the more modern sense rather than the previous path racer styled machine.

The RR was well thought of enough to have been used in the 1928 Olympics held in the Netherlands by British team member Jack Middleton.

The example in these photos is thought to date from 1932 and is in wonderful original condition.

A real obscurity here. The brochure for the Kyffin Sapphire range of Villiers powered off-road machines.

Roger Kyffin had a shop up in Cheshire and was a prominent scrambles rider. He made several specials based around DOT frames with Triumph or BSA engines and then from 1963 to 1966 produced the 250 Moto-Cross and the Red Rose Trials with Villiers 250 engines. All of his machines were known as Sapphires.