Frankly this is as much of a recommendation as a review. I just recently got my sticky paws on a copy of Michael Edwards' The Tricycle Book and as it says on the tin the book covers early motor tricycles from 1895 to 1902. This volume covers French machines only, there is a part two on the way on the subject of British made tricycles and I am genuinely very much looking forward to it.

The Tricycle Book definitely falls into the 'boutique book' category and at GBP 80 plus postage represents a considerable outlay. However once you have seen it you have to concede that it is good value, the format is large and the publication luxurious. There are 364 pages and the book is very well illustrated mainly with photographs from the period. That Mr Edwards has managed to find quite so many early images is admirable, the majority of which are completely fresh to my eyes (and I do spend possibly more time than is healthy nerding away at early vehicles...)

Without doubt an authoritative work on the subject The Tricycle Book should be of interest to anyone with more than a passing interest in early vehicles. The righteous thing to do as ever is to buy direct from the author: https://surrendenpress.co.uk/the-tricycle-book-1896-1902 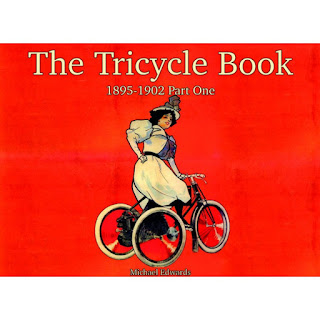 Tandon motorcycles were the enterprise of a certain Devdutt Tandon and the first model, the Milemaster, was envisaged as a cheap rugged runabout for export to developing nations, particularly Devdutt's native India.

Like much in life Mr Tandon's export vision did not go to plan so he began to concentrate on machines for the home market of which the Superglid (yes, correct spelling) was the first. The Superglid was introduced in 1949 and was noteworthy amongst lightweights of the time for having rear suspension. The Superglid's rear suspension was of rather novel design and gave the machine a very distinctive profile. Rubber bands situated under the gearbox pulled by a bell crank connected to the swinging arm provided the suspension, rebound damping was controlled by a rubber block.

The Superglid's rear suspension borrowed from contemporary Italian designs but was unique amongst British machinery and in several respects ahead of its time. Tandons were never more than utility machines and the Superglid's Villiers 122cc engine was certainly not one to set the pulse racing but nowadays they stand out for their rarity and quirky design.

Posted by Richard Miller at 5:04 PM No comments:

A bit battered but I thought it might be interesting to reproduce this leaflet. It came in the box of a new old stock Lucas cycle light and is self explanatory. 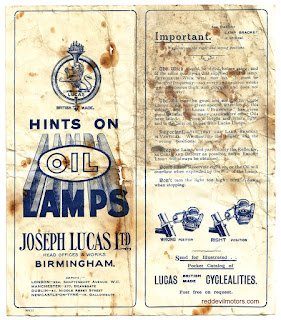 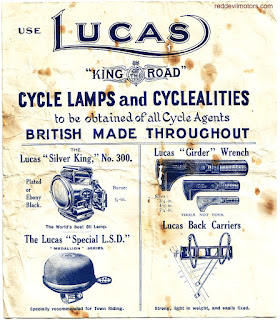 Posted by Richard Miller at 2:40 PM No comments:

I picked up a set of chrome petrol tank trims for my BSA Bantam D1 a while back but didn't get round to fitting them. Now with all the tender care that the Bantam has been receiving of late the time seemed right to take them off the shelf and put them on the bike.

These tank trims are original catalogue spec parts on many BSA Bantam model years. I couldn't tell you the exact years, suffice to say that they fitted them for a fair while. Nowadays they are extremely rare and it is unusual to see them fitted to a bike. Having fitted them I can understand why this is and if I had the bike as a ride to work machine back in the day I would have certainly discarded them and thrown them in the bin.

The trims are the devil's very own parts to fit. Granted, these examples are around sixty years old and not in perfect shape but it took me a good hour to persuade them on. A job only achieved with several skinned knuckles, I must apologise to the neighbours if my workshop is not soundproofed enough to mask the profanities I uttered in the process. I guess if you were a mechanic dealing with them on a regular basis you would probably find an easy fitting technique but then again you would more than likely also try to persuade the owner to let you throw them away.

Back in the day when it was necessary to de-coke your two stroke on a regular basis these trims must have been highly burdensome. I do however really like their look and hope that now the bike is re-wired and the engine rebuilt I shall not be taking the petrol tank off for a good while. Famous last words.... 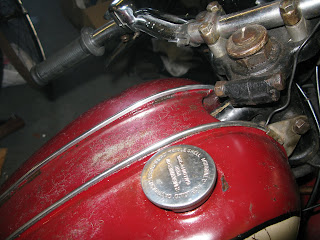 Posted by Richard Miller at 12:35 PM No comments:

A small collection of images from an early post war grass track meet. This was how motorcycle sport got back on its feet following WWII. Cheap racing in fields on converted road bikes. Even so, it drew in the crowds. Sadly I have no idea of date or location, if anyone has an inkling of either then please get in touch. 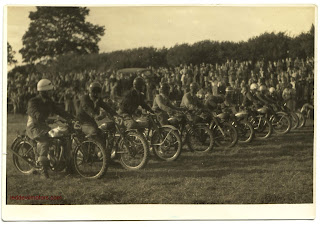 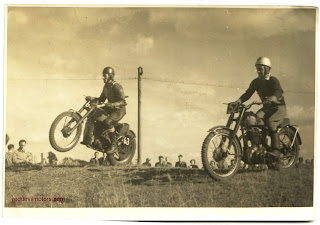 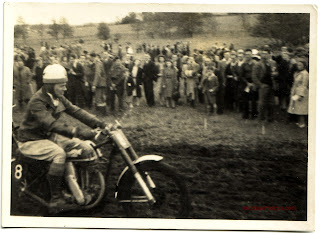 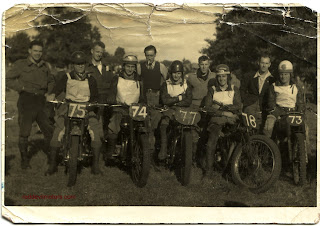 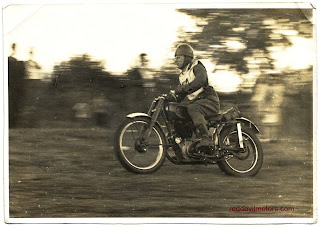 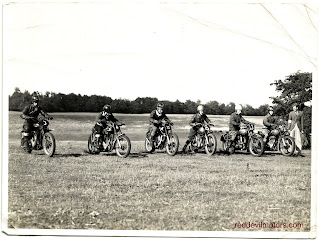 Recently I got hold of the photo album of a moto enthusiast who was stationed in Kenya back in the early post war era. I'll post up snippets from it over the next while. First up this page contains images of the protagonist with his '43 ex-WD Ariel in the Gilgil and Naivasha area.

Gilgil is a town in Kenya halfway between Nakuru and Naivasha and became infamous as one of the hubs of the 'Happy Valley set' of high living colonial aristocrats. 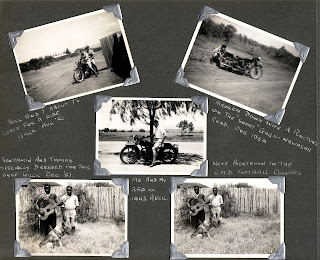 Getting ready for the Pioneer Run

A lot of icy and snowy weather of late but it has warmed up the last few days and a few heavy downpours of rain have washed the salt away from the roads. Today it seemed like a good idea to take the 1914 Sun out for a quick shake down ride.

At the moment the device is a bit of a pig to start and won't do much without some easystart (ether spray) and a plug clean. Once warm though it only takes a short paddle off to get it going, which is just as well when there is no clutch.

The good news on the short ten mile run was that the bike was basically sound, no problems at all from the motor just a few things to tighten up - a saddle that moved when you hit a sharp bump, loose head bearings and a carb that blew off its flange when the bike backfired. Easy fixes and nothing to stress about.

When warmed up the little Sun purrs along nicely. It takes a while to get used to the clutchless crash gearbox but the ratios are ideal, at a guess cruising speed is somewhere around 25mph, the motor is nice and flexible and takes inclines in its stride. Brakes are predictably feeble but overall it is a very simple bike to ride. Once the air and mag levers are set up pretty much all you need to do is to operate the throttle. The skill comes in timing junctions so that you don't have to come to a stop and then re-start the engine.

So now, some fettling to be done, more test rides and then Epsom Downs here we come...

The nostalgia trip that is my D1 Bantam (passed my test on it when I was 17 and still have it nearly 30 years later..) went out for a test ride today to showcase a few improvements.

I've finally gotten around to properly re-wiring it following the fitment of the Electrexworld alternator and CDI ignition system. All seems good there and the bike holds charge on full beam so no problem. I changed to LED bulbs on the brake light whilst I was in the fettling mood as it regularly blew the old style ones that were there before. I decided to keep it on 6 volts though as I am too mean to fork out for a new battery and bulbs!

Having started to use the bike I again I proved the old adage of 'nostalgia, it's not what it used to be' as I discovered the Bantam to be somewhat tedious to ride with little power and gear ratios way too widely spaced. I'm sure the extra pounds I carry now over 17 year old me are not helping either.

Back when I was using the bike first time around I tried out a 'big bore kit' - ie I fitted the barrel and piston from a 150cc D3 model. Alas inexperienced 17 year old me did not change the jetting at the same time and I soon seized it up. Just recently I dug the barrel out of the spares box, sourced a new piston and a suitable D3 carb. The barrel was treated to a quick hone and on it all went.

The results are very satisfactory, the little bit extra power is enough to overcome the wring the neck out of it in second, try third, get bogged down, back to second, wring it again and repeat nature of the 125cc experience when it hit a slight incline.

So, workshop time well spent though obviously it is still no road burner. And despite the extra thirty years of experience I still managed to nip it up again on a long hill as I got carried away with the mighty power of those extra 25 ceecees. It might just be that the Tod head fitted makes it run a bit hotter so perhaps I should revert to standard for a little while. Must now remember to run it in carefully....


Posted by Richard Miller at 8:54 PM No comments:

Here a photo of a vintage combo on a very evocative cobbled street of terraced houses.

The definition on the picture is poor but if I was pushed to give an identification I would go for a NUT (Newcastle Upon Tyne) from the early twenties. If anyone out there can give a positive id please do get in touch.