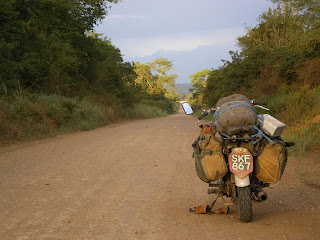 Posted by Richard Miller at 7:10 PM No comments:

Photos of a very lovely Zenith Gradua twin and wicker sidecar from the veteran era. The rider apparently the same in each one but the lady passenger different!

addition: Thanks to the anonymous comment dating the bike as 1912 and also naming the sidecar as possibly being a Mills-Fullford. 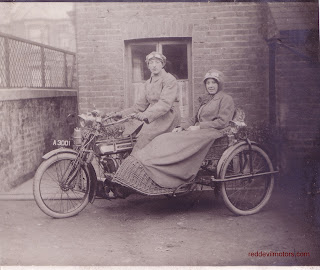 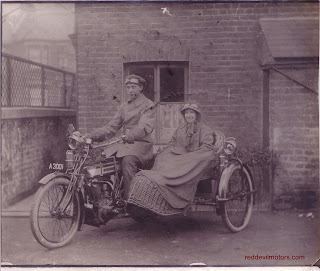 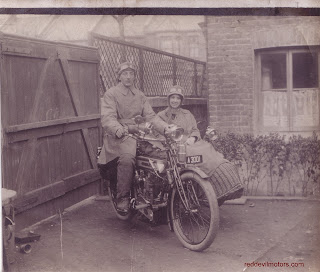 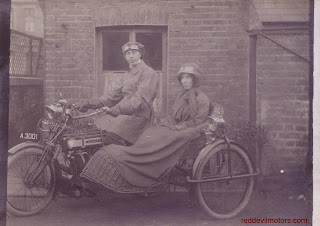 A very Merry Christmas to all. 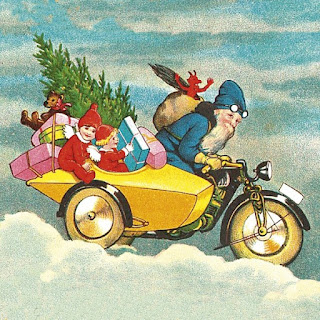 Behold! Velocette's range for 1958. Bodywork was in vogue at the time and Hall Green tried to jump on the bandwagon with some slightly cumbersome engine fairings.

Posted by Richard Miller at 12:47 PM No comments:

Recently a Kenilworth scooter sans petrol tank wondered in to my garage and took up residence. Strangely I had seen a Kenilworth tank on offer at the Great Dorset Steam Fair just a couple of months before and I rued that I did not give in to my hunter gatherer urges felt towards that particular tank. After all it was a very nice tank in very nice condition. I didn't even kid myself that it would come in useful one day, it just seemed like something that you wouldn't see again and might make a pleasant enough ornament. After acquiring the tankless Kenilworth I felt that somehow the gods were playing with me and I was destined never to see the Steam Fair tank again.

And so it was: that particular Kenilworth petrol tank has vanished forever from my life, just a fleeting memory. However in its place, another Kenilworth tank. A very nice gentleman got in touch with me via the previous keeper of the Kenilworth and offered me the below tank for a very reasonable sum. Times like this give you some faith in humanity as I was clearly without Kenilworth tank and dearly in need of same.

Thus the previously incomplete, collect the missing bits, long term project is now fairly complete and has joined the queue of do-able projects vying for attention in my garage. Now if anyone has a spare rear wheel or just rim I would truly believe that miracles do happen.... 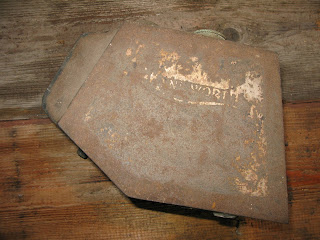 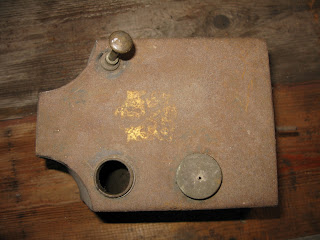 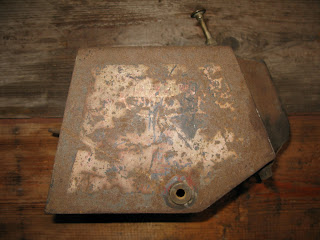 The Mk IV was the final iteration of the Corgi scooter. Surprisingly a fair bit of effort was made in improvements over the previous versions. A stronger square tube frame, front suspension, a two speed gearbox and legshield were the main alterations. Despite this the main issue was that the Corgi was woefully primitive compared to the offerings from Italy and Brockhouse's Corgi struggled on in production until 1954. These late Mk IVs are now fairly rare and were also available in polychromatic blue and bronze in addition to the traditional black with burgundy tank. A good number were exported to the States and sold as Indian Papooses. A slightly undignified offering for the once great Indian brand. Don't ever confuse Corgi's with the military Welbike, Corgi's were never used by the military as parabikes despite some folks' penchant for restoring them in military drab...

Unusually this brochure has the spec sheet translated in to both French and Spanish.


Posted by Richard Miller at 10:53 AM No comments:

The Wonder Book of Soldiers 1939

Where this book came from I cannot remember. I think I have had it since childhood, it was quite old even back then! The Wonder Book of Soldiers is a flagrant piece of war-time propaganda and was published right at the beginning of the War in 1939 when there was still the resource to print large books. The book is full of optimism for a short and triumphant war from the time before the evacuation of Dunkirk. Many of the copious images from the book were taken during exercises in the twenties and thirties. Below are scans of the two wheeler related pics. 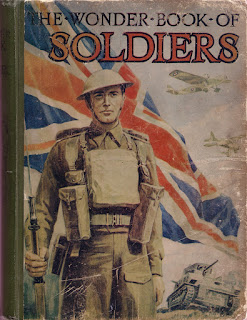 As a motorcyclist living in the Soviet Union you may not have had a huge variety of bikes to choose from but at least they came in nice colours and were promoted with shiny brochures (for consumption in the West at least). What's more is that during the fifties a Jawa was a match for any machine of similar capacity from Britain, it was only through the later sixties and seventies that Eastern Bloc designs began to stagnate. Styling of the Jawa was spot on trend (Edward Turner even 'borrowed' the Jawa headlamp nacelle design for his postwar Speed Twin) and the bikes were a model of rugged, reliable simplicity combined with decent performance. Alas though, even with all they had to commend them, Jawas never sold in great numbers in the UK in the fifties.

Starting somewhere around 1998 I imported old bikes from India to the UK and did this for around four years. Most of the bikes were pre-war or ex-WD and some were in fine condition and some terrible: there were a surprising number of Welbikes amongst them. I found these photos whilst going through an old album. There was another Welbike I had that had been converted in to a bicycle as well that alas I don't have a snap of. I'm not entirely sure how so many ended up in India bit it seems like they were used as runarounds at large bases and probably continued to be used by the Indian Army too for a while too after the British left. There were both MkI and MkII variants, several had been neatly modified with a fabricated centre stand.

I think most of these below have been restored by now. You might imagine that another eight of them would satisfy demand but they have surged and surged in popularity to the extent that several batches of replicas have been made. At least one of these ones was used as a pattern for replicas.

If you aren't familiar with the Welbike there's a very brief history here.

A bit off subject for this blog's normal content, but hey there aren't any rules and isn't it great? Spotted this Russian UAZ 452 van in my local supermarket car park, it's on Russian plates so I guess was driven over. Apparently you can still buy these new.

Posted by Richard Miller at 11:51 AM No comments:

Charming photo. Bike is, I believe, as per post title.

Posted by Richard Miller at 11:55 AM No comments:

I hadn't made the trek up to Kempton Park for a couple of years so with a free Saturday it seemed like a good idea to drive up and have a mooch around. Normally I've gotten up at the crack of dawn and got in there early. This time it seemed like a plan to be a bit more civilised and aim to leave eight-ish to get in ten-ish. Mistake. I got snarled up in London bound traffic, then the main car park was full and I had to go to the overflow which was a further 15 minute queue down the road and then even arriving late there was still a massive half hour queue to get in. Grumble. Lesson learnt....

Anyway, once in it was the same good old Kempton. Perhaps a bit more general market stall tat on offer than the last time I was there but still a good and big autojumble. The Off Road Show adds a nice extra dimension to it all too. Must make an effort to visit more often. Here's a few snaps of bikes from the jumble and show. 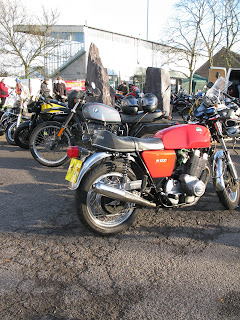