The VMCC Somerset Section's biannual auotjumble at the Shepton Mallet showground is always a good day out, as much a social occasion to catch up with old friends as to pick up parts for ongoing or future projects.

Stall numbers were slightly down on pre-covid times, understandable as the event only got the go ahead at late notice. Personally I picked up a handful of nice parts, a couple I needed and a couple I didn't but was slightly disappointed by the array of complete machines on sale. Maybe that's because I went with the hope that I would find a bargain veteran that I could ride home on, one can live in hope...

Below a few pics from the day.


Posted by Richard Miller at 10:24 PM No comments:

Some pics and a brief write up of last weekends' ride up to the Dragon Rally in Snowdonia. If you can't be bothered to read on and just want to look at pictures, here's a quick summary: it was very wet.

In the run up to the weekend I had been considering getting my Velocette ready for the ride but in the end (and fortuitously as it turned out) lethargy prevailed and I took the easy option with the Enfield Himalayan.

I got on the road just after nine, heading up to Rhayader to meet Matt and Gary for lunch. Normally mid-Wales would be an overnight hotel stop to break the journey however this year we had a more ambitious plan to take in the Bruce Pollard Memorial Rally near Betws-y-Coed on the Friday Night.

A fly by from Matt and Gary with Matt's faithful Beesa
A10 combo.

The journey on from Rhayader was marked by cold and wet weather (we hadn't expected much different though had dared to hope to stay dry) along with fantastic scenery. By the time we arrived in Snowdonia we were well and truly finished with riding for the day. A stop for food in Blaenau Ffestiniog revealed that we had another hour to go, that was somewhat dispiriting!

We arrived at the Bruce Pollard site east of Betws-y-Coed a good while after dark and seemed to be the very last to arrive (apart from Phil who turned up significantly later!) A really nice friendly rally with a warm pub to relax in (though I was was worn out from the ride up and retired to my tent early). Some vicious winds and rain overnight but we all survived and were revived by a fry-up in the pub.

To know who Bruce Pollard was take a look at this article.

We were about the last to leave the Bruce Pollard when we headed off for Conwy to the Conwy MCC clubhouse at the base of Conwy Castle for the Dragon Rally check in. Always a great atmosphere there and the weather was clearing up nicely. There we met up with Dan and Wendy with Dan's Ural M72 combo. At this point Dan memorably declared that it looked like the rain was over for the day.

Having checked in, off we headed for the rally site... Soon after leaving Conwy the rain started and as we approached Betws-y-Coed we began to see rather a lot of bikes heading in the opposite direction, many of them familiar faces from the Bruce Pollard and wearing check in stickers. None-the-less we continued, as we gained altitude so the weather became yet more inclement and by the time we got to Capel Curig the rain was coming down in the proverbial sheets. As we crossed the pass to the rally site at Llyn Gwynant conditions were almost comically awful with streams running across the road and winds blowing us off course.

Many brave souls stayed but the prospect of putting up already wet tents in a bog with high winds, rain and worse weather forecast to come with no real shelter to be had we wimped out and made the decision to head back to our respective homes.

It was a bit of a downer to leave but the perceived misery of staying seemed so much the greater and the decision was unanimous. No grumbles though, it's a winter rally and if you set off to camp in the middle of February in the mountains you've got to expect inclement weather and harsh conditions. You make your choice and either put up with it or head home. And this time head home was what we did. With darkness approaching and a long solo ride in the rain ahead of me I took the decision not to ride back down through the twisty roads of Wales but to head out to England on the A5 and sit on the motorway for the journey. The Himalayan behaved itself perfectly on the motorways despite being out of its element and we made it home in around six hours.

Put off? No! Disappointed? Slightly. But in the end a fabulous weekend of riding was had in the company of good friends plus one winter rally was successfully attended. So, all in, not too shabby at all. Hopefully back to the Dragon again next year or the year after and wouldn't it be wonderful to have some good old fashioned ice and snow.

A little video clip of the conditions at Llyn Gwynant.
The site is in the mountains at the top end of a lake.
Wind was whistling up between the mountains and
blowing waves up the lake towards the campsite.
Proper challenging conditions. Video taken from the
shelter of the toilet block and cooking area.
Posted by Richard Miller at 5:48 PM 1 comment:

That Japan has a vibrant custom scene is old news. What is less reported is how dedicated the guys involved are and how much they actually live the life and ride their bikes. My job has taken me to Japan quite a lot recently and I snapped pics of this Sportster-based chop at a service station on the road from Yokohama to Shimizu.

It was the middle of winter, quite cold, and the bike looks like a daily rider. Maybe it had a starting issue but impressively the owner left it running while going to in to have a pee or get a coffee, perhaps both. How many countries can you just leave a running bike like this unattended and not worry about it? 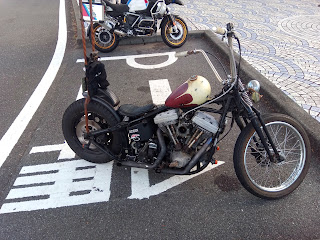 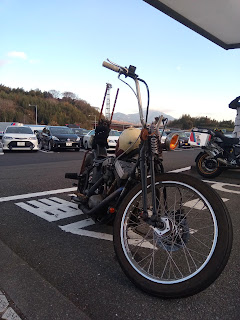 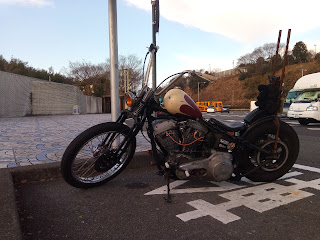