A beautiful summer evening. Hundreds of bikes gathered by the seaside.

An informal meet on Poole Quay every Tuesday evening in summer that has become something of a local institution. Motorcycles of all shapes and sizes, plenty of weekend pose machines, a few daily ride scruffs hanging around, the odd scooter and a smattering of classic machiney. All that and fish and chips too..

Here's a few pics from earlier this week.

Posted by Richard Miller at 9:44 PM No comments:

A couple of years back I bought a Watsonian Avon super sports sidecar. The owner had used it fixed up to a Vincent. It's beautifully made sidecar with a lovely period feel to it down to the wooden dashboard and glove box. The owner had the original brochure, he wanted to keep it for sentimental reasons but lent it to me to make a copy. Now having two children the Avon doesn't suit my needs and will hopefully find a new owner shortly. Having gone to the effort of scanning the brochure I thought it would be worth posting it up for other enthusiasts. It's a nice glimpse of times past and shows just what a variety of chairs were available to fit to your bike in the fifties when they were still seen as a regular form of family transport. There're not many survivors of any of these models. If anyone has a spare Maxstoke two seater available let me know! Click on the individual images to see as a larger size...

This Bullet joined the stable a few months back and featured in the post on riding along the Dorset Ridgeway. As purchased a good deal of money had already been spent on the bike with parts from the Hitchcocks catalogue and it was in street scrambler trim. The intention of the acquisition was to convert it to long distance trials trim and a frantic fortnight of preparation for the MCC Lands End Trial gave the results pictured below.

Unfortunately due to family commitments I had to be a no starter in the trial but I'm pleased with the modifications to the bike and with a little more development it will more than match my ability.

I knew that I would have to add lights and re-wire the bike but as with all projects there was a lot more to do than expected once things started to come apart.

First item on the improvement list was the gearbox. I had bought a wide ratio gear conversion set from Hitchcocks. The primary cover came off and apart came the clutch. It's easy enough to rebuild a Bullet gearbox in-situ and putting it back together is straightforward. The box received new bearings and seals whilst it was apart and the two cogs that comprise the wide ratio kit pressed on to the layshaft and mainshaft without too much bother. The secondary drive needed lowering too so on went a new gearbox sprocket, then of course the chain wouldn't mesh so on went a good second hand chain. The cush rubbers needed replacing so with the wheel off and the rear sprocket and drum free running the bearings felt rough. It came apart and the bearing was found to be seized and turning in it's housing, that meant a new bearing and sprocket....

With the drive train sorted it was time to look at the suspension. The plan was to have the bike looking like a fifties ISDT machine. A pair of shrouded shockers went on the back. The front suspension felt harsh so it came apart and the springs were found to be a couple of inches too short so in went a set of Hitchcock's progressive springs and new seals. A set of headlamp brackets again from Hitchcock's went on at the same time as did a pair of fork shrouds. These were complemented by a cheap repro Lucas SSU 700 type seven inch headlamp. To complete the look up front a repro Smiths chronometric speedo was fitted.

Other cosmetic changes were to fit a fifties style flat type toolbox which was a cheap ebay purchase and is probably repro. The alloy tank had way too small a capacity and I had a fifties trials one kicking around so that went on and in my eyes looks just right. A fifties battery carrier and a rubber type battery case hiding a modern gel battery furthers the look and the final minor mod was to fit a fifties tappet cover.

The wiring was kept as simple as possible. Old fashioned Bullet connectors and cloth loom tape. An old aluminium computer rack panel was cut to shape to form a plate under the saddle which carries the powerbox and ignition key.

Next step of course is to use it in anger. I'm very pleased with the overall result and a minimum amount of money had to be spent to get there. My involvement with a number of Bullets over the years means that there is a useful pile of spares at home waiting to be dipped in to.

There's certainly going to be a fair bit of development still to be done. It's a very nice ride on the road but awaits a canter on the rough. In the pipeline is a spare 500cc motor lying under the bench and a '61 all welded frame that it could all be transplanted into... 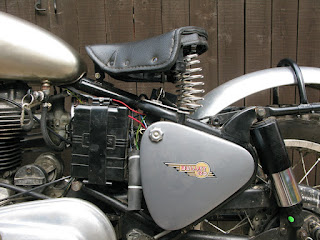 Posted by Richard Miller at 12:54 AM No comments:

There's something about loading up the bike, setting off with ferry ticket in your pocket and heading off to an event in mainland Europe that's special and exciting. The different scenery, the cafe stops and getting there a whole load of fresh and new bikes and characters. Taking the back roads is definitely the way to go and investment in more time for the journey gives great returns.

Most years I search on-line for a Europe-wide list of what is happening where to plan the annual summer pilgrimage. I haven't found the information yet; anything comprehensive would be massive and there must be hundreds of small club events well worth attending but given the lack of anything else here's a compiled list of events myself or friends have attended and been worthwhile or ones that I've heard good things about.

As a disclaimer, don't rely on this information 100%. Check with the organisers before making plans for dates, ticketing and cancellations. And if you know of a good event, let me know and I'll try to update the list year by year...

26 & 27 May. Dijon, France. Coupes Moto Legendes - The big one. Massive and mildly anarchic. Every classic motorcycle enthusiast should go at least once.

3 June. Boulogne, France. Boulogne Bicycle Rally – organised by the Vintage Sports Car Club, looks like a lot of fun and I can't find any details on-line.

23 June. Montlhery, France. Terrot Club of Balancourt – Journee de la moto ancienne – antique bike day. Pre-65 motorcycles. Any event at Montlhery is a treat. Should be good. There are opportunities to go around the track.

7 & 8 July. Bardonecchia, Italy. Stella Alpina Rally. A meeting for all motorcycles in the Italian Alpine town of Bardonecchia with a Sunday morning ride up the Colle del Sommeiller

14, 15 & 16 September. Angoulême, France. Circuit des Remparts D’Angoulême - a four wheel only event which has great reviews and would make a fantastic destination for a vintage road trip.

Posted by Richard Miller at 12:55 AM No comments: