I'm lucky enough to be the custodian of several old motorcycles and this 1927 Triumph is a firm favourite. Bought some eleven years ago at auction, it started up willingly in the car park after I had paid up for it, and has been a reliable friend since.

The '27 Triumph really is one of the easiest flat tank bikes to live with, performance is fair and parts are available. It has that wonderful twenties long and spindly look but is combined with the advances of the latter part of the decade - wired on tyres and decent brakes. My example has been slightly blighted with a tendency to nip up when pushed along, I've always felt that more should be available from it and that it should have the ability to get thrashed a bit harder and take it. 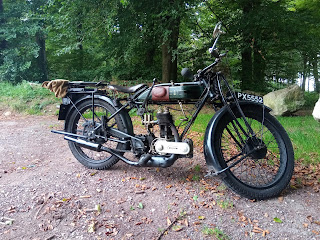 So, some much needed care and attention for the Model N. The plan of action was to take the top end off and check for any possible air leaks, check the ring gap, lap the valves and give it a hone and hope that this multi-pronged approach would sort it out.
The first problem that sprung to light on disassembly was that the seals on the valve cap 'fir cones' were poor and possibly air was getting in. This would have to be sorted on re-assembly. Off came the exhaust and carb and next the barrel itself. Clearance was a lot tighter and the job was considerably fiddlier than I had expected for a bike that would have had to come apart regularly back in the day to de-coke and grind in the valves.
The ring gaps were already very generous, so no problems there. The valves were not seating nicely so out came the grinding paste and lapping tool. The bore was ever so slightly glazed so I got busy with the honing tool (just an attachment for my power drill). Whilst everything was apart the barrel and exhaust got the wire brush treatment followed by a couple of coats of high temp satin black paint. 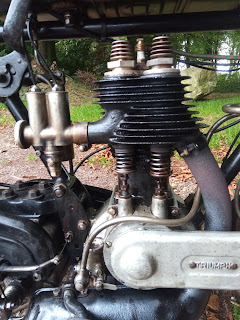 Everything went back together the same way it came apart, the barrel was equally fiddly to get on as it was to get off. Just half an inch of extra clearance and it would be a cinch... Test ride time and it started and ran fine. Out on the road we took it steady to start with and progressively opened up more and more and all remained good with no sign of tightening up. Can't really say what was the single cause of the problem, perhaps it was multitudinous. So, ready for next season to ride with confidence in unleashing all those Triumph horses. 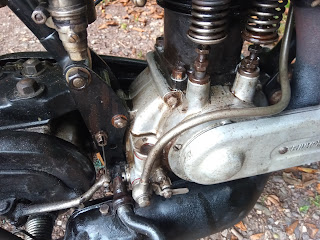 Posted by Richard Miller at 10:16 PM No comments:

It's not often you come across an old picture of a DOT motorcycle, particularly one from the vintage era. This particular 'Devoid of Trouble' DOT is from 1928 / 1929 and is fitted with a 348cc 'dog-eared' ohv JAP engine, it's a high end sporting mount of the period.

Posted by Richard Miller at 7:50 PM No comments:

Here's the range of DMW (Dawson's Motor Works) machines for 1954. Leslie 'Smokey' Dawson was a well known pre-war grass track rider. When the War started he was ineligible for service in the armed forces due to his grass track riding injuries, instead he became an RAF mechanics instructor and despatch rider. Later on in the War he opened up a small garage in Wolverhampton - Dawson's Motor Works.

Smokey Dawson is in some places credited with patenting several important developments in motorcycle development (swinging arm suspension, telescopic forks and double sided front brakes). This is indeed true but it is perhaps more fair to say that he patented minor modifications to existing technology that allowed him to produce such parts without infringing existing patents. None-the-less he was certainly an innovator and one who embraced moves forward in technology.

DMW machines for the large part used Villiers engines and were of high quality with some unusual features, some models had semi-monocoque frames and many were fitted with earles forks. For a while I owned a DMW Cortina and a fine machine it was too.

The 1954 range is interesting in that this is the year that DMW listed machines fitted with French built AMC engines (a different company from the British concern Associated Motor Cycles). The French AMC motors were fitted with ohc engines (DOHC in the case of the racing model) and looked quite glamorous and exciting. Sadly it appears that these machines only reached prototype stage, they were exhibited at motor shows but seemingly did not roll off the production line.

There's a good history of DMW at the historywebsite.co.uk 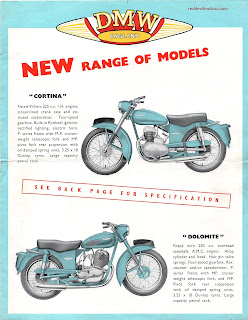 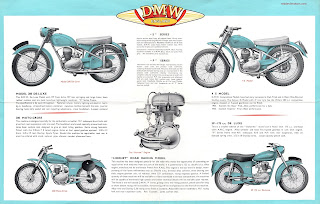 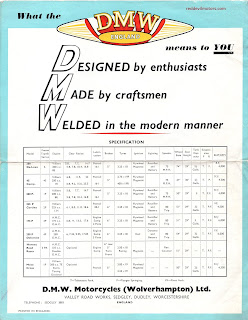 The second instalment of snaps from the National Cycle Museum at Llandrindod Wells. Not much extra to add from the first instalment except apologies once again for the slightly dodgy smartphone quality snaps and to re-iterate the recommendation to visit both the town of Llandrindod and the Museum.


Posted by Richard Miller at 3:30 PM No comments:

A charming picture featuring a Motosacoche from the veteran era.

Motosacoche were a Swiss firm that started off in 1899 making bicycle attachments. The name literally means 'motor in a case' as the engine units were packaged within an enclosed triangular subframe that would bolt into a bicycle's main triangle.

The machine pictured here is a Model A that was made from 1901 up to 1910. Motosacoche went on to produce a large range of conventional motorcycles and MAG proprietory engines. Interestingly Motosacoche were paired up with Royal Enfield in the early days - they provided an IOE v-twin engine to Royal Enfield when they recommenced motorcycle production in 1910. Royal Enfield produced the cycle parts and sold it in the UK under the RE brand, Motosacoche produced a machine in turn that was near identical to the Royal Enfield and sold under their own brand name through Europe.

It's quite hard to come up with a back story to the photo. It is certainly very posed. The bell tent seems quite incongruous with the backdrop of what appears to be a windowless high sided wooden building with a corrugated iron roof.

Posted by Richard Miller at 4:44 AM 3 comments:

This has got to date from the mid to late eighties. Obviously I believed I was the business on this bike! Reality as we can see perhaps tells a different story. Still, that is what motorcycles are about isn't it? A fantasy. In this case the Triumph had all sorts of whiffs of James Dean, the Fonz, The Wild One, etc, etc.

Of course the 3TA, aka Model 21 was the baby bro of all the big glamour Triumphs but it still had the look. It was bought from a local very biker-ish kind of guy, the price was low and it totally showed in the bike. In truth it was remarkable that it ran and kept on running. The front brake was negligable, the rear locked up at the faintest hint of pedal, the handling was poor and the engine occasionally let out a blood curdling squeal on the overun. It did however sound magnificent and look amazing to a seventeen year old and I loved it.

Posted by Richard Miller at 5:37 AM No comments:

Email ThisBlogThis!Share to TwitterShare to FacebookShare to Pinterest
Labels: triumph

The 'Big Port' AJS is one of the classic vintage motorcycles. Named Big Port because of the large diameter of its exhaust the 350cc version was hugely successful in competition and was commoner than the 500 back in the day as now.

The 500cc Big Port (official model name G8) was never so succesful on the track and, though sold as a sporting model, was obviously less focussed that the 350. The G8 wore touring mudguards whilst the 350cc 'H6' carried skimpy little numbers.

Postscript: Thanks to Geert de Boer from Netherlands for pointing out that really it was only the 350 that was commonly called the 'Big Port' back in the day, the 500 wasn't popularly known as such. It also seems that I have got in a muddle over AJS model numbers - G prefix models were from 1926 and H from 1927, the 6 suffix bikes were the 350ohv and 8 suffix 500ohv. The particular bike in the photo above is a H8 from 1927 - 1927 being the first year in which the model was fitted with wired-on tyres.

Many thanks Geert for putting the record straight, when these things are out in the public domain and used as reference it is always nice to get the details fully correct.

Posted by Richard Miller at 4:50 AM No comments:

Another veteran machine that I'm struggling to identify. It looks to be around 1912 or 1913, at first I thought Premier but it doesn't quite look right. Right click, open in new window and then enlarge to get the full sized image.

The motor is distinctive for having the magneto behind the engine rather than in front, forks are Druid type, other than that there are few easily identifying features. Do message or mail if you can put an id on the bike.

Some nice details in the picture though from the chap's serious riding gear to the three front headlights. There's some kind of long plunger / pump down at the front of the engine - no idea at all what that is for. On the handlebars are a mirror on the left side and a neat little cylindrical leather case on the right that seems a bit too small for a spare belt or tube.

Posted by Richard Miller at 4:14 AM No comments:

Of course normally this blog deals with two and occasionally three wheelers but this Skoda Octavia spotted recently in Beaulieu village is too sweet and unusual to miss out.

Skoda / Volkswagen have trundled out the Octavia model name multiple times such was the success of the original which was produced from 1959 to 71 in huge quantities. This particular example is a two door which ran from '59 to '64. It's a very rare sight in the UK, particularly in this condition.

Whoever owns this lovely piece of Eastern Bloc history bravo to you to keeping it out on the roads and thanks for the pleasure of seeing it out and about. 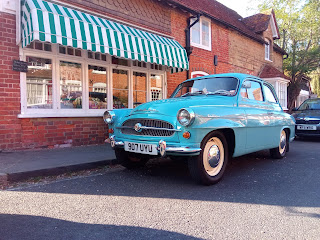 Posted by Richard Miller at 3:43 AM No comments: