I really struggled to identify this Japanese scoot and in the end can only find one likeness via a Japanese vintage vehicle dealer. It seems to be a C230 Mitsubishi Heavy Industries Model C230 with a 210cc engine. The brand name Mitsubishi used for their scooter division was Silver Pigeon.

The third and final day of our Trans European Trail mini-adventure. Day two was tough work in places so it was no surprise that day three started slowly but as we got in to the swing of things we were rewarded with some stunning trails, the first of the day being right across the top of the Brecon Beacons. 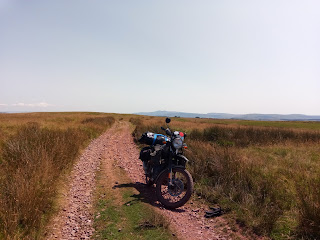 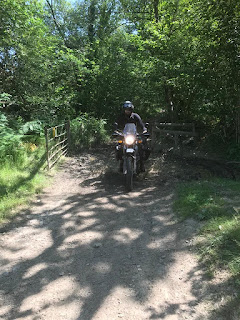 So that's it, three days of TETing. At times significantly harder than we had expected it to be. Wales really delivered the goods and I hope to return soon. Equally impressive were the Himalayans, they took everything we threw at them in good spirits and performed better than we had a right to expect them too.

A rather civilised camping holiday

It's still summer so it seems like a good time to publish this charming pic of folks enjoying their holiday. I would date the era as immediately pre-WW1. The bike is a lovely Humber with wicker sidecar and at best guess is from 1914.

A good nights sleep on our Forest of Dean hillside and an early start to make the push in to Wales. For some reason I woke with a cracking headache, I'll put it down to de-hydration from the heat of the previous day rather than the beers we enjoyed whilst soaking in the view from our camping spot. The headache was cured with an excellent brunch at Coleford and then shortly after the going got serious.

The TET joins the Offas Dyke Path and the going gets tough fairly quickly. We met a group of mountain bikers at the bottom of the path from where it climbs up to the top of the Wye Valley, they assured us that we would find the going difficult if not impassable on the Himalayans. Undeterred we gamely rode on only to have them overtake us five minutes later when we stopped to search for the spring from my sidestand which had come detached and allowed the stand to drag along the trail.

We found the spring but as it turned out the tang that holds the spring had caught on a rock and snapped off (it was indeed tough going). As we were zip tying up the stand one of the mountain bikers came back down to report a fallen tree a couple of hundred feet up the path. A shame as we were over the worst of the rough going but the tree was indeed impassable (we rode up and checked all the same). We had to turn tail and ride back down - not easy in itself on a steep, narrow rocky track with a bike loaded up with luggage. The tree rather looked like it had been down for quite a long time and it seemed as if it was left down to deter intrepid motorcyclists...

We rode back down to the River Wye and re-joined the TET further down the valley on another very stony path. This took us up to the top of the Valley from where we rode down narrow, winding asphalted lanes back to the river and crossed at Brockweir Bridge. Progress was now very slow going as the TET followed small lanes and we constantly needed to stop to confirm our whereabouts on the TET app - as in the previous instalment do sort out a phone mount for the app, it will save a lot of stopping and starting.
Once in Wales we followed a mixture of asphalt and green lanes, mostly steady going with a few short more challenging sections thrown in for good measure. Several of the lanes were quite hard to find and marked as private. In general we weren't sure which of the lanes were genuinely private and which had signs put up by landowners trying to discourage rights of access over their land. We settled on asking people if they were around - in some cases we got positive responses but in others polite denials. If no-one was around we trusted the maps and rode past the notices. 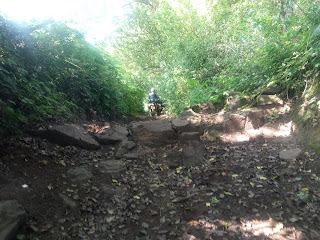 As with the previous day the heat took it out of us. Progress remained slow though due to the very regular route-finding stops plus an increasing number of gates (very annoying when you don't have a functional side stand). I guess it would not occur to most modern bike riders but personally as a piece of advice I would say that life on the TET would be extremely arduous without the benefit of an electric start.
Close by Newchurch we came across a beast of a descent, very steep and very rocky. It was almost a turn back moment but we walked it through to check that we could exit the other side and went for it. With a Himalayan the only way for this hill was down, there was no question of being able to turn around and ride back up. If stuck at the bottom the only option would have been to carry up.
We rose to the challenge and waddled and manhandled our laden bikes down the slope and made it to the bottom without major mishap. 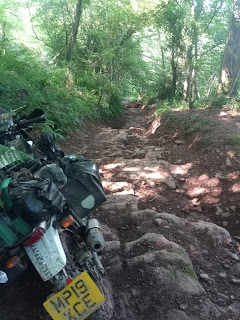 Matt has a fair deal more capacity than myself for off-roading but after this descent even he decided that it was indeed enough for the day and from there we hit the asphalt for a while and cut off from the TET once more. We decided to cut off the dog leg of the TET that goes down to Port Talbot and headed North with the Talybont Reservoir our target as a likely decent spot to camp.
Crickhowell proved to be a good spot to fill up with water for the camp, get in a couple of beers and grab a takeaway.
We rode up to the dam of the reservoir in search of a scenic spot, it was ok but it appeared that riding further onwards would yield better results. We had a recommendation from a couple in a van to camp at a bridge further up the road but it seemed a bit cheeky for wild camping and there was nowhere to leave the bikes bar the road. Thus we carried on in search of a spot, we rode over the mountain and back down the other side where there was a car park with lush grass and picnic benches set within woodland. It was deserted and ideal. We unpacked and settled down for an end of day beer before making camp. Within a few minutes of cracking the beers open we were attacked by midges. This caused us to flee and we had the idea that surely the mountain top would be free of biting insects.

We eventually found a decent enough spot at the top of Abercynafon, cracked open another beer and started to put up tents. How wrong we were, the little blighters were here too. By now we had rather too much committed to drinking beer to be able to carry on on the bikes so had no choice but to make camp. This was achieved in several stages (more than a couple of minutes in one place would result in an intolerable number of midges). Once the tents were up there was little real choice but to retire in to them early and escape.

Posted by Richard Miller at 2:10 PM No comments:

It's been a few years for me since I was last at Popham Megameet but I had good memories of it as a decent sized enthusiast focussed local one day show where a lot of the bikes are ridden in. Come the day rain was forecast and it almost looked like it wasn't worth setting off from home but having been starved of events for the last eighteen months or so off we went. In the end it only rained for the first fifteen minutes or so from the gate opening but sadly for the organisers it was enough to put a lot of folk off and attendance through the gates was low. A shame as the club stands were all there, the autojumble was pretty much there too and only the ride in exhibitors were low in number. So, there you go, a good day out in the open air, some interesting bikes and autojumble bargains to be had. If I can I'll be back next year. Below a few snaps of bikes that caught my eye... 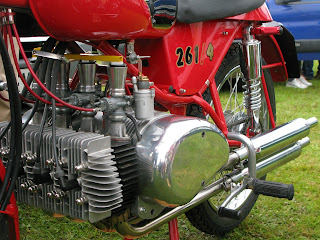 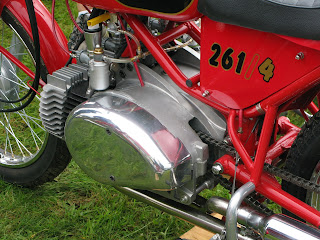 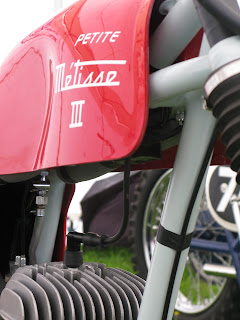 Just back from a few days break sightseeing up in London and one of the prime sights was this Cheney Triumph spotted in Soho. It looks very much like the bike is a daily rider, or at least a very regular rider. The bike is still riding full on motocross tyres, it'd be nice to think that it still sees some dirt every so often. Whoever the owner is, well done sir or madam for keeping old iron in regular use. 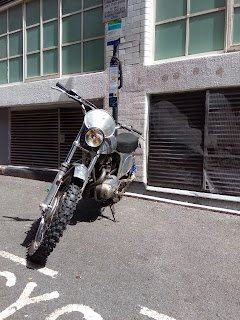 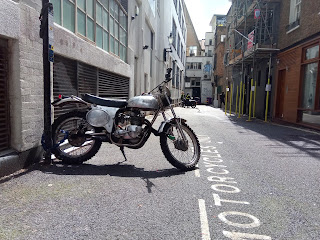 Posted by Richard Miller at 1:45 PM No comments: