Finishing a project is always a satisfying moment and bicycles offer easy wins over motors. This c1925 Labor took a while longer to complete than most as it was a bit of a wreck. Luckily the frame was sound but it had had a long a useful life as a 'porteur' followed by a period of poor storage when the wheels rotted into the ground. 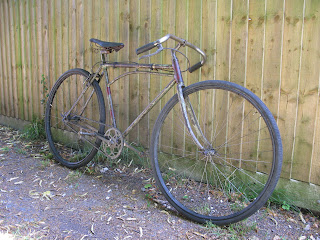 The bike mostly came apart ok but the handlebar stem was well and truly stuck. Direct heat was out of the question as I wanted to preserve the original paint as much as possible. Given that the stem was quite likely not the original it was chopped off, this allowed the forks to drop out and then was the time to get truly medieval with the stump of the stem. With a lot of heat, a large drift and a lump hammer the stem gave up the unequal fight.

The frame and forks were treated with evaporust - rags were soaked in evaporust, bandaged on to the frame and then the whole lot was wrapped in clingfilm and left for a couple of days. Overall a pretty horrible job to do but it worked nicely. After washing the evaporust off and drying down the whole lot was then given a beeswax finish to preserve and stop any further corrosion.

Once the frame and forks were sorted the other parts got the evaporust and wax treatment and it all went back together. Fresh wheels were found and are French from a similar period, the only snag being that the rims are 28 x 1 3/8". This size was used in France in the pre-war years and tyres are now very hard to obtain hence those that are fitted to the bike are a little past their prime. I found a supplier in Australia but the cost with postage and taxes was huge. Perhaps in the future the bike will receive a new pair of 28 x 1 1/2" rims which are fractionally smaller.

The only fly in the ointment of the project has been the lack of Labor head badge. So far I've not managed to find one so in the near future getting a replica made is on the cards if an original doesn't turn up.

Posted by Richard Miller at 10:09 AM No comments:

An unusual image and an unusual bike. From the surroundings and the bright sunlight this is fairly evidently not 1930s Britain, I believe the 'WBM' prefix number plate is from West Bengal.

And the bike? Obviously an Ariel, I believe an LB or MB either a 250 or 350 side-valve and most probably from 1931 or 32. Very rare bikes now, I've never seen one in the flesh. The first Ariel 'sloper' models had very radically canted forward engines before they move to a shallower angle as on this machine before up-righting the engines once more.