These pictures from the coffee stop at Leonardslee Gardens. Blue skies and an absolutely perfect days riding.


Posted by Richard Miller at 9:18 PM No comments:

Just some snaps from today's 80th anniversary Pioneer Run. A fantastic day's riding. Perfect weather and the new route avoided dual and triple carriageway roads wherever possible. Despite the heavy traffic there is something wonderful about riding a route lined with cheery spectators and the gathering of so many early motorcycles in one place is not to be missed.

The 1914 Sun Villiers performed perfectly for my run. The game little machine was let down only by the daft rider who ran out of fuel just after the coffee stop... Big thanks to the Belgian family with the Triumph who kindly agreed to let me buy some fuel from them, then filled the tank and refused any payment.

More pictures to come in subsequent posts but for now a few from the start at Epsom and a brief stop at Verralls.

The Abbins and their globe of death

The Abbins were a French Globe of Death act. Seemingly they were long term sponsored by Monet et Goyon for their bikes and had various sponsors for parts: in the case of this postcard by Brampton chains. Maurice Abbin toured his Globe extensively and certainly came over to the UK. Postcards were distributed as publicity for the act and for the sponsors.

Posted by Richard Miller at 11:18 AM No comments:

This year is hailed as the 70th anniversary of the Bullet. Though there were Royal Enfield models and even bicycles given the name pre-war, the Bullet as we know it today was introduced in 1949.

70 years back the Bullet was bang up to date with swinging arm frame, alloy head, cast alloy chain case and integral oil filter and tank. A way better spec than almost all other bikes on the market at the time.

To commemorate the anniversary the REOC are holding their annual International Rally as a special Bullet-focused event: the aim is to get 100 Bullets turning up. Given the number around that's not too ambitious a goal. In a shrewd move the International Rally is being held in conjunction with the VMCC's fabulous Founders Day event so rally goers get a two in one of attractions. 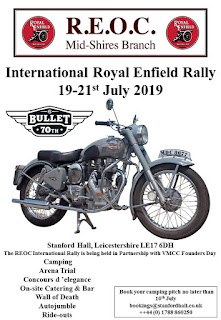 Posted by Richard Miller at 4:27 PM No comments: 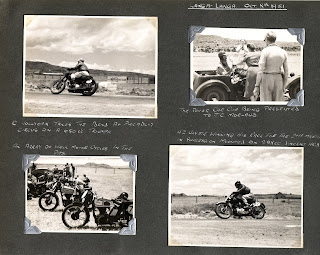 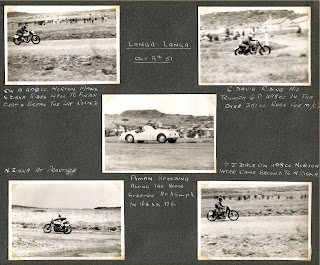 For a while I got quite into cyclemotors. I had a lot of fun attending cyclemotor runs with friends, really as much fun as I have ever had on more powerful machines.

The Teagle was a real hoot to ride. At a full 50cc it was one of the most powerful cyclemotors but still with a friction roller on the rear wheel. Really it was slightly too quick for a fifties roadster bicycle. Mind, trundling along the flat at a constant 25 to 30mph on a sit up and beg cycle is really a lot of fun.

Teagle were, and still are, an agricultural machinery company who saw the opportunity to diversify and cash in on the early post-war cycle attachment boom. They were already producing the 50cc motor for use in their hedge trimmers and chainsaws and it really did not take a lot of modification to put it on a bicycle.

The Teagle unit is very well made, rev happy and slightly hard work to start with its lack of clutch or decompressor. It also carries the distinction of being possibly the only 'motorcycle' to be made in the county of Cornwall. A rarity now but if you want a cyclemotor and find a Teagle for sale snap it up, you can't do much better. Though rare, parts are in relative easy supply due to vast numbers of this motor produced in other formats.


Posted by Richard Miller at 4:55 PM No comments:

A good solid motorcycle, the Royal Enfield Model G. This one a '51 or '52 model I believe. The earlier machines were noted for having a somewhat ugly and bulbous, though eminently sensible, unsprung front mudguard.

This photo is marked on reverse, 'March 18 1956', by this time the humble Model G would have been slightly old hat with its rigid rear.

From the vendor of the photo I got the information that the location is Leamington Hastings in Warwickshire and that the couple are his parents, Miss Doreen Rawbone and Mr David Hillier.

Posted by Richard Miller at 4:57 PM No comments: