An unusual image and an unusual bike. From the surroundings and the bright sunlight this is fairly evidently not 1930s Britain, I believe the 'WBM' prefix number plate is from West Bengal.

And the bike? Obviously an Ariel, I believe an LB or MB either a 250 or 350 side-valve and most probably from 1931 or 32. Very rare bikes now, I've never seen one in the flesh. The first Ariel 'sloper' models had very radically canted forward engines before they move to a shallower angle as on this machine before up-righting the engines once more.

Last year this event was billed as a massive post lockdown jumble, it was billed the same this year but we seem to be well past lockdowns now, or maybe I shouldn't speak too soon....
Either way it's always nice to ride over to a local jumble and the location of this one is a corker, nice flat fields next to the River Stour and not far from Wimborne town centre. Attendance seemed to be a little down on last year, I arrived late in the day so it's hard to say for sure. Awareness of the event was perhaps a bit low, at least amongst those I know. Not that I cared about any of it, there seemed to be more older bike stuff there this year and I managed to pick up a couple of really nice vintage twistgrips and a fifties AA East Africa motorcycle badge (yep, pretty esoteric I know) for very reasonable money.
An added bonus was that my Norton picked up the car park prize for second best British bike. I think this was maybe mostly due to me being around whilst the guys were judging it but an unexpected bonus none-the-less. As I favour the 'weathered look' for my bikes they don't often catch the eyes of any judges out there....

Posted by Richard Miller at 11:01 PM No comments:

Last Sunday was the SMCLCC's - http://www.salisburymotorcycleandlightcarclub.co.uk/ centenary show. Just a bit more than a centenary actually as the show had to be cancelled last year due to the pandemic.
A nice casual, ride in ride out, donations only kind of affair and a good way to spend a couple of hours on a Saturday afternoon. Below a few pics of some of the machines that caught my eye...

The same time last year Matt and I rode the Trans European Trail from Dorset to Mid Wales: it was so enjoyable that we came back for more this year. Last year we were both on Royal Enfield Himalayans but this year Matt has moved on and was on an AJP.

Once again we found ourselves riding in the middle of a heatwave, not as intense as last year and not an altogether bad thing as the normally damp Welsh trails were fairly dry which suited the Himalayan's dual purpose tyres nicely.

The key difference this time was that instead of wild camping we based ourselves at a campsite in Brecon and set out from there each day. The riding was considerably easier without luggage and there was the added bonus of not worrying about weight so much so it was possible to bring along a few more luxuries!

The TET in Wales branches off in several places. For the first day we elected to do half of the Llandovery / Brechfa loop. Some really beautiful routes over mountains and through forestry. A nice mix of easy and occasionally technical trails with a few streams to cross and rocky sections. Somehow it seemed easier than last year, I suspect the lack of luggage as opposed to any increase in rider skills was the root cause.

I had worried that the Himalayan would be far outclassed by the AJP but it took all the abuse thrown at it without complaint. Had the trails been damp I'm sure the standard tyres would throw up some problems but as it was all was good. If you wanted to press on then the AJP would no doubt be the tool of choice but at the sub 15mph speeds we were travelling (this is the speed limit for green lanes for both law and common decency) all was well.

And this is riding up the same track.
Trying to drift the Himmy for the camera and largely failing...
Day 2:
Today we started the TET from Llandovery once again and took the route headed North. This route took in the Strata Florida, reputedly the UK's finest green lane route.

This was near the start. The route was just easing us in...
The Strata Florida is noted for multiple river crossings
and a lot of deep puddles. I felt grateful we were riding it
during a dry spell. I can only imagine that it is nearly
impassable during wetter months.
The puddles tended to get deeper and longer as we
went further Northwards.
Yep, getting deeper.
It didn't take long for boots to become fully soaked.
From that point on anything challenging looking I walked
first before riding. After an earlier wetting of the Himmy's
air filter this one seemed a bit too daunting. Matt made it
on the AJP but I elected to try to go around. This particular
puddle was the only one with a, at least slightly, realistic
alternative route. All others just went straight through bogs.
As the Strata Florida goes further North it gets a
bit dryer but also rockier. The Himmy's sumpguard
earned its keep during this section.

Day 3:
For our last day it seemed like a good idea to finish off the Llandovery / Brechfa loop.
A nice shorter ride for our last day before heading home. The first part of the day went down much the same as day one. The occasional moderately challenging section interspersed with a lot of great scenery and happy trails and back roads. The end of the day though had a sting in the tail. 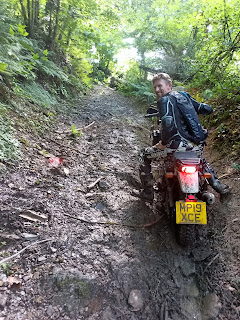 And this is where self inflicted disaster struck. I think hubris is the appropriate word. Really I know that I should have walked this track before riding it but cockiness took over having managed everything that was thrown at us thus far. To cut a long story short a very steep muddy and rocky track lead down to a stream. All OK so far. The snag came when there was a felled tree on the way up at the other side. Nothing to do but retrace tracks, except it was way too steep to make it back up... To be fair to the TET I don't think this trail was even on the route. Matt was on navigational duties having invested in a Quadlock to hold his phone. Only snag was that he had downloaded the route a couple of weeks previously. I downloaded it on to my phone just a day before leaving and the route had changed. Moral of the story is to regularly update the route on your navigational device and do navigation as a team without being a lazy sod and leaving it all to your mate! (yes, and also really don't ride headlong down a steep trail without knowing what awaits the other side...). 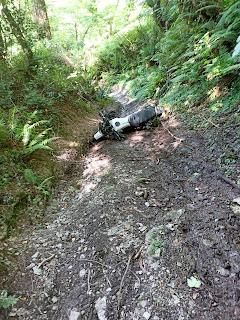 It's hard to get perspective on how steep a track is in a picture. Suffice to say this one was very steep. It was also rocky, rutted and muddy. We managed to edge the Himmy up a little with a lot of wheel spin and clutch slip - I'm amazed the clutch didn't burn out, quite a testament to the bike for it took a lot of abuse. There came a point at which it needed a lot of manhandling. Unfortunately Matt slipped over and landed on his coccyx so was very much out of action for lifting duties. Hmmm... this is where we really rued our lack of first aid kit...
A lot of tipping over, dragging and exasperation followed. We were close to giving up and walking to the closest farm to see if we could muster some kind of help. It really did look like we might have to abandon the bike down there for a while. In the end after much digging of the track, moving of rocks and physically dragging the Himmy up the slope on its side inch by inch we hit slightly easier going. At this point we discovered that the Himmy was happier going up without a 90kg rider so I walked alongside it. It was obviously tired of me and the abuse I had metered out over the previous three days. All in about two hours from bottom to top (about two hundred metres). Next though was to get the AJP up. We kind of expected it would sail up. But no. Granted it was a lot easier than the Himmy but it weighs about half as much. The walking alongside technique didn't work with the AJP and it liked my full weight right over the rear wheel (Matt was out of action for off roading due to his coccyx).

Despite being dragged sideways up a rocky slope the Himmy sustained no damage, not really even a scratch. I'm constantly amazed at its capability when pushed combined with its ability to then ride home at 70 fuss free on the motorway. Learning from this incident though was that it would be very handy to carry a block and rope or ratchet strap to winch out of problems. Also I guess I should add, don't get cocky and walk the tough looking sections first, especially if they are going downhill. The very minimum should be let one person go first. Imagine if we had been a group of Himmys all following like lemmings and had ended up with five or six unextractable bikes at the bottom of the valley....
The TET is time consuming and there's plently left uncovered for us in Wales, both further West and North so hopefully we'll be back next year for another dose.
Posted by Richard Miller at 8:33 PM 2 comments:

Vintage Car Night at the Cock and Bottle Morden

Fine weather usually brings out a great collection of vintage and classic cars and bikes to the Cock and Bottle pub in Morden, Dorset. Through the summer the meet runs on the first Monday of the month. Cars are predominant but there are some great bikes that turn up too. Nice for an event of this type is that the turnout of pre war vehicles is relatively high and there is always some intriguing stuff to chat about and ogle whilst wandering around with a pint. Below a small selection of 'eye catchers'.


Posted by Richard Miller at 11:26 AM No comments:

A Rudge Multi from the veteran era. Note the side saddle pillion 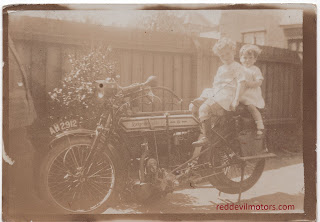 Spotted outside the Hard Luck Tattoo parlour in Kingston upon Thames this shovelhead Harley chop. I guess the condition is what some might describe as 'rat'. It looks like it is in regular use though, despite the rust it's all in very functional condition and I'm not seeing how it could easily be wheeled in to shop at the end of the day. If it is a daily, then due credit to the pilot, a beast of a bike to be using in London traffic. 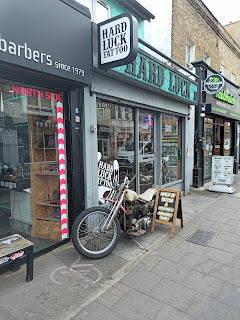 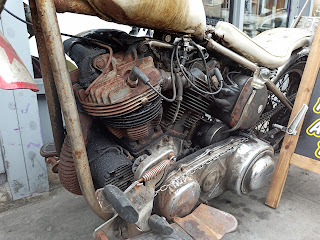 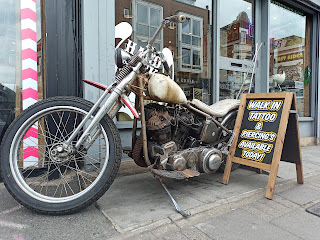 Posted by Richard Miller at 10:31 AM No comments: