BSA Golden Flash, the apotheosis of luxury motorcycle touring in the mid fifties. A solid dependable fast touring bike, quality made and capable of high speed. And to top it this one is fitted with a matching Avon handlebar fairing. The Golden Flash is a bike that is capable of keeping up with modern traffic so imagine the thrill of speed when a vehicle that would cruise more than 45mph was the exception and the majority of cars on the road were dull, black painted, side-valve engined sluggards.
This particular Golden Flash dates from 1956 or 7 - it has a full width front hub dating it as post '55, it still carries the distinctive gold coloured frame rather than the later black and it has the earlier pressed metal tank badges. 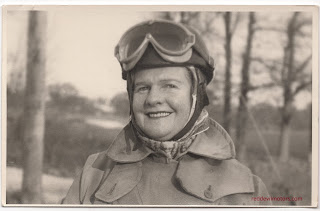