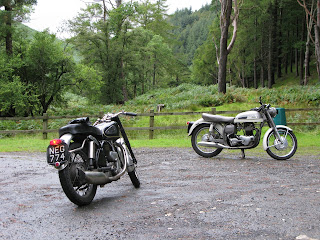 The time has come around again for a listing of excuses to pack up and head across the Channel on two wheels. Once again I haven't managed to find any decent calendar of continental events online so here is my humble offering. By no means comprehensive the listing has greatly expanded this year though it still simply represents a list of events that I have either been to in person, friends have been to, or I have heard good things about. If you have feedback or events you know of that should be included in the list then how about getting in touch. There's a noticeable shortage of events in the listing out in Eastern Europe and Scandinavia and I'd love to put this right.

Get out there and enjoy, don't be scared to take something old on a long trip, they were made for it, breakdown cover is a cheap and wonderful thing and there's a great joy to be had riding with friends on machines you've put together yourselves. Even roadside tinkering and repairs aren't so bad. Many of my personal greatest motorcycling memories come from long weekend jaunts across the Channel on old bikes... free camping in a French woodland and listening to a nightingale serenade us the whole night long, horizontal rain at the side of the road in northern France whilst trying to clean out a dirty carb, racing an Enfield through a Dutch tunnel listening to the music from the exhaust until a valve seized up and it had to be pushed out to the other side in darkness.. ah, happy times! Step on your bike and create your own adventures and memories. 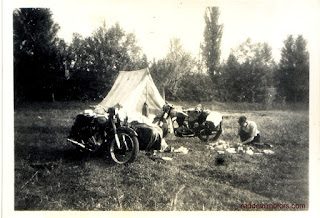 29 April to 1 May 2016: John Bull Rally, Belgium.
- Organised by the BSA Owners Club Belgium but open to all old British bikes. Gets great reviews.

13 to 15 May 2016: Paris Dunkerque Rally, France.
- An event for adventure bike types rather than classics but no reason not to take your old nail along. Non-competitive and looks like fun.

18 to 25 May 2016: Motogiro D'Italia, San Marino.
- Hooning around Italy on small bikes! Touring event for big cc lovers too. Route this year drops in to Croatia and Slovenia too.

21 and 22 May 2016: Coupes Moto Legende, Dijon, France.
- All old bike enthusiasts should visit at least once.

30 May 2016: Boulogne Bicycle Rally, Boulogne, France.
A leisurely and tipple fuelled trundle around the former Boulogne Grand Prix Circuit. There's no official website, the whole event is informal. There's a good account of it and some tips here though.

5 June 2016: Rando Cyclo, Sars Poteries, France.
- Event for those who favour fewer horsepower. Double check the date if planning to go, I always find it difficult to get info on this event. The best info I can find at the moment is here on this Mobylette forum. Good if you speak Dutch, if not get the google translate out. There's an account of last year's event here.
2 to 5 June 2016: MC Piston Cantabria Tour, Cantabria, Spain.
- I rode a MC Piston event a couple of years ago and it was great. Expect wonderful scenery, great hospitality and laid back but efficient organisation.

8 to 12 June 2016: Wheels and Waves, Biarritz, France.
- New wave custom and classic event. Now massive can they maintain the momentum?.

15 to 17 July 2016: Classic Bikes Chimay, Chimay, Belgium.
- Belgian vintage street racing. I went along a couple of years ago. Great fun, proper street racing, Belgian beer. Close to the town. Camp at the circuit for the full experience.

3 and 4 September 2016: Red Bull Alpenbrevet, Lugano, Switzerland.
- For me Red Bull is the Devil's own piss but don't let big corporate sponsorship put you off: a 1000 moped endurance run over Swiss Alpine passes must by its very nature be an awesome event.

26 September to 2 October 2016: MC Piston Rally Meeting, Santander, Spain.
- Rode this event a couple of years back. Excellent. Great atmosphere, hospitality and stunning roads. Opt in to the event as much as you like, the three day tour at the beginning was great. Very good value. Possibly the largest old bike road riding event in Europe.

2 to 9 October 2016: Rally de Colombres, Colombres, Spain.
- This is what the MC Piston event started out as. MC Piston moved the rally to Santander and some guys formed a club called Moto Club Indianos and carried on running it as it was.

16 October 2016: Moto Retro Leuven, Leuven, Holland.
- One day bike jumble. Date is provisional and not confirmed at time of writing.

18 to 20 November 2016: Salon Moto Legende, Paris, France.
- French show. The dates are provisional. No exact dates available at time of writing.
Posted by Richard Miller at 6:01 AM