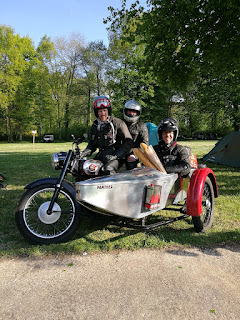 Spring has sprung and it is good time to think about saddling up and heading off towards adventure on an old clunker. This year's listing comes a bit later in the season than previous installments - apologies that a few events are already in the past but you could consider them for next year..

27 and 28 April 2019: Ventoux Classic, Mont Ventoux, France.
- Classic and vintage motorcycles racing up Mont Ventoux. What more could you want?

3 to 5 May 2019: John Bull Rally, Belgium.
- Organised by the BSA Owners Club Belgium but open to all old British bikes. Gets great reviews.

11 and 12 May 2019: Vintage Revival Montlhery, Montlhery, France.
- Absolutely wonderful pre-war car and bike event. One of the very best there is. Go!

24 to 26 May 2019: Paris Dunkerque Rally, France.
- An event for adventure bike types rather than classics but no reason not to take your old nail along. Non-competitive and looks like fun.

26 May 2019: Boulogne Bicycle Rally, Boulogne, France.
- A leisurely and tipple fuelled trundle around the former Boulogne Grand Prix Circuit. There's no official website, the whole event is informal. There are vintage cycle happenings in Boulogne the whole bank holiday weekend. A good account of it and some tips here.

26 May to 1 June 2019: Motogiro D'Italia, Italy.
- Hooning around Italy on small bikes! Touring event for big cc lovers too. Finishing the near 1000 mile course on a pre-57 sub 175cc is quite an achievement.

1 and 2 June 2019: Coupes Moto Legende, Dijon, France.
- All old bike enthusiasts should visit at least once.

2 June 2019: Rando Cyclo, Sars Poteries, France.
- Event for those who favour fewer horsepower. Double check the date if planning to go, I always find it difficult to get online info on this event. There's an account of the 2015 event here.

12 to 16 June 2019: Wheels and Waves, Biarritz, France.
- New wave custom and classic event. Fully corporate and sponsored to the hilt, never been but several mates have and it gets great reports.

7 to 13 July 2019: Milano-Taranto, Italy
- Like the Moto G but lower key and possibly more hardcore.

19 to 21 July 2019: Classic Bikes Chimay, Chimay, Belgium.
- Belgian vintage street racing. I went along a few of years ago. Great fun, proper street racing, Belgian beer. Close to the town. Camp at the circuit for the full experience.

20 July 2019: Red Bull Alpenbrevet, Lugano, Switzerland.
- For me Red Bull is the Devil's own piss but don't let big corporate sponsorship put you off: a 1000 moped endurance run over Swiss Alpine passes must by its very nature be an awesome event. Date tbc.


20 to 22 September 2019: Grossglockner Grand Prix, Zell am See, Austria
- Mighty historic alpine hill climb. There used to be bike entries too but they seem to have vanished from entry form. A shame as I would like to have ridden it. All the same, it should be worthwhile to turn up to spectate some impressive cars racing up the mountain. Dates tbc.

22 to 29 September 2019: International Piston Rally, Santander, Spain.
- I've had the pleasure of riding this event a couple of times. Brilliant. The MC Piston lads put on a great, friendly and efficiently run event. Not only that but it is fantastic value. If you like to use your old bike this is an event you will definitely enjoy.

6 to 13 October 2019: Rally de Colombres, Colombres, Spain.
- This is what the MC Piston event started out as. MC Piston moved the rally to Santander and some guys formed a club called Moto Club Indianos and carried on running it as it was.

Finally, other useful listings:
- The Dutch Veteraan Motoren Club has a good listing with some extra small scale local events too which may be work checking out.
- The Solexia site has a very comprehensive listing of French events, for all machines, not just Velosolexes.
- The Motards Montmorrillonnais site also has a long listing of French events.
- For Italian events (car and bike are listed) check the ASI site.
Posted by Richard Miller at 10:28 PM