Another ride in our local classic trial, the Hardy, organised by the Woolbridge Motor Club. This time passengering Matt's Wasp Yamaha outfit.

I last rode the Hardy in 2016; 2017 was a fallow year for the event so it was good to see it return. Motorcycle entries seemed to be a bit down on previous which is a massive pity as it is a wonderful event. This year Matt's Wasp outfit was the oldest bike entry at 1976.

The 2018 Hardy was about as good as classic trialing can get. Clear blue skies with a chill in the air but still mild for mid November, stunning scenery and some 14 sections spread over a 65 mile route. Conditions were fairly dry but the previous weekend's storm meant that there were a lot of leaves on the ground on the wooded sections and the going was slippery. We struggled a little on the outfit (largely down to rookie passengering) on several sections but did have a couple of surprising cleans. Our co rider Toby on his Honda XL250 breezed through most sections and it looks like he lost just one point the whole trial.

Passengering the Wasp outfit was a hoot, I'll be back for more whenever I have the opportunity, it's a lot of fun, occasionally frightening, fairly physical and tiring but well worth the effort and an experience to be recommended, so cheers Matt for the ride. 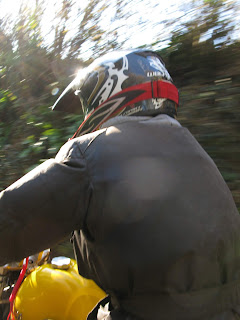 Posted by Richard Miller at 9:04 PM