The stars seem to be slowly aligning for an entry in the 2019 Pioneer Run. This is the planned for steed that I am kindly being lent by my father, a 1914 Sun. Having sold my Wall Autowheel two or three years back and singularly not managed to rustle up enough money to buy a new veteran I am relying on others' generosity to get a Pioneer ride.

The restoration of the Sun was completed several years back but for one reason or another it has not been used since, so time for some fettling to see if we had a viable ride or not.

The Sun has a 269cc Villiers motor mated up to a two speed clutchless crash gearbox. It has taken a couple of short sessions to get the bike running right.

First session we managed a few pops and bangs to accompany our experimentation with all permutations of throttle and ignition settings. Day two the ignition was further advanced and after much pushing we managed to get it going, snicked it in to neutral and had it running on the stand quite sweetly. It took a wide open throttle for the initial fire up but thereafter was content with just a whisper.

Next up time for the first ride, after some pushing and paddling along with the bike not willing to pick up we remembered that first gear was forward and not aft. Once in the correct gear the bike is now an easy starter!

Only a short test run so far but the Sun is a pleasant ride. Not far off in characteristics from a late thirties or forties autocycle. The engine is light and smooth, gear changes take a bit of getting used to but overall it is a sweet little bike. Time for some more fettling and test runs and then get that Pioneer Run entry sent off.... 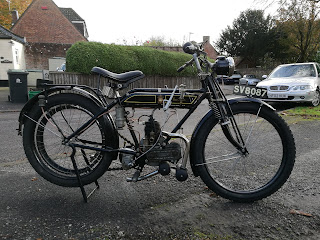 Posted by Richard Miller at 8:35 PM