Here's a bike made to be used. BSA v twin fitted with a tradesman's box sidecar. Heavily accessorised to be ridden every day and in all weathers

Hard to say if it is the 770 or 1000cc model but more likely the 770 as this was the bigger seller by far. Look at the enormous front mudguard, these were known as 'colonial style' to cope with the mud and dust to be found in far flung areas.

The bike has been updated with a drum brake from a later model, it would have originally had a dummy rim brake (see the mount on the forks for the lever). If it's a 770 the bike is a Model A and dates from approximately 1922 (dated on the front fork design which BSA phased out in 1923). 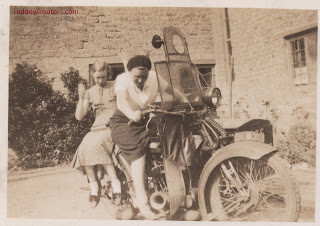 Posted by Richard Miller at 1:44 AM