I've been to Llandrindod Wells several times but have only just recently managed to make it to the National Cycle Museum situated in the town. The first visit to the town was as a useful halfway stop off point from home up to the Dragon Rally held in North Wales every February.

Since that first visit I've developed a real affection for the place; Llandrindod Wells really is, to use a cliché, an overlooked gem. Llandrindod is a nineteenth century spa town that was once as oppulent as the likes of Harrogate, the architecture remains but the pump rooms operate no more and there is but one Victorian era hotel still open. If faded grandeur is your thing, Llandrindod has it in abundance. Despite its decline Llandrindod is still a lovely place to have a walk around, the architecture is impressive, the gardens and bowling green well kept and charming and the views of the Brecon Mountains impressive. As a bonus the one grand hotel left, The Metropole, still keeps standards high and is a great place to stay and eat. If you like the film the Grand Budapest Hotel you won't be disappointed.

The above may read like a sales spiel but it comes from a genuine fondness. Visit the place, it's a good base for a holiday in mid-Wales. On to the Museum which occupies a portion of The Automobile Palace of Llandrindod. The building itself would be worth a visit even if the Museum was not there. Imagine, a small town such as Llandrindod once able to support a palace of automobiles! Be also sure to take in Pritchard's Garage a little down the road. 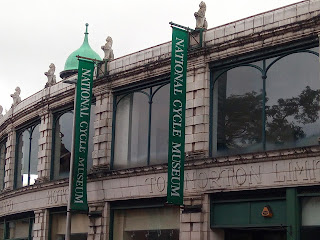 The Museum is enthusiast and volunteer run, it is well laid out so that one walks along a set route taking in the development of the cycle along the way. I guess a non-enthusiast would spend less than an hour inside but if you want to pour over the exhibits allow half a day. Absolutely no criticism of the Museum and the volunteers but I felt that it is a sad indictment of the low esteem of the bicycle in the UK that the Museum does not have a higher profile and funding. Think of the National Motorcycle Museum at Birmingham or the National Motor Museum at Beaulieu, both very different kettles of fish and essentially commercial operations but both very high profile and attracting tens of thousands of visitors a year. Maybe that is the fate of the bicycle in Britain, to remain the preserve of the enthusiastic amateur, and perhaps that is not a bad thing?

Anyway, on to the exhibits and apologies for the quality of the pictures - all done on a smart phone, the visit was rather unplanned and last minute...

Posted by Richard Miller at 5:48 AM