Something like a year ago, just before the first lockdown, I test rode a Himalayan at my local Royal Enfield dealers. I was impressed enough to want one but with my job in the balance and not much chance to get out and ride I deferred the purchase. Now more recently I've been having a bit of a 're-alignment' in the garage, the Buell has gone (up to a Scottish island) and so has the Yamaha AG200. Essentially, I've got too many projects, too many bikes to maintain and wanted some money to sample something different. Hopefully the Himalayan will prove to be low maintenance, perform the roles of multiple machines and bring joy and fulfilment to my life!!

Evidently the Himalayan is not going to provide the performance buzz of the Buell, nor will it be quite as off road capable as the Yamaha but so far riding it around does make me smile and it is a very competent bike. Normally to describe a motorcycle as pleasant would be to damn it with faint praise but the Himalayan genuinely fits the description. Equally adequate is a word that does not inspire a great deal of excitement, but that is what the Himalayan's performance is. The power of the bike is adequate in that it is appropriate and it is delivered in a way that promotes user satisfaction. Riding is slow motorcycling in the same sense as slow cooking or slow television. The pace is enjoyable and relaxing and the experience leaves you in no way missing higher power and speed.

Proof of the pudding will come with taking the Himalayan off road and testing its off the tarmac capabilities. I have a feeling that they will be adequate too! 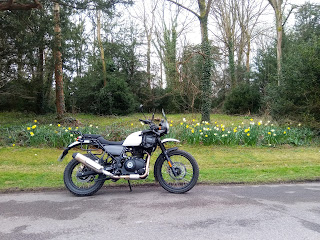 Posted by Richard Miller at 8:43 PM