Here's the brochure / flyer for the Itom Astor 4M. A racy number and no doubt. Itoms were the tool of choice for the clubman 50cc racer through the 50s and 60s. Most of the Itoms raced started off as road going models, it took little to prepare them for the circuit as they were already powerful machines for their size and Itom offered several race kit options.

The Astor 4M was introduced in 1965 and continued through to '72. In standard trim it was good for just shy of 100km/h and pushed out nearly 6hp, more than the magic 100hp per litre. A four speed box allowed good use of what must have been a relatively narrow power band (it would scream up to 10,000rpm). 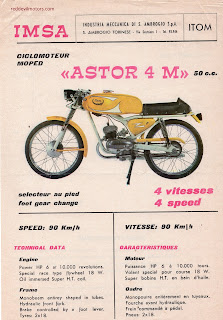 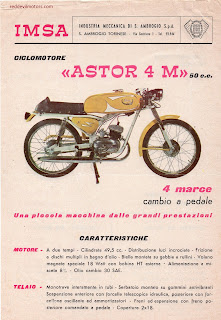 Posted by Richard Miller at 3:14 PM