I recently had a lucky find (thanks to James Kelly for the tip off) and picked up four early cycles that had been rotting away in a barn in France. Thankfully I didn't have to go over to France to get them as another chap had already done that hard work. It would have made a nice trip in other times but not during the pandemic.

The first I'll feature here is a Peugeot from, as far as I can work out, 1905 or 6. Luckily this cycle has survived reasonably well apart from some damage to the handlebars - sadly a couple of the the others in the haul are in a slightly more sorry state.

I'm a bit of a stranger to French cycles and had to get help from the VCC facebook group to identify. I've got to confess that I had thought it was a bit earlier as when comparing to British cycles of the period it looks to be at least five years older. It seems that British fashion was towards luxury and the French favoured minimalism. What appears to identify the age of the cycle is the fork crown - it is brazed up whereas pre-1905 models had a cast crown. Anachronistically the Peugeot still uses a block chain with skip tooth chainwheel. Looking around at other Peugeots pictured on the net a lot of folks date their Peugeots earlier than they actually are, probably due to a mixture of lack of knowledge / resources and wishful thinking. In all honesty I had desperately hoped that this would be a cycle I could join in with the London to Brighton veteran car run on (needs to be 1904 or earlier).

This site was a great help in helping to date the Peugeot too: https://www.bikeboompeugeot.com/index.html  The remit of the site is Peugeot cycles of the sixties and seventies but there is a great library of early brochures too.

It seems like the Peugeot is a Model A which came in a very basic spec with no mudguards or indeed brakes. This one though shall receive something to slow progress at least on the front wheel. All Peugeot frames except the chainless models seem to be the same though so a pair of drop handlebars could convert this into a more desirable racer.

The plan is to give the Peugeot a sympathetic restoration and get it roadworthy again with a minimum of fuss. From a quick scan of the condition it shouldn't be too challenging.

Apologies for the poor quality photos. Taken on my phone in the rain as the cycles were dropped off at a lock up. 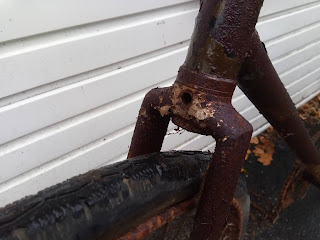 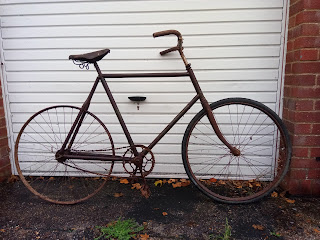 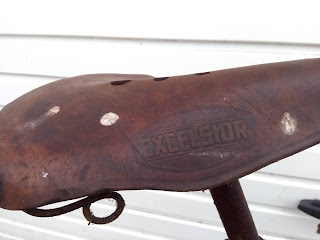 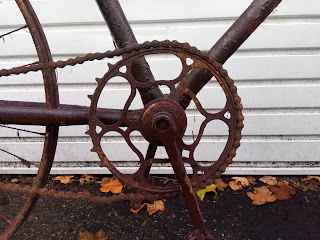 Posted by Richard Miller at 1:30 PM No comments:

Here's a BSA Model K 550cc side valve combination doing exactly what is was deisgned for - providing dependable family transport. Not 100% sure of the year of the bike, hard to say but it looks like a chain drive bike - chain drive was introduced on the K in 1914 and ran concurrently with belt drive as an option for several years. Most likely this bike is early post-WW1. It's nicely accessorised with a lighting set and klaxon atop the petrol tank.

Posted by Richard Miller at 3:51 PM No comments:

I picked up this sweet little Manx style fly screen recently. It had been fitted to a Velo previously. Sadly though when I tried it out it turned out to have been a Velo with a quite different headlight from mine. Undeterred I set about modifying and this is the result. I wanted to tilt the screen back a bit. With a plain round hole for the headlight rim it wants to sit pretty much bolt upright. It looked a bit odd that way so I set to with a jigsaw. It's quite hard to imagine, draw and cut a suitable elipse on a flyscreen that will give the right angle of lean. I'm fairly happy with the outcome, just don't look too closely at the cut - rubber trim can however hide a whole range of sins... 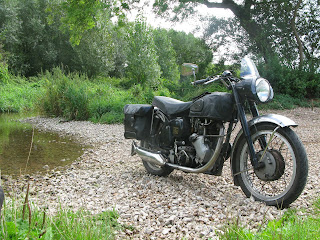 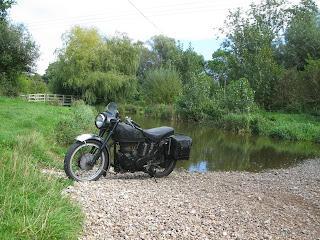 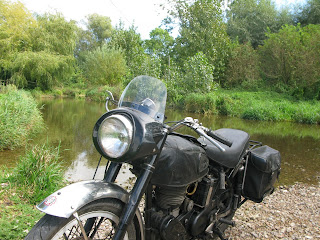 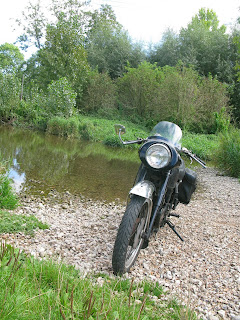 Posted by Richard Miller at 9:57 PM No comments:

Yes, shocking indeed. And a slightly risqué flirty message on the rear. 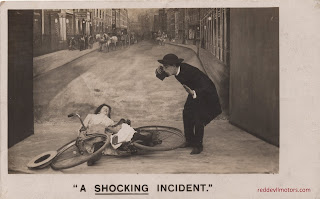 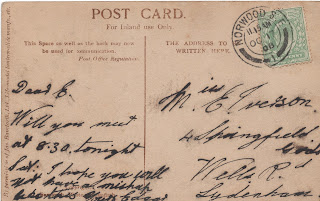 Posted by Richard Miller at 8:04 PM No comments:

I bought a few old bike books recently in a bundle and and discovered some cuttings mingled up with everything else. A couple of which were these illustrations of an ohc v twin motor. It's a wonderful looking engine but not familiar at all to me, a bit like the Koehler Escoffier pre-war racing motor but not quite the same. I feel it is a what could have been flight of fancy on the part of the illustrator and what a lovely machine it would have made... 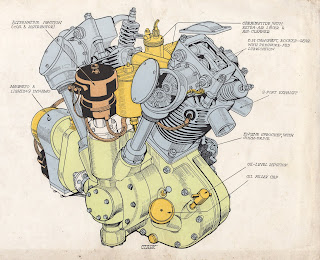 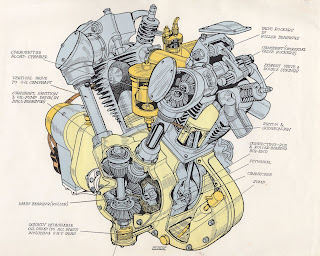 Posted by Richard Miller at 10:15 PM No comments:

Here's a big Duggie. As far as I can tell one of the 4hp (600cc) models that was introduced in 1915 in response to the need for a bigger engine for use as a sidecar tug than the popular 2 3/4hp model. The 4hp model was continued through until 1923. Not too sure of the year of the bike in the photo but more than likely it is a post WW1 model (civilian production was paused for the latter two years of the war). 1919 perhaps? The very furry clothing style of the lady aboard the bike seems to be from the early twenties.

It must be a sign of encroaching old farthood that recently I felt a need to return to the place of my studies (Colchester in Essex) to see how the place had changed since I was last there (>20 years, yeesh!) The answer is that I'm really not sure as late forties me has significantly different priorities of where to go and what to see from the early twenties me more concerned with parties and getting high...
The above ramble is leading to breaking the journey home with an impromptu visit to the Battlesbridge Antiques Centre, well worth a visit if you have even a passing interest in old junk. Bimbling around looking at the the myriad of units selling wares that could assist in the ongoing project of further cluttering up an already overcrowded home we stumbled upon the Battlesbridge Motorcycle Museum. Stumbled upon is a bit disingenuous as I already knew of its existence as somewhen in the distant past I had already visited. However the Museum has moved location slightly and was supposed to be closed mid-week. Officially it is only open on Sundays but being an enthusiast run place if any of the volunteers fancy coming along for a while it opens up. A nice informal way to operate but obvs if you are planning a visit on any day but Sunday and have any distance to travel best call in advance to check..
The Museum contains many volunteers' machines and is wonderfully eclectic, there are some bikes of real rarity there too. It is small but they manage to cram in an awful lot of bikes along with a great collection of memorabilia. A visit is time well spent and highly recommended.


Posted by Richard Miller at 10:13 PM No comments: